Skip to content
Previous Next
M13, The Hercules Cluster 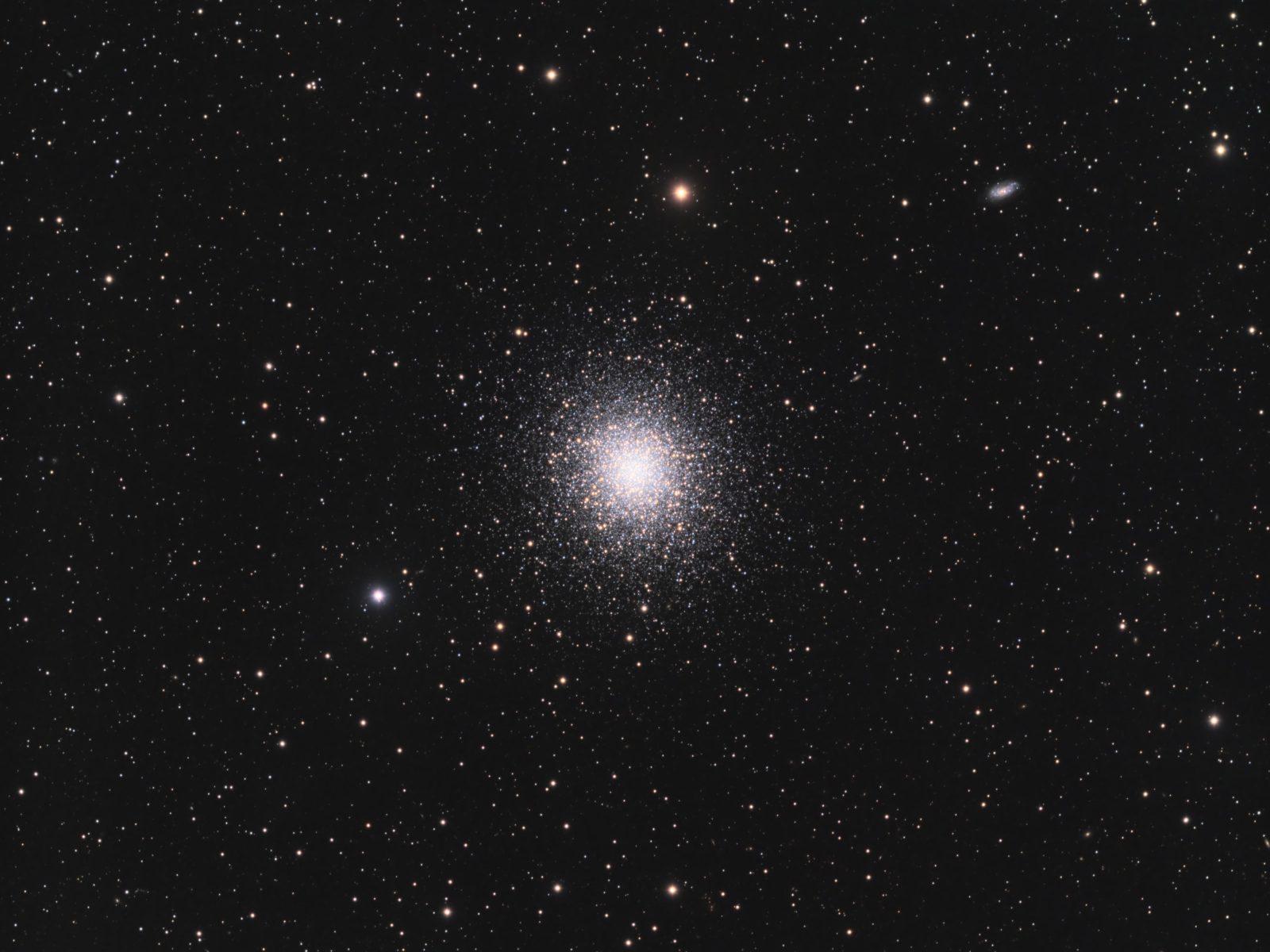 There are about 150 globular clusters orbiting the main part of the Milky Way, and they are common around other galaxies too.  These objects are star clusters of a few hundred thousand to a few million stars and they are very old objects.  The Hercules Cluster, M13, is arguably the finest globular cluster visible from the northern hemisphere but lots of people, including me, have other favourites, like M5 and M22. M13 lies about 22,000 light years away from us, and is about 2/3 the width of the full Moon.It contains about 600,000 stars and is about 168 light years across. The night sky would be very interesting from a star in the core of that cluster!

M13 is visible to the naked eye in moderately dark skies, obvious in binoculars, pretty in a small scope and stunning in a big scope. It’s one of my favourite objects to look at through any instrument.

Sharing the limelight with the likes of M13 must be tough, but there are many faint galaxies in the distant background that are visible in this shot, some of which are highlighted in an annotated image.

This includes the first light images from May 2018 using my Sky-Watcher Esprit 150 f/7 refractor and QHY 16200-A camera, with most of the data being collected in April-May 2019.

Image scale: 1.15 arcsec per pixel for this camera/telescope combination.

Data Reduction and Cleanup
The BatchPreProcessing script was used to perform calibration, cosmetic correction and registration of all frames. ImageIntegration was used to make the R, G and B masters, and the three L masters (made from 3m, 5m and 10m exposures, respectively). DynamicCrop was used to crop all the masters identically.

Lightness:
Creation and cleanup of HDR: The 3m, 5m and 10m L masters were combined using the HDRComposition tool with default settings.

Deconvolution:  A star mask was made to use as a Local Deringing Support image. A copy of the image was stretched to use as a range mask. Deconvolution was applied (80 iterations, regularized Richardson-Lucy, external PSF made using DynamicPSF with about 30 stars).

Dynamic Range Compression:  HDRMultiscaleTransform was applied to a clone of the image, which was blended back into the original with pixel math 4 parts original to 1 part compressed. A mask was used to limit the blending to the core of the globular cluster.

Combining Lightness with RGB
The processed Lightness image was applied to the RGB image using LRGBCombine.

Sharpening:  MultiscaleLinearTransform was used to sharpen the stars in the core of the cluster using a highly blurred range mask to protect all other parts of the image. Bias settings at default except layers 2 and 3 at 0.05.