Skip to content
Previous Next
NGC5907, The Splinter Galaxy 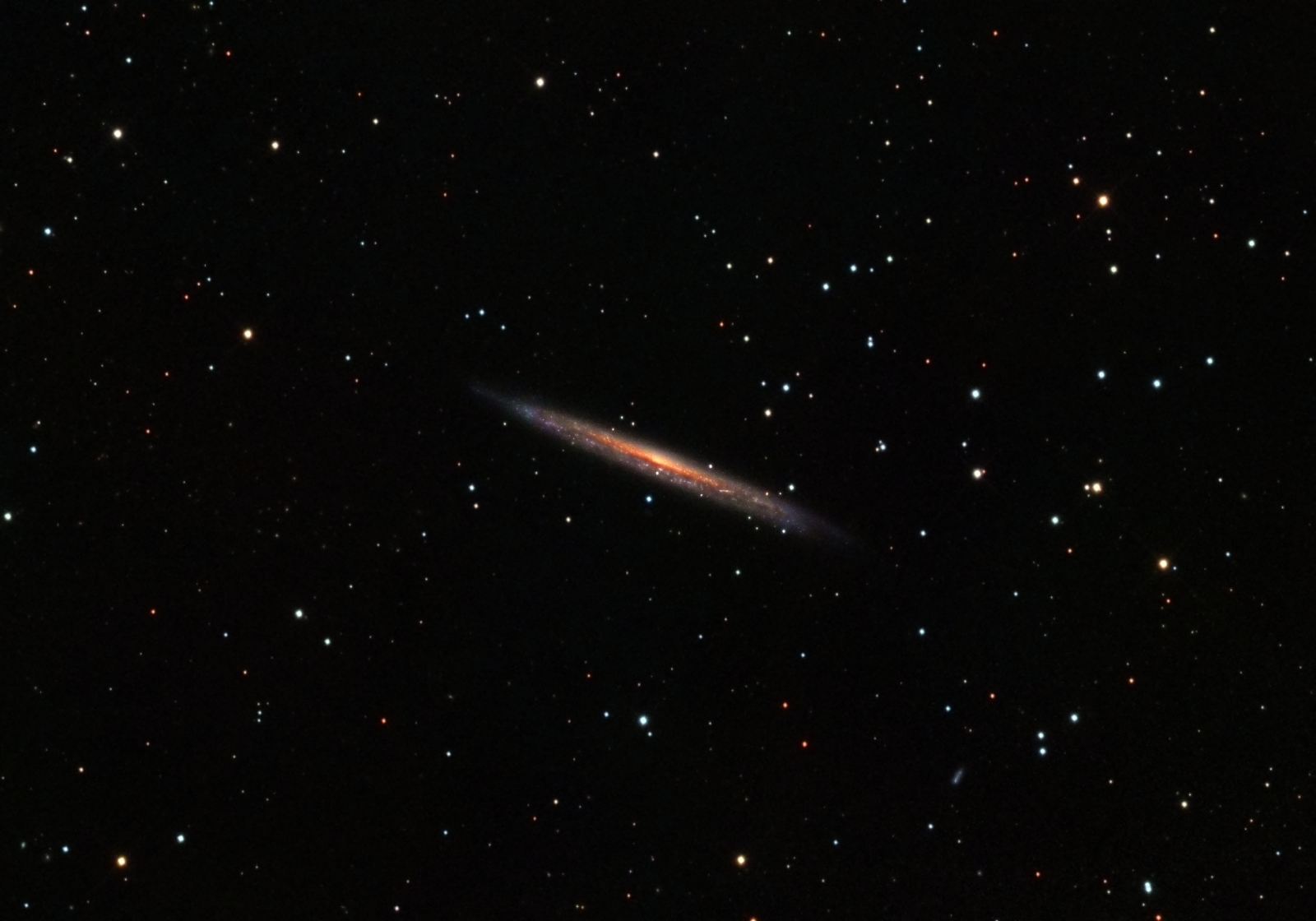 This spring gem is the Splinter Galaxy, NGC5907.  NGC stands for “New General Catalogue,” and it’s a catalogue of thousands of deep sky objects.  When I look at this galaxy through a telescope, it looks like a toothpick.  The photo brings out much more detail, including a bright core and a prominent dark dust lane.  It’s about 50 million light years away and the Wikipedia entry for it says it seems to made up mostly of white dwarf stars.  These are small, dense stars nearing the end of their lives.  They eventually lose all their heat and ability to fuse elements, and get cold and dark. Spring galaxy season will soon come to an end.  This is likely the last galaxy I will capture for awhile, because the moon is getting big and bright.   Globular clusters are becoming prominent (for example, M14, which I imaged just a few days ago). This image combines luminance (brightness) data acquired in May 2014 using a clear filter with colour data from 2011.  The telescope, camera and mount was changed within that time.  An interesting project to combine all this data, but I think the result is nice.

RGB:  5x10m in R, G and B acquired unbinned with a QSI583wsg camera and Astrodon RGB filters through an 8″ f/8 RC on a MI-250 mount, from my SkyShed in Guelph in May 2011.  Crescent moon no cloud, poor transparency and below average seeing.  MaximDL was used for acquisition, guiding, calibration, alignment, stacking and colour-combining.  A QHY5 camera was used to guide through the QSI’s guide port.

The R, G, B and L filesproduced in MaximDL were each background-corrected with DynamicBackgroundExtraction, registered and cropped.  R, G and B were combined into an RGB image and colour calibration applied and stretched using HistogramTransformation followed by ColorSaturation.  The Luminance image was processed with deconvolution using a custom PSF made from DynamicPSF command, and thenstretched with HistogramTransformation.  ACDNR noise reduction was applied with a radius of 0.5 px to remove small scale noise. Luminance was extracted from the RGB image, matched to the L image with LinearFit, and then added back into the RGB image using Channel Combine in the Lab space. LRGB Combine was used to add Luminance to the RGB image, and contrast and colour saturation were adjusted using Curves.  Linearized Multiscale Transform was used to sharpen the galaxy slightly.

Image scale is about 1.1″/pixel for this camera-telescope combination.