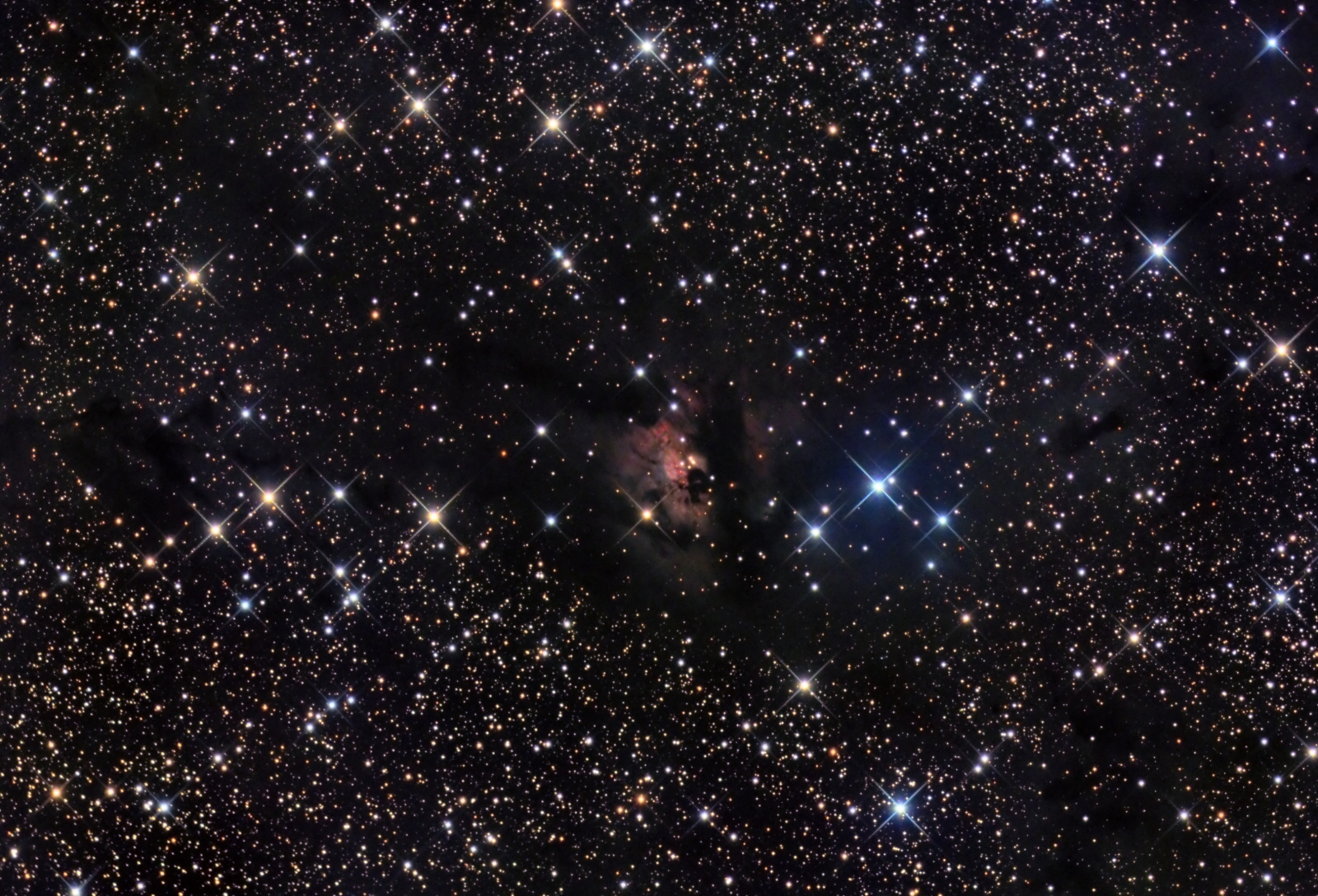 The centre of this image shows the diaphanous Sh2-187.  It lies about 4,700 light years away in Cassiopeia.  The nebula at the centre is surrounded by a large molecular cloud containing hydrogen, dust and soot.  This is evidenced by the dark lanes throughout and the faint bluish reflection nebula in the right hand third of the picture.  The dark nebula has a catalogue number — LDN1317.  This is another one of those objects that I couldn’t find much information about, and it isn’t imaged very often.

Between moonlight and bad weather it has been challenging to collect enough light to show off the rather faint objects I have been after.  This took about 4 weeks to acquire.  Luckily there are a few clear, moonless nights in the forecast, so I should have another nice image to share soon.

Acquisition with TheSkyX.  Focusing with FocusMax4.  All pre-processing and processing in PixInsight.  Acquired from my SkyShed in Guelph, ON.   SBIG STL-11000 with Baader LRGB and Ha filters.  10″ ASA @ f/6.8 on a Paramount MX.  Guiding with SV-80 80 mm f/6 refractor and cameras Remote Guide Head.  Imaging runs were scripted using CCDCommander.   No moon for LRGB, near full for H-alpha.  Transparency and seeing  good for R, G and B and excellent for L and H-alpha.

R, G and B were combined, and RGB, L and Ha were background corrected with DBE.  The NB-RGB Combine script was used to combine the Ha and RGB data (Ha scale of 1.2).  The resulting HaRGB file was processed with colour calibration, HistogramTransformation, ACDNR (small scale), another HistogramTransformation, and a curve to boost contrast and saturation.

The L image, which was background-corrected earlier, was processed with deconvolution using a PSF made with the DynamicPSF command and about 30 stars.  The image was then processed with LinearMultiscale Transform for slight noise reduction, followed by a histogram stretch and TGV noise reduction.

The LHaRGB image was then separated into large and small scales and contrast and saturation applied to the large scale boost the nebula.  After recombining, Pixel math was used to substitute any clipped pixels for unclipped pixels from the original LHaRGB file.  This “declipped” version was tweaked for contrast, brightness and saturation.