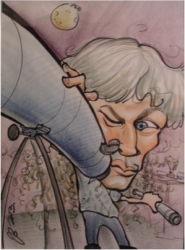 I was always interested in astronomy, but didn’t do anything much about it until January 1998.  Two things happened at that time.  First, my infant daughter cried a lot at night, so I spent a lot of time walking up and down the driveway looking at the stars (I live outside the city of Guelph).  Second, I ordered what I thought was a toy scope for my 3-year old son using Visa points.  What arrived was a 4.5 inch reflector.  Although the mount was terrible, I got breathtaking views of Saturn, Jupiter and  the Moon.  A friend gave me the book Nightwatch, which had a sidebar article called “Junk Scopes From Asia” accompanied by a photo showing MY scope! I realized that it was not my ability, but the inferior mount that was the problem, so I bought a serious scope: a Celestron Ultima 2000, one of the first fully goto scopes on the market.  The views blew me away.  I was hooked.  I never thought I’d get into astrophotography.  I remained a visual-only observer until about 2006, when I began to dabble with shooting the moon with a point-and-shoot camera held up to the eyepiece by hand.  Before getting into astrophotography I sketched quite a lot.  I still occasionally sketch the Sun, Jupiter and Saturn. I have been hunting deep sky treasures with my camera and telescope for many years now, and have used just about every type of camera, scope and mount, and many different software packages.  I currently use a QHY-16200A mono camera with Optolong filters for my deep sky imaging. I shoot through a Sky-Watcher Esprit 150 f/7 refractor using a Paramount MX mount, and my equipment is housed in a SkyShed at my home.  I use CCD Commander to automate my imaging runs. I use a 50mm f/8 Solar-Scope H-alpha telescope for imaging the Sun; my camera for solar and lunar work is the Celestron NexImage 5.   I use PixInsight for processing my deep sky images.  I often look through the eyepiece while my camera is imaging, using 6″ and 20″ Dobsonian reflectors.  Refreshingly, they have no electronics, and work best with a star atlas, a red flashlight and a finder scope. I am honoured that my images and articles have appeared in many magazines, journals, books and calendars as well as on the cover of the 2019 Observer’s Handbook, published by the Royal Astronomical Society of Canada. One of the things I enjoy the most about imaging is the ability to share my views of the cosmos with others.  I hope you enjoy viewing my images, and reading about their subjects. And now, I’m going out to the Dog House… Clear skies, Ron