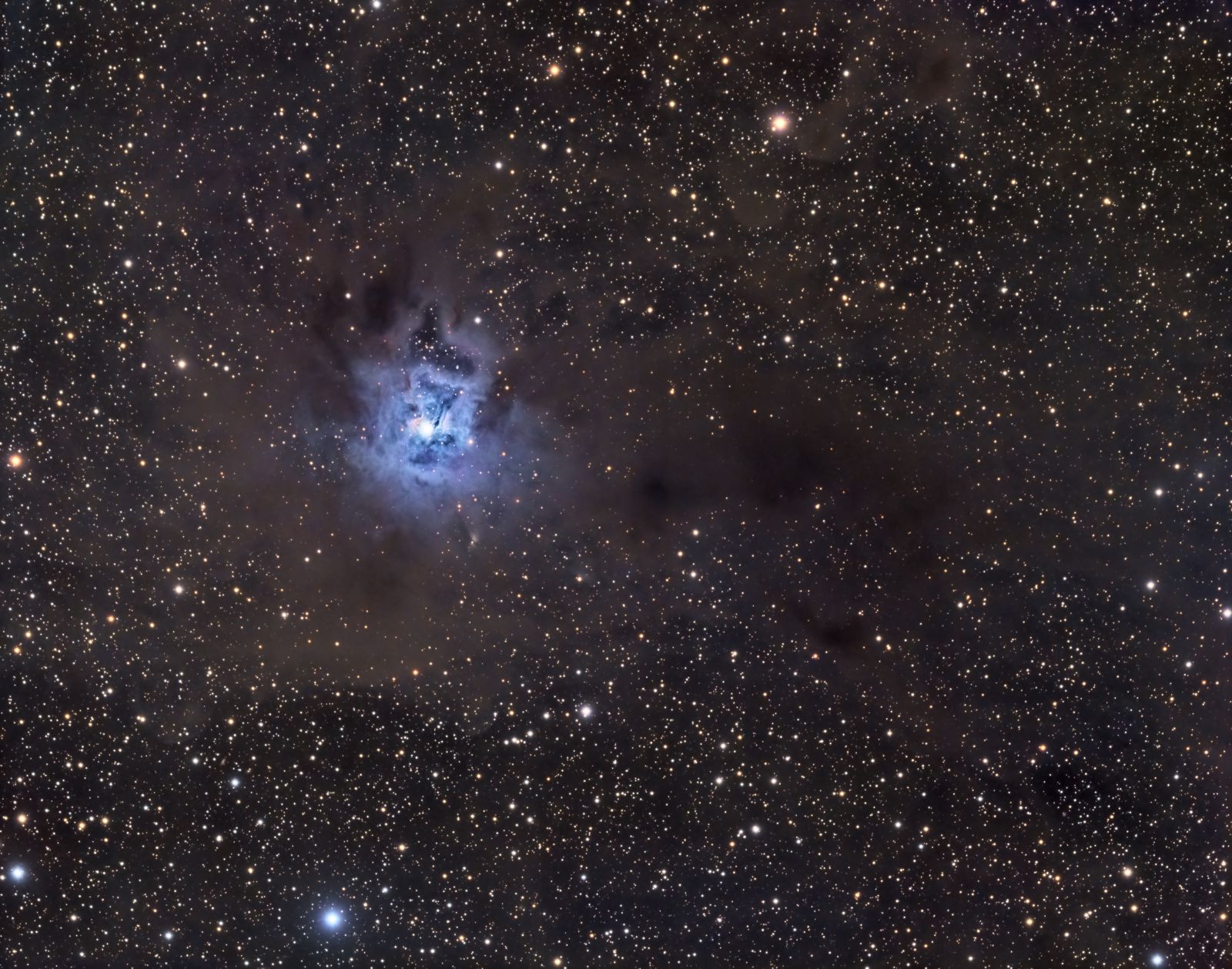 This is the Iris Nebula, NGC 7023. It is a reflection nebula, the blue coming from light reflected off soot/dust behind the bright star.  There is lots of soot and dust surrounding the Iris Nebula, which is visible throughout the image. This nebula is in our own Milky Way galaxy, and is relatively close at about 1,300 light years from Earth.  The star at the centre of the nebula is easy in binoculars, but the nebula itself is very challenging to see visually. I imaged this object in 2013, but covered a relatively small field compared to this version, which does a better job at showing how dusty this region of space is.

Sky-Watcher Esprit 150 f/7 refractor, QHY 16200-A camera, Optolong L, R, G and B filters, Paramount MX, unguided. Acquisition, and focusing with TheSkyX. Automation with CCDCommander. Equipment control with PrimaLuce Labs Eagle 3 Pro computer. All pre-processing and processing in PixInsight. Acquired from my SkyShed in Guelph. No Moon, average to above average transparency and average seeing. Data acquired May 25 – June 4, 2019.

Data Reduction and Cleanup
The BatchPreProcessing script was used to perform calibration, cosmetic correction and registration of all frames. ImageIntegration was used to make the L (1m-, 5m- and 10m-), R, G and B masters. DynamicCrop was used to crop all the masters identically. DynamicBackgroundExtraction was applied to each master twice, with Division followed by Subtraction. HDRComposition was used to blend the three luminance masters into an HDR luminance master, referred to as HDR below.

RGB
Creation and cleanup:  The R, G and B were combined with ChannelCombination to make an RGB image which was then colour balanced with PhotometricColorCalibration.

Deconvolution:  StarMask was applied with default settings to produce a Local Deringing Support Image. A clone of the HDR image was stretched to use as a deconvolution mask. Deconvolution was applied (80 iterations, regularized Richardson-Lucy, external PSF made using PSFImage script with 50 stars).

Dynamic Range Compression:  HDRMultiscaleTransform (6 layers, to lightness, lightness mask) was applied to a clone of the image using a mask to target the brightest part of the Iris Nebula. The compressed clone and original were blended 1:1 using PixelMath with rescaling, and a mask to protect the remainder of the image.

Sharpening: MultiscaleLinearTransform targeting the lightness channel was used to sharpen Layers 2 and 3 with strengths of 0.05 for both. A mask was used to limit sharpening to the core of the nebula.

Final Steps: Background, nebula and star brightness, contrast and saturation were adjusted in several iterations using CurvesTransformation with masks as required. The DarkStructureEnhance script was applied with 8 layers and a strength of 0.15.