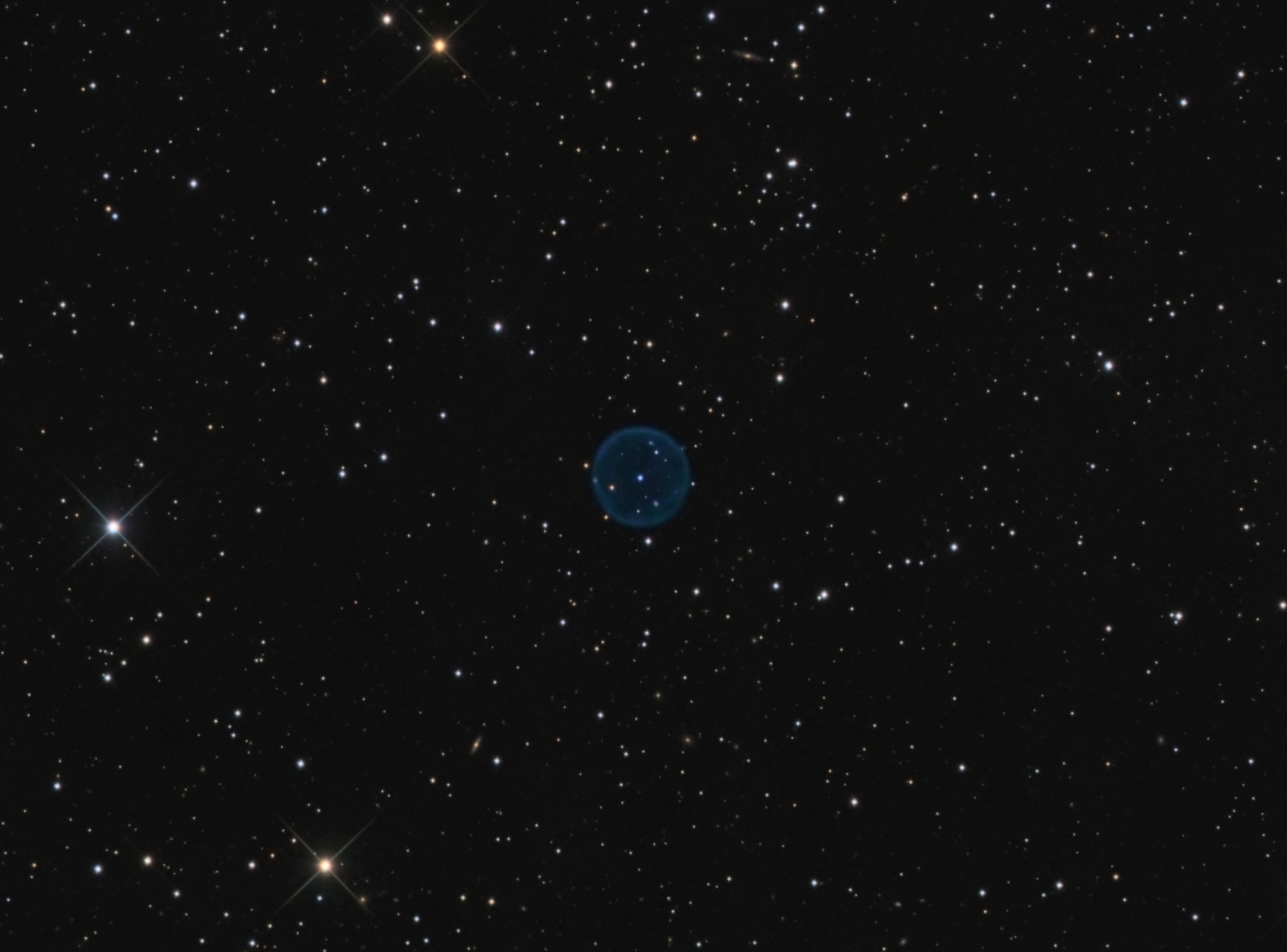 Never before have I photographed anything that looks like this beautiful, round planetary nebula, Abell 39.  The central star is very close to the centre of a nearly perfect sphere — one the largest known spheres, at about 2.5 light years diameter.  The central star is slightly off-centre, thought to be due to ejection of material from one side of the central star.  You’ll also notice that the nebula’s edge is not uniformly bright, with the top being significantly  brighter.  The colour of this nebula is due excited atoms of oxygen which emit light that appears teal.  The oxygen was released from the central star during its evolution into a white dwarf.  Even though oxygen’s glow dominates the nebula, oxygen is twice as abundant in our own sun.  This planetary nebula is about 6,800 light years away in the constellation Hercules.   It is about 1/15th the diameter of the full moon, and will continue to expand and dissipate.

There are dozens of galaxies in this image, including a few visible through the nebula itself.  All of these are far in the background, as the nebula is in our own back yard, in the Milky Way galaxy where our Sun resides.

Initial Processing:
L, R, G and B masters were cropped and processed separately with DBE.  The R, G and B images were rotated 90 degrees, processed with the CanonBandingReduction script, and then rotated back to their original orientation.  They were combined to make an RGB image which was processed with DBE and ColourCalibration.  HistogramTransformation was applied to make a pleasing yet bright image.  TGV Noise was applied and the image was re-stretched to reset the black point.

Linear Noise Reduction:  MultiscaleLinearTransform was applied to reduce the noise prior to stretching

Combining SynthL with RGB:
LRGBCombine was used to apply the SynthL to the RGB image, default settings except chrominance slider reduced to 0.34

Final Processing
A range mask was produced that allowed the brightness and colour saturation of the nebula to be increased without affecting the background.  Then overall contrast was increased and brightness decreased slightly with the Curves tool.  Saturation of stars was then increased.  This revealed a slight misalignment of channels, which was corrected using ChannelMatch.  Magenta artifacts on a couple of bright stars were corrected by reducing saturation through a magenta-correction mask.  The magenta-correction mask was made by multiplying the output of the ColorMask script (set to magenta) with the deconvolution local support file and then blurring slightly using convolution.  This mask was black everywhere except where the bright magenta artifacts were located.  SCNR was used with the Local Deringing Support file as a mask to reduce green artifacts on some bright stars.  The background was slightly smoothed using a Pixel Math expression to lighten the very darkest pixels as follows:

A final curve was then applied to increase contrast.