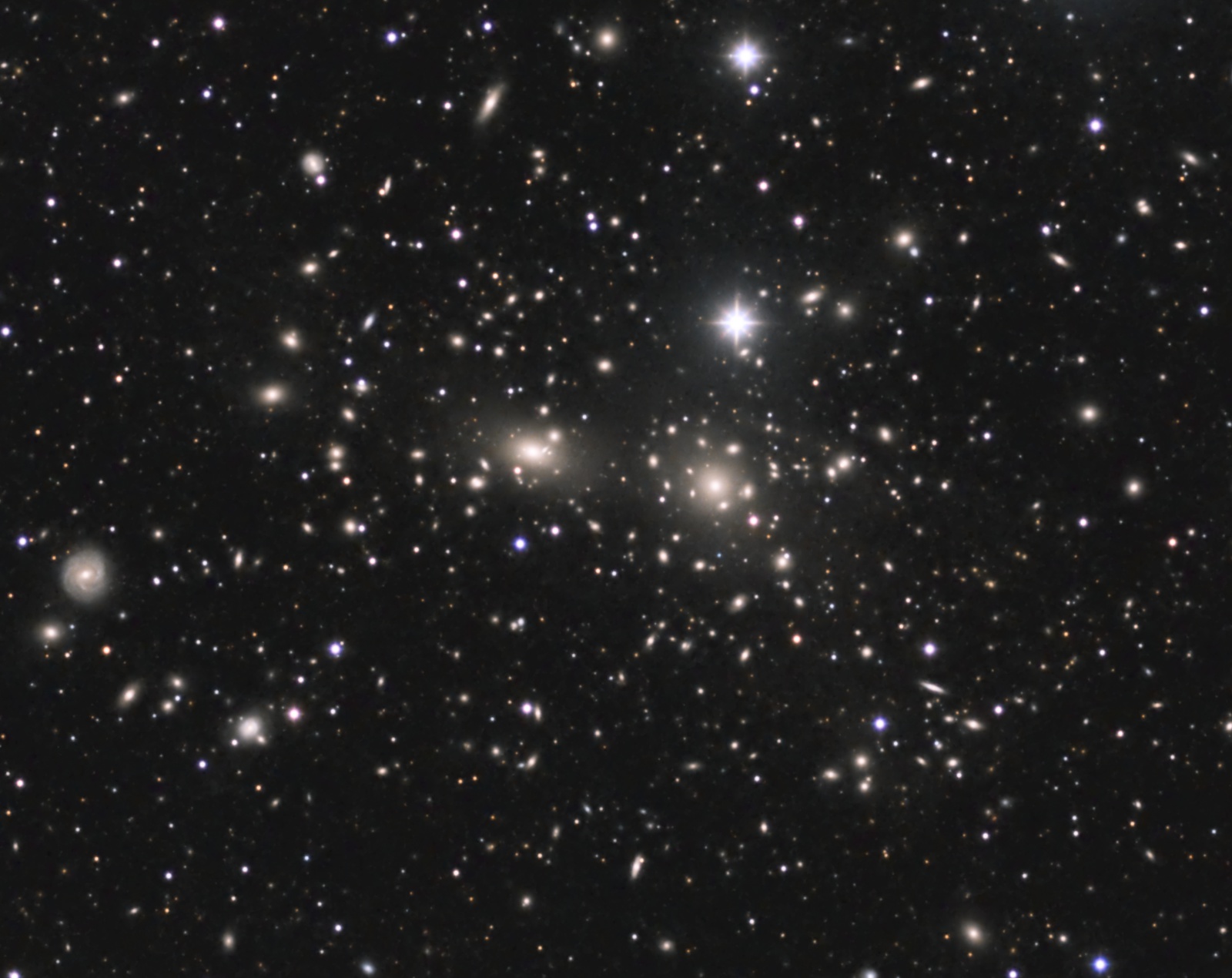 While a few of the galaxies show some spiral structure, this image is meant to be looked at as a whole photo. It is just staggering to me that all these galaxies reside in this tiny patch of sky, and each contains billions of stars. Just to put a point on that idea, have a look at the uncropped image, that reveals even more galaxies.

I’ve prepared an annotated version of the image above as well as one for the wider field. In both, NGC and IC objects are marked and labelled. The fainter and more numerous PGC galaxies are also marked, but not labelled. Look closely and you’ll see many more galaxies that aren’t in the NGC, IC or PGC catalogues, and therefore not marked in the annotated images.

Image scale is about 1.6 arcsec per pixel for this camera / telescope / combination and Drizzle integration

RGB Creation
Creation and cleanup:  The BatchPreProcessing script was used to perform calibration, cosmetic correction and registration of all frames. ImageIntegration followed by DrizzleIntegration was used to make the channel masters. The R, G and B masters were cropped to remove edge artifacts and processed separately with DBE, and then combined to make an RGB image which was processed with PhotometricColorCalibration.

Noise Reduction and Re-Stretch: TGVDenoise was applied in L*a*b* mode with 1000 iterations with a range mask used to protect high signal areas.  This was followed by a HistogramTransformation to raise the black point (but with no clipping).

Sharpening: MultiscaleLinearTransform was used to sharpen larger galaxies (layers 2 and 3; strength 0.12 for each) using a mask to protect stars and background.

Dark Mottling: To reduce dark mottling in the background, the L* channel was extracted from the SynthLRGB with ChannelExtraction. PixelMath was applied with the expression iif($T<0.07+0.5*(median($T)-$T), $T). The modified L* channel was then applied to the colour image using ChannelCombination in CIE L*a*b* mode.

Final Steps: Background, galaxy and star brightness, contrast and saturation were adjusted in several iterations using Curves with masks as required. The ColorMask script was used to make a mask that selected magenta haloes around a few stars. ColorSaturation was used with the mask to reduce these haloes.