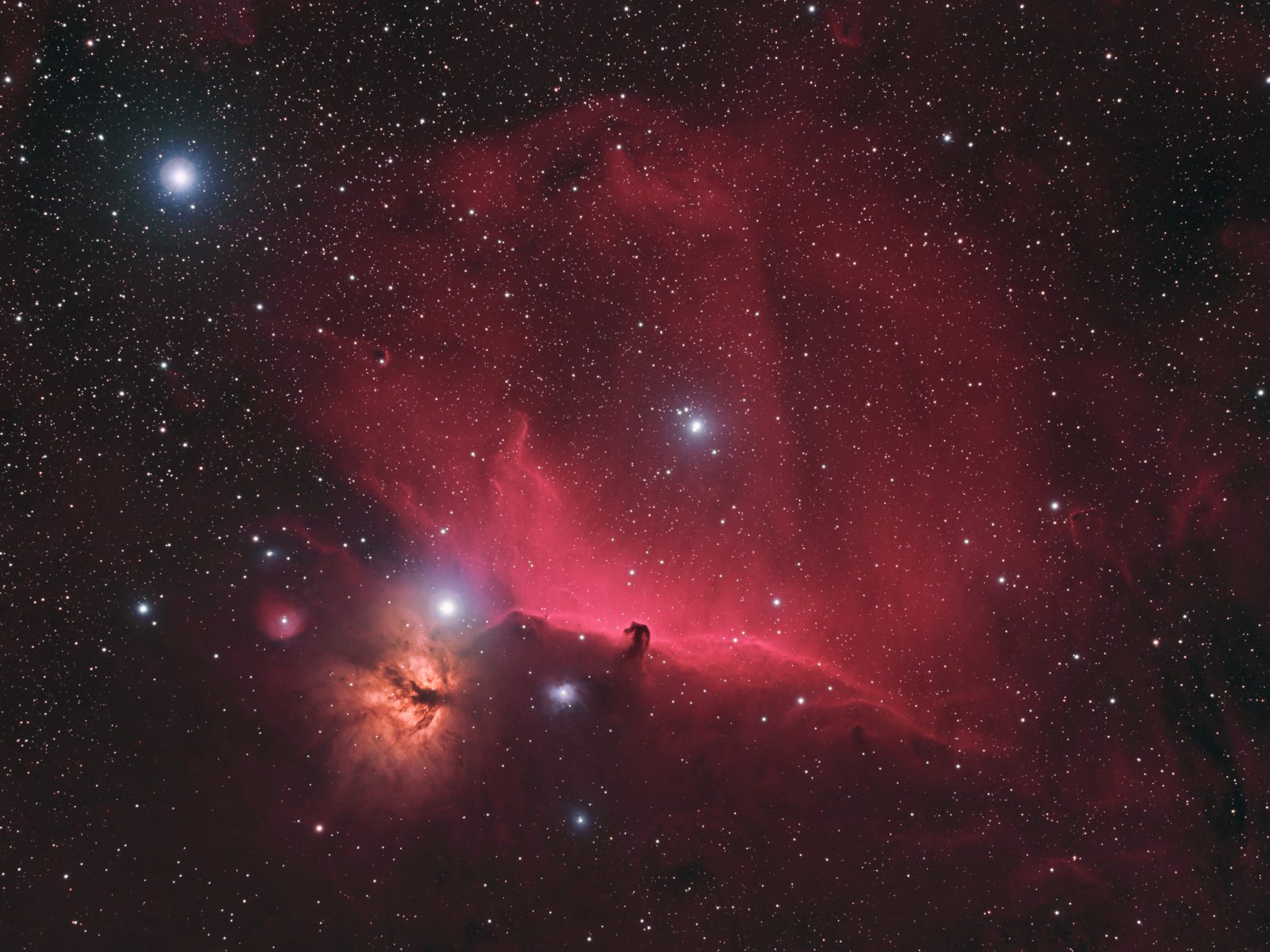 I acquired this image during November and December 2019, using a one-shot colour camera with a narrow band filter. This region is part of a larger complex of nebulosity and star formation in Orion, known as the Orion Molecular Complex. There’s a wealth of deep-sky jewels in this image.

– IC 434 is the large, round emission nebula that dominates this field. It lies about 1,400 light years away.

– The second brightest star in this image is Alnitak, the leftmost star in Orion’s belt, as seen from the northern hemisphere. It’s more than 700 light years away, and is a triple star, whose brightest member is a hot blue supergiant.

– At upper left, the brightest star in the field is Alnilam, the centre star in Orion’s belt. It is estimated to be 1,350 – 2,000 light years away, and has a mass 30-64.5 times that of the Sun. In the vicinity of Alnilam, William Herschel discovered a reflection nebula, NGC 1990, in 1786. However, more recent visual and photographic surveys have not revealed it, and it may not exist at all. Interestingly, Herschel described it as “spectacular” and “extremely large.”

– The Flame Nebula is below Alnitak, whose radiation powers this emission nebula. Electrons in the gas become energized by ultraviolet light and release the energy as visible light. The dark areas are made of dark gas and dust lying between us and the bright part of the nebula.

– To the lower left of the Horsehead Nebula is NGC 2023 (NGC is the revised New General Catalogue), a bluish reflection nebula. The pinkish areas in it are due to ultraviolet light causing molecular hydrogen to fluoresce, and the colour is quite different than the deeper red usually associated with hydrogen. Reflection nebulae do not glow with their own light, they are due to dust and gas reflecting starlight towards us.

– Near bottom centre is a small, whispy reflection nebula, IC 435 (IC stands for “Index Catalogue” and there are two IC supplements to the NGC).

The DarkStructureEnhance script was applied with a strength of 0.25. The image was rescaled to its original scale of 2.6″/pixel. ICCProfileTransformation (sRGB IEC61966-2.1; Relative Colorimetric with black point compensation) was applied prior to saving as a jpg. And if you read all the way to here, congratulations. You can see the full resolution Drizzled version (1.3″ per pixel), by sending me a comment asking for it!