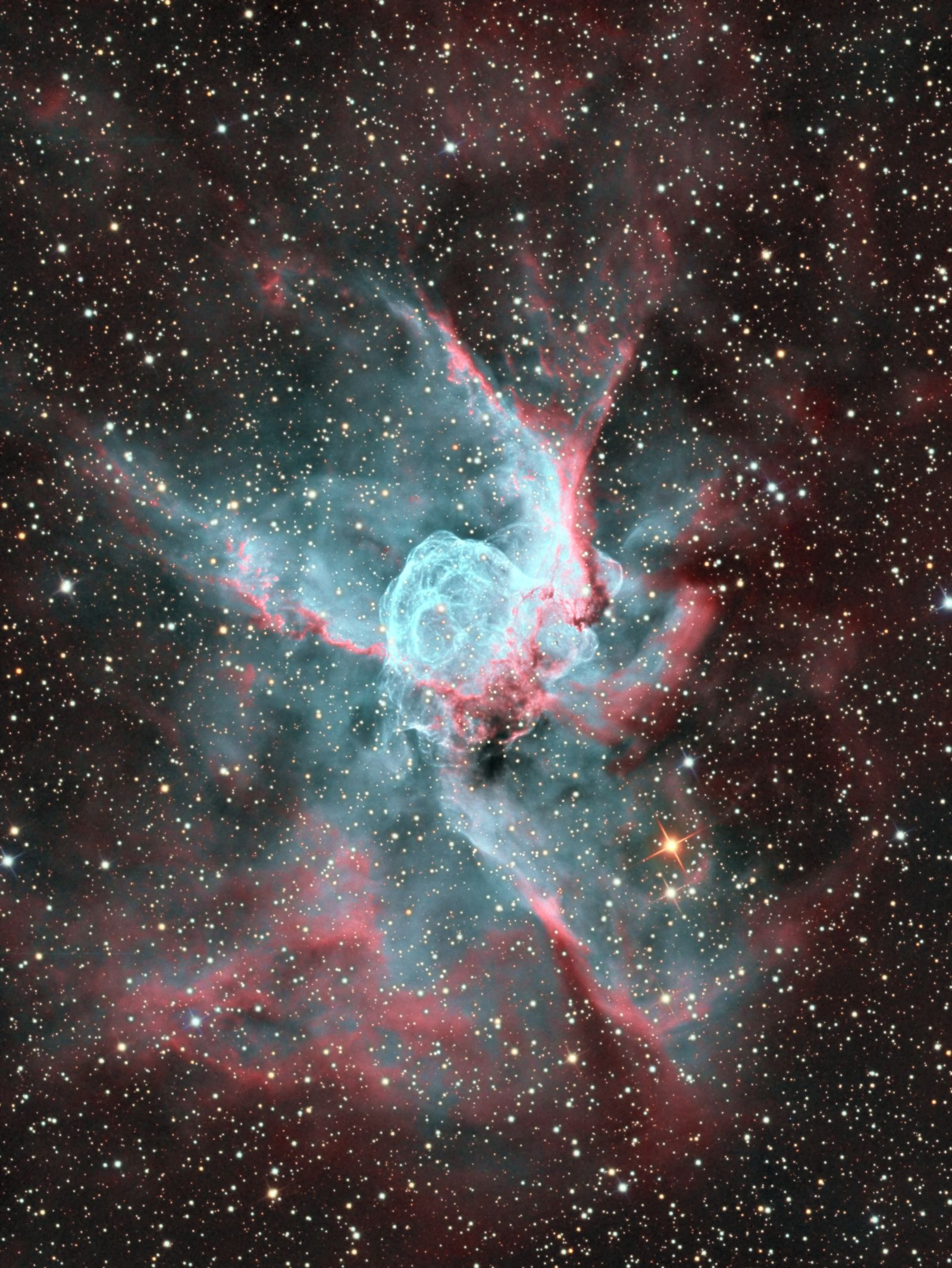 Thor’s Helmet (NGC 2539, Sh2-298, Gum 4) is an emission nebula in Canis Major. The powerful Wolf-Rayet star WR7 near the centre of the nebula is causing the gases to glow. That star is thought to be in a brief pre-supernova stage, and could explode in the cosmically-not-too-distant future. This object is thought to be similar to the Bubble Nebula, but the energy from WR7 has blown the gas in Thor’s Helmet into more complex shapes.  Thor’s Helmet also contains much more oxygen structures than the Bubble Nebula. Oxygen gives the teal-coloured structure; hydrogen provides the reds. This nebula contains hundreds of solar masses of ionized gases (the gases that are glowing), along with hundreds of thousands of solar masses of unionized material. The age of the nebula is uncertain, with estimates ranging from 78,500 to 236,000.

This data used to create this image was acquired from Yass, New South Wales, Australia by my friend, expert astrophotographer Martin Pugh. Thank you Martin!

SBIG STXL-11002 camera, Astrodon Ha, O3, R, G and B filters, Planewave 17″ CDK, Paramount ME. Equipment control with the SkyX, scripted with CCDAutopilot. All pre-processing and processing in PixInsight, except that master calibration frames were made using CCDStack. Data Acquired by Martin Pugh, from Yass, NSW, Australia.

HaO3RGB Creation
Creation and cleanup:  The WeightedBatchPreprocessing script was used to perform calibration, registration and integration of all frames. The R, G and B masters were combined to make an RGB image. The RGB, Ha and O3 images were cropped with DynamicCrop and processed with DynamicBackgroundExtraction. The RGB was processed with PhotometricColorCalibration.

Combining Ha, O3 and RGB data: The NBRGBCombination script was run using Ha for red narrowband and O3 for green and blue narrowband.

Stretching:  MaskedStretch was applied to the HaO3RGB image to make a pleasing, bright image, followed by a contrast boost with CurvesTransformation.

Lightness Processing
Immediately after creating the HaO3RGB image, RGBWorkingSpace was applied to it with all channel weights set to 1. The Lightness was extracted and processed separately as follows:

Deconvolution:  A star mask was made to use as a local deringing support image. A copy of the image was stretched to use as a range mask. Deconvolution was applied (200 iterations, regularized Richardson-Lucy, external PSF made using PSFImage script with about 25 stars).

Additional Processing
Noise Reduction and Re-Stretch: TGVDenoise was applied in CIE L*a*b* mode with a maximum of 1000 iterations with a range mask used to protect high signal areas.  This was followed by a HistogramTransformation to raise the black point (but with no clipping).

Final Steps: MultiscaleLinearTransform was used to sharpen the structures in the bright parts of the nebulae (layers 2 and 3 each at 0.2). Background, nebula and star brightness, contrast and saturation were adjusted in several iterations using Curves with masks as required. The DarkStructureEnhance script was applied (8 layers, strength of 0.4). The morphological selection mode of MorphologicalTransformation was used with a star mask to shrink stars slightly (Amount 1; Selection 0.15; other parameters at default).