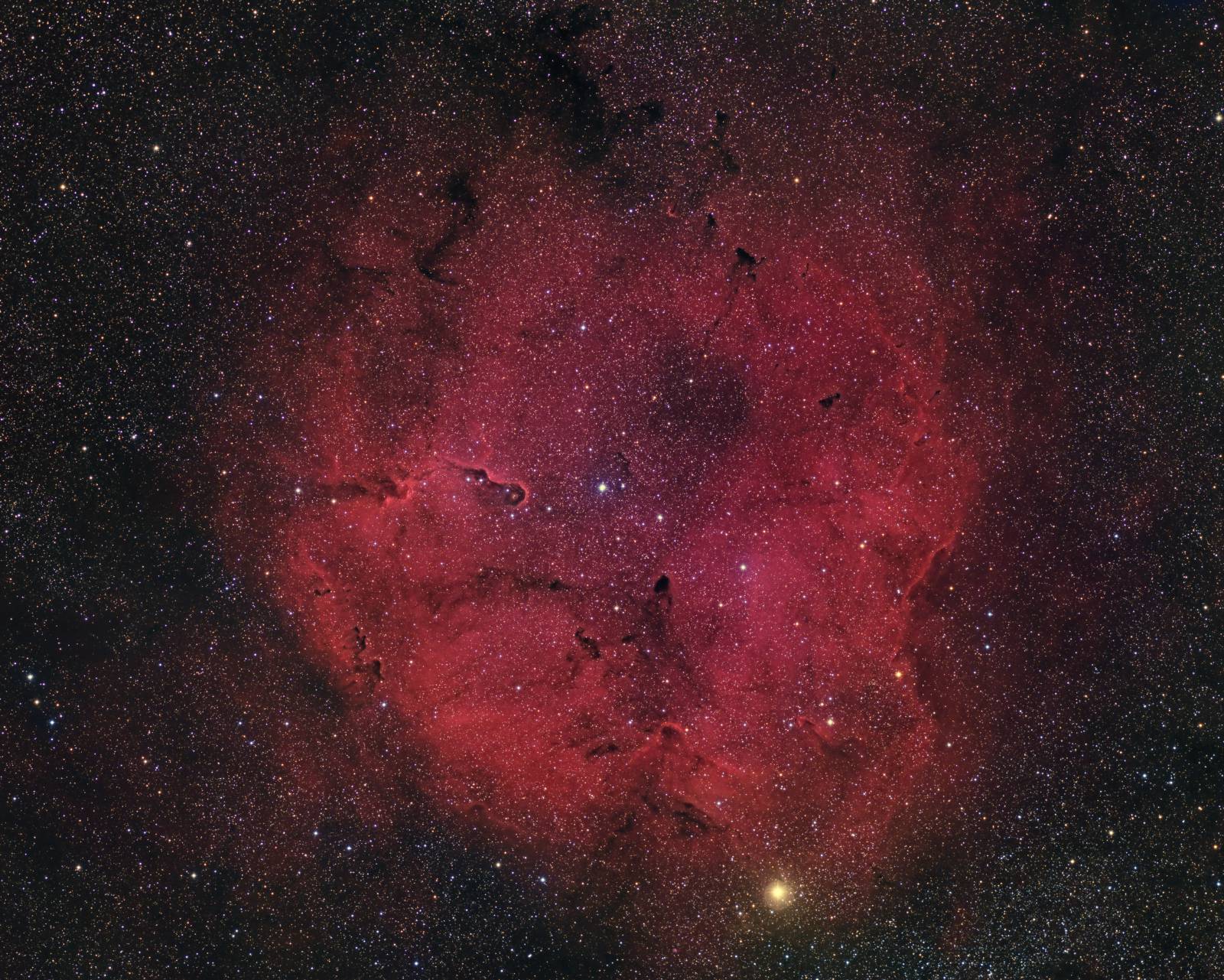 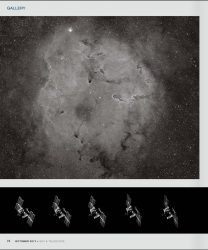 IC 1396 is a large cloud of faintly glowing gas, composed mainly of hydrogen. It is a huge object in the sky, with a diameter more than six times that of the Moon. That’s because it is both relatively close to us (2,400 light years) and big (more than 100 light years across). The energy that makes the nebula’s gas glow comes from the bright star at the centre of the nebula, called HD 206267. Jutting in from the 9 o’clock position is the well known Elephant’s Trunk Nebula, which features in another image I’ve taken of this object. The Elephant’s Trunk is a star forming region, and there are a number of very young stars — less than 100,000 years old — in its vicinity.  IC 1396 is textured throughout with many dark nebula. It’s hard not to notice Mu Cephei, the brightest star in the image. It is about 38,000 times as bright as the Sun. Bring your sunscreen.

Many people prefer these nebulae displayed in greyscale (black & white) images. I usually prepare both. You can find the greyscale image here.

NB-RGB Creation
Creation and cleanup:  The BatchPreProcessing script was used to perform calibration, cosmetic correction and registration of all frames. DrizzleIntegration was used to make the channel masters. The R, G, B and Ha masters were cropped to remove edge artifacts. R, G and B were combined to make an RGB image which was processed with DBE, BackgroundNeutralization and ColorCalibration.

Stretching:  HistogramTransformation was applied to the NBRGB image to make a pleasing, bright image.

Deconvolution:  A star mask was made to use as a local deringing support image. A copy of the image was stretched to use as a range mask. Deconvolution was applied (80 iterations, regularized Richardson-Lucy, external PSF made using DynamicPSF tool with about 30 stars).

Noise Reduction and Re-Stretch: SCNR was applied (average neutral, 0.5). TGVDenoise was applied in Lab mode with 300 iterations with a range mask used to protect high signal areas.  This was followed by a HistogramTransformation to raise the black point (but with no clipping).

Contrast Enhancement:  The contrast was boosted with 2 passes of LocalHistogramEqualization with max contrast of 1.5 for both passes (scale 50, strength 0.5 and scale 150, strength 0.15) using a mask to protect background and stars.

Final Steps: MultiscaleLinearTransform was used to sharpen the structures in the bright parts of the nebula (layers 2-4 at 0.05). Background, nebula and star brightness, contrast and saturation were adjusted in several iterations using Curves with masks as required. . The DarkStructureEnhance script was applied (8 layers, strength 0.15) to a copy of the image, which was blended back to the “flatter” parts of the image to accentuate dark features in the nebulae.  The ColorMask script was used to make a blue/purple star halo mask. This mask was used with the Curve hue tool to correct bluish-purple haloes around medium sized stars.