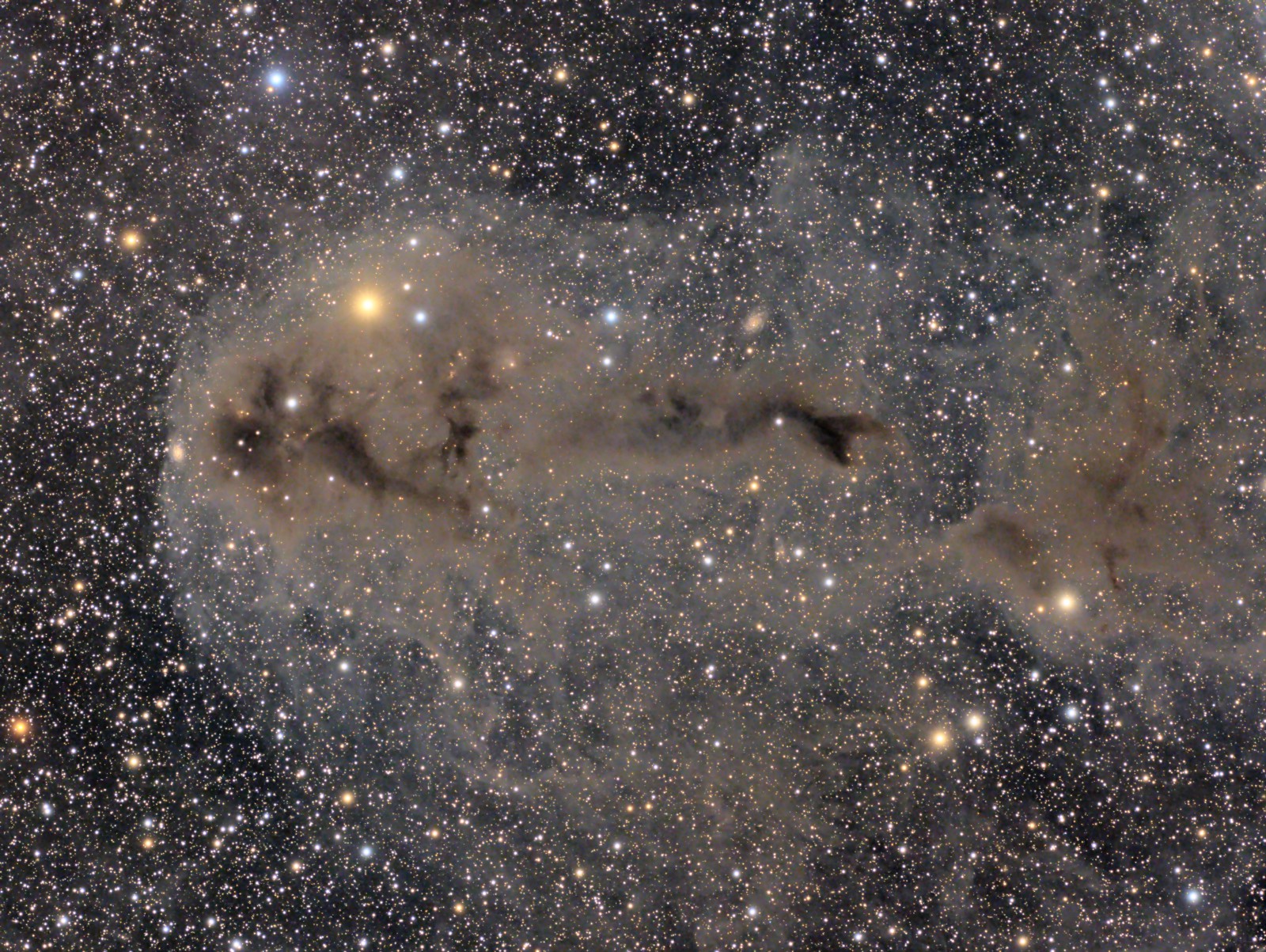 LDN 1251 is a complex nebula in the constellation Cepheus, containing dark structures and faintly glowing / reflecting dust and gas. It’s nickname is the Rotten Fish Nebula. The acronym “LDN” refers to Lynd’s Catalogue of Dark Nebulae. This catalogue’s entries were identified by inspection of red and blue images from the National Geographic – Palomar Observatory Sky Atlas.

This type of object is sometimes referred to as a molecular cloud. LDN 1251 is quite close to us, at around 1,000 light years.  It is part of a much large complex of bright and dark nebulae in this region of the sky. There are also galaxies far in the background. Near the left edge of the nebula is PGC69472, a spiral galaxy that reminds me a bit of M33.  Another spiral galaxy, PGC166755, is at upper right of centre in this image.  Numerous Herbig-Haro objects are associated with LDN 1251, and are visible as small patches of nebulosity associated with newly born stars.

I prepared an annotated image that identifies many of the objects in the image.

Data Reduction and Initial Processing
Preprocessing: The WeightedBatchPreProcessing script was used to create a Luminance master frame from the mono camera and an RGB master frame from the one-shot colour camera. DrizzleIntegration (1x CFA Drizzle) was applied to the RGB set. The RGB master was registered to the Luminance master using StarAlignment.

Deconvolution:  A star mask was made from the Luminance master to use as a Local Deringing Support Image. The GAME script was used to make a mask selecting only two galaxies and one other region for deconvolution. Deconvolution was applied (30 iterations, regularized Richardson-Lucy, ParametricPSF mode with default settings; Global dark deringing = 0.03; Global bright deringing 0.005).

Nonlinear Noise Reduction: TGVDenoise was used in L*a*b* mode to reduce noise with a mask used to target the background areas and protect the stars and galaxy (max. 1,000 iterations and convergence selected for both lightness and chrominance).

Contrast Enhancement: LocalHistogramEqualization was applied using an inverted star mask to protect the stars, with a scale of 200 (max contrast 1.5, strength 0.2, 1 iteration).

Sharpening: MultiscaleLinearTransform was used to sharpen Layers 2 and 3 with strengths of 0.02and 0.02, respectively. The mask used for deconvolution was used to limit sharpening to a few specific regions of the image.