Skip to content
Previous Next
The Cave Nebula – Hubble Palette 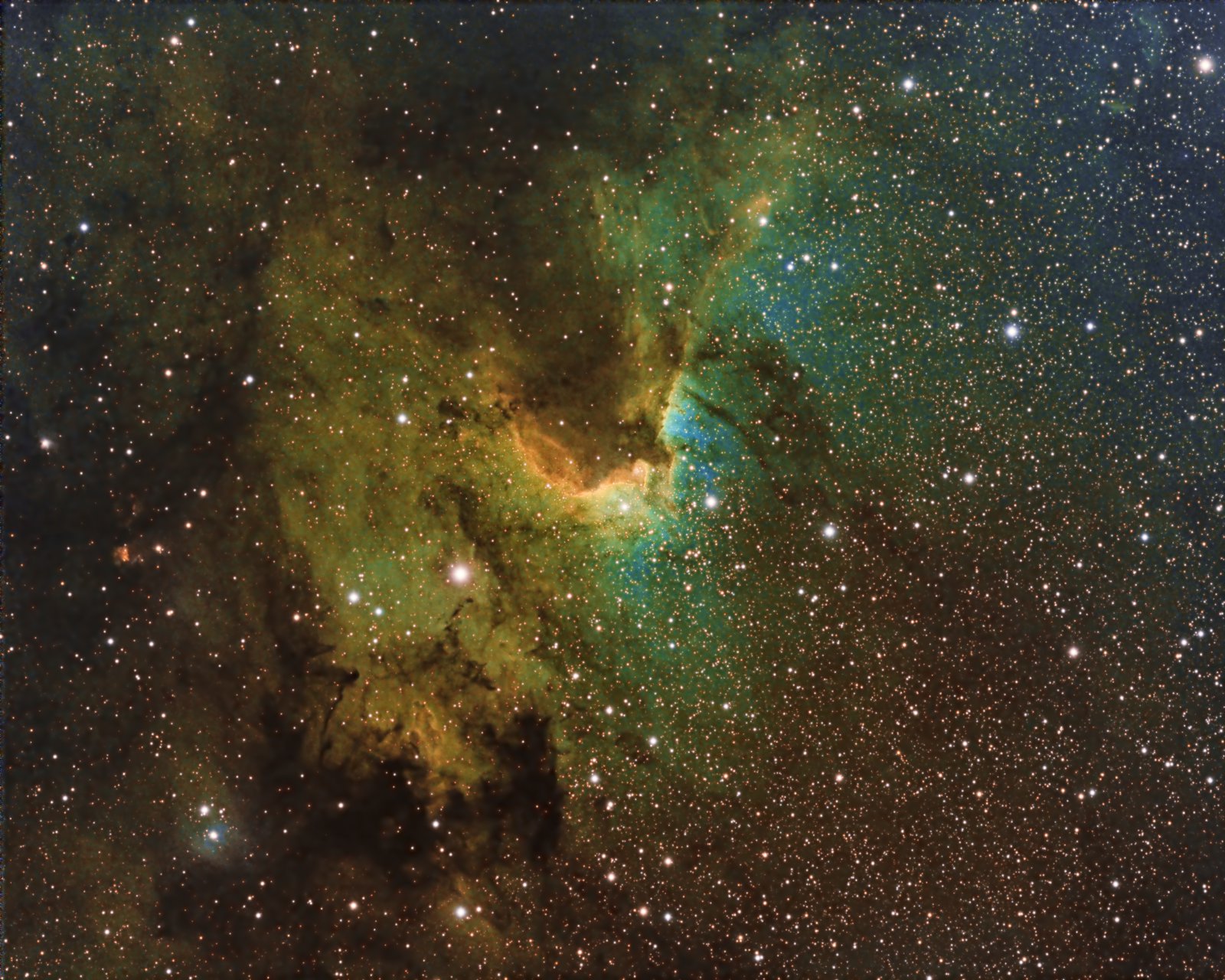 The Cave Nebula lies in the constellation Cepheus about 2,400 light years away, pretty close in cosmic terms.  The “cave” has a bright rim ionized by the hot blue-white stars in the vicinity. The main “cave” structure is 10 light years across and is catalogued as Sharpless 155 (Sh2-155) and also as Caldwell 9 (the Caldwell catalogue was compiled by Sir Patrick Moore, and named for his mother’s maiden name). Near the lower left corner of the image is a blue reflection nebula, vdB 155. The Cave Nebula region makes a nice natural colour image, highlighting red emission nebula, blue reflection nebulae, dark nebulae and many colourful stars. I’ve also imaged the Cave Nebula before at higher resolution; that image was published in the April 2016 issue of Sky and Telescope.

Deconvolution:  A star mask was made to use as a Local Deringing Support image. A copy of the  luminance image was stretched to use as a range mask. Deconvolution was applied (80 iterations, regularized Richardson-Lucy, external PSF made using PSFImage script with 50 stars).

Sharpening: MultiscaleLinearTransform was used to sharpen Layers 2 and 3 with strengths of 0.27 and 0.1, respectively. A mask was used to limit sharpening to high-signal areas and to protect the stars and background regions.

Hue Adjustment: The green tones were transformed towards blue, and yellows towards red, using the CurvesTransformation Hue control. SCNR was applied with a strength of 0.20 through a Green mask generated with the ColorMask script.

Final Steps: MorphologicalTransformation was applied (morphological selection=0.11; strength =0.5; 3×3 kernel) through a star mask to slightly reduce the stars. Background, nebula and star brightness, contrast, saturation and hue were adjusted in several iterations using CurvesTransformation with masks as required. The DarkStructureEnhance script was applied with a strength of 0.15. ICCProfileTransformation (sRGB IEC61966-2.1; Relative Colorimetric with black point compensation) was applied prior to saving as a jpg.