Skip to content
Previous Next
The Cave Nebula Region 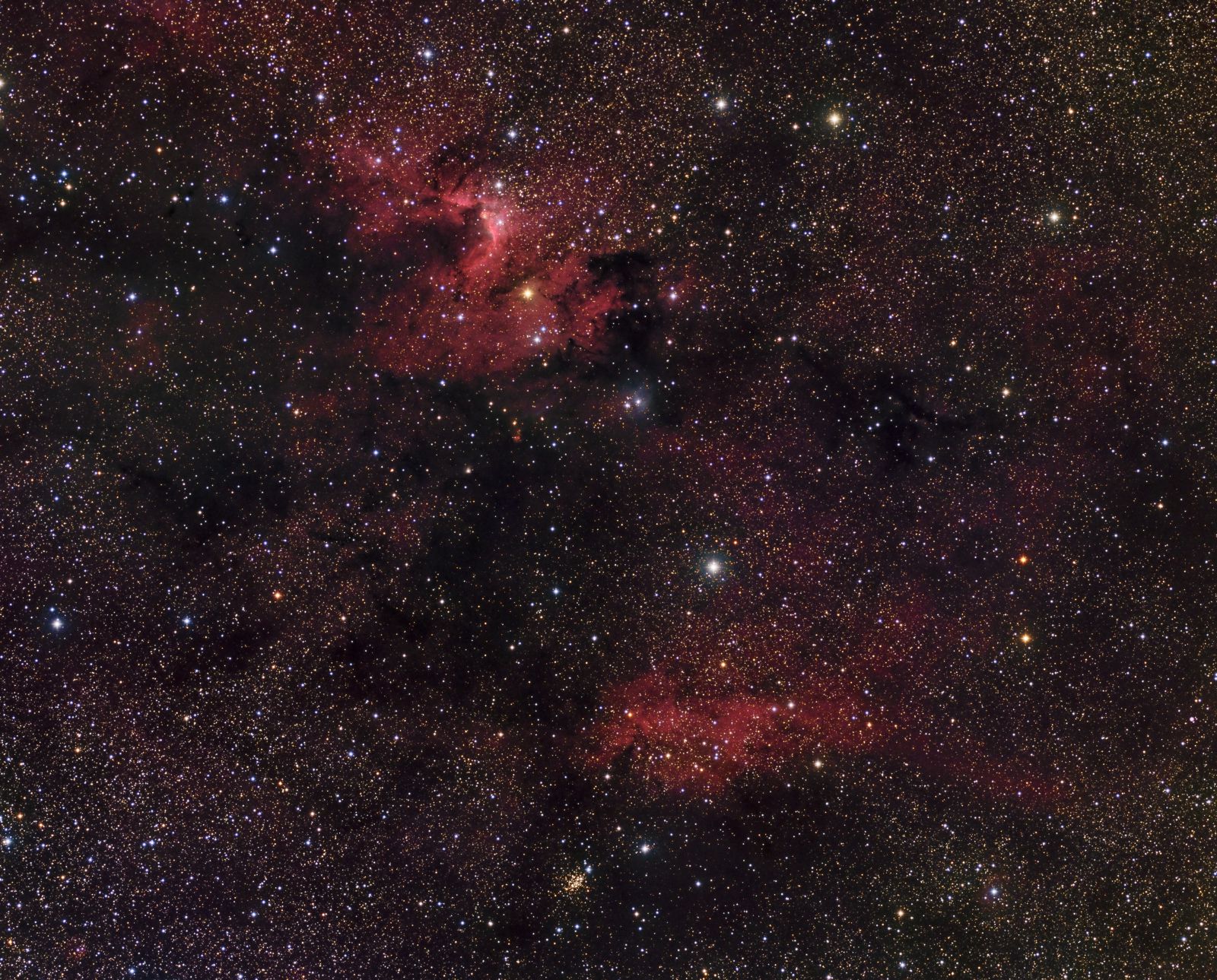 The Cave Nebula region makes a pretty picture with red emission nebula, blue reflection nebulae, dark nebulae and many colourful stars.  This region lies in the constellation Cepheus about 2,400 light years away, pretty close in cosmic terms.  The Cave Nebula’s bright rim is ionized by the hot blue-white stars in the vicinity, primarily the bright star left of centre in this image. The main “cave” structure is 10 light years across.  It is catalogued as Sharpless 155 (Sh2-155) and also as Caldwell 9 (the Caldwell catalogue was compiled by Sir Patrick Moore, and named for his mother’s maiden name). Near the centre of the image is a blue reflection nebula, vdB 155, and the pretty, golden open cluster NGC7419 is at bottom centre, Sh2-154 is the large, diffuse red object in the lower part of the image. I’ve imaged the Cave Nebula before at higher resolution (but in a much narrower field). That image was published in the April 2016 issue of Sky and Telescope.

NB-RGB Creation:
Creation and cleanup:  The BatchPreProcessing script was used to perform calibration, cosmetic correction and registration of all frames. LocalNormalization was applied, and ImageIntegration and DrizzleIntegration were used to make the Ha, R, G and B masters using Local Normalization for scaling. The masters were cropped to remove edge artifacts. R, G and B were combined to make an RGB image which was processed with DBE, BackgroundNeutralization and PhotometricColorCalibration.

Stretching:  HistogramTransformation was applied to the NB-RGB image to make a pleasing, bright image. Curve was applied to boost contrast and saturation.

Additional Processing:
Final Steps: MultiscaleLinearTransform was used to sharpen the structures in the bright parts of the nebulae (layers 2-3 at 0.1). MorphologicalTransformation was used in selection mode (Selection 0.13, strength 0.6) to slightly reduce stars The DarkStructureEnhance script was used (8 layers, strength 0.2) to increase contrast between dark nebula and brighter regions. Background, nebula and star brightness, contrast and saturation were adjusted in several iterations using Curves with masks as required.  The image was downsampled by a factor of two using IntegerResample to restore the original resolution.