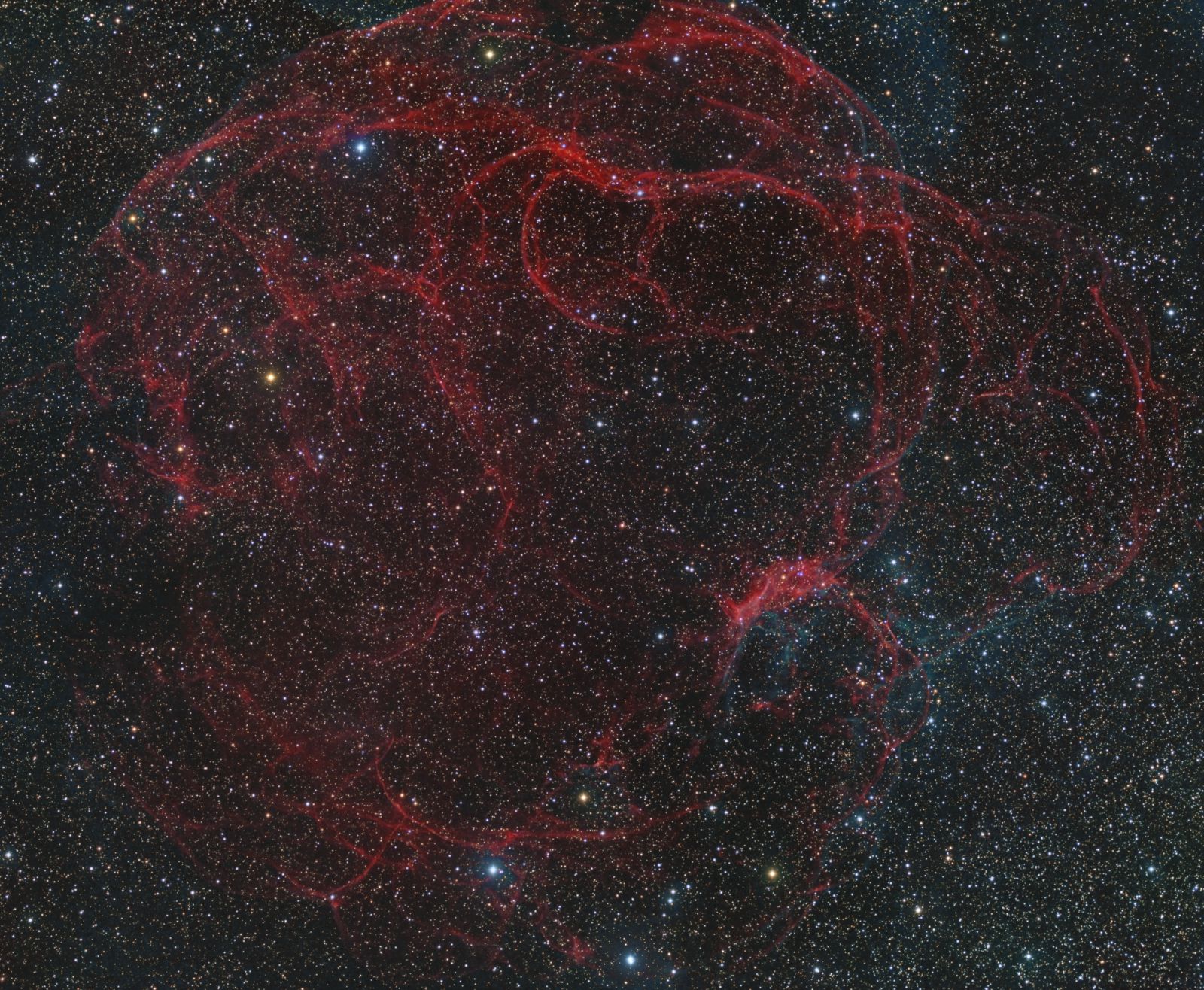 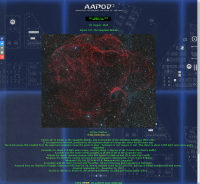 Simeis 147 is known as the Spaghetti Nebula, and is a member of the Sharpless Catalogue (Sh2-240). It is a supernova remnant, produced by the explosive death of a large star about 40,000 years ago. The shock waves that resulted from the supernova explosion cause the gases to glow – hydrogen in red; oxygen in teal. This object is about 3,000 light years away and is expanding. Currently it is about 150 light years across, covering about 3 degrees of sky (6 times the Moon’s width). A pulsar near the centre of this complex is all that is left of the progenitor star. Pulsars are rapidly spinning neutron stars that appear to blink on and off as seen from earth.

While images of this object usually show the red structures caused by the glow of ionized hydrogen, I haven’t seen any that capture so much of the teal-coloured emissions of oxygen. The diffuse areas of O3 just right and left of top centre could be artifacts or real structures. A couple of other images I’ve seen appear to show these regions, but most do not. If you image this area, go deep on the O3 and let me know what you find.

Moravian G3-16200 EC camera (on loan from O’Telescope), Optolong Ha, O3, R, G and B filters, Takahashi FSQ-106 ED IV at f/3.6, Paramount MX, unguided. Acquisition with the SkyX, focused with FocusMax. All pre-processing and processing in PixInsight. Acquired from my SkyShed in Guelph. Gibbous to full moon for Ha, new to crescent moon for O3 and RGB. Average or better transparency and seeing. Acquired September 21 – November 21, 2017.

Combining Ha, O3 and RGB data: The NBRGBCombination script was run using RGB image for broadband, Ha for red narrowband and O3 for green and blue narrowband. PhotometricColorCalibration was applied.

Final Steps: MultiscaleLinearTransform was used to sharpen the structures in the bright parts of the nebula (layers 2-3 at 0.05). Background, nebula and star brightness, contrast and saturation were adjusted in several iterations using Curves with masks as required. MorpohologicalTransformation was used in Morphological Selection mode (structure 3×3, selection 0.17, strength 0.3) to slightly reduce the medium sized stars. The image was downsampled by a factor of 2 to the original camera resolution to keep file size manageable for web display.