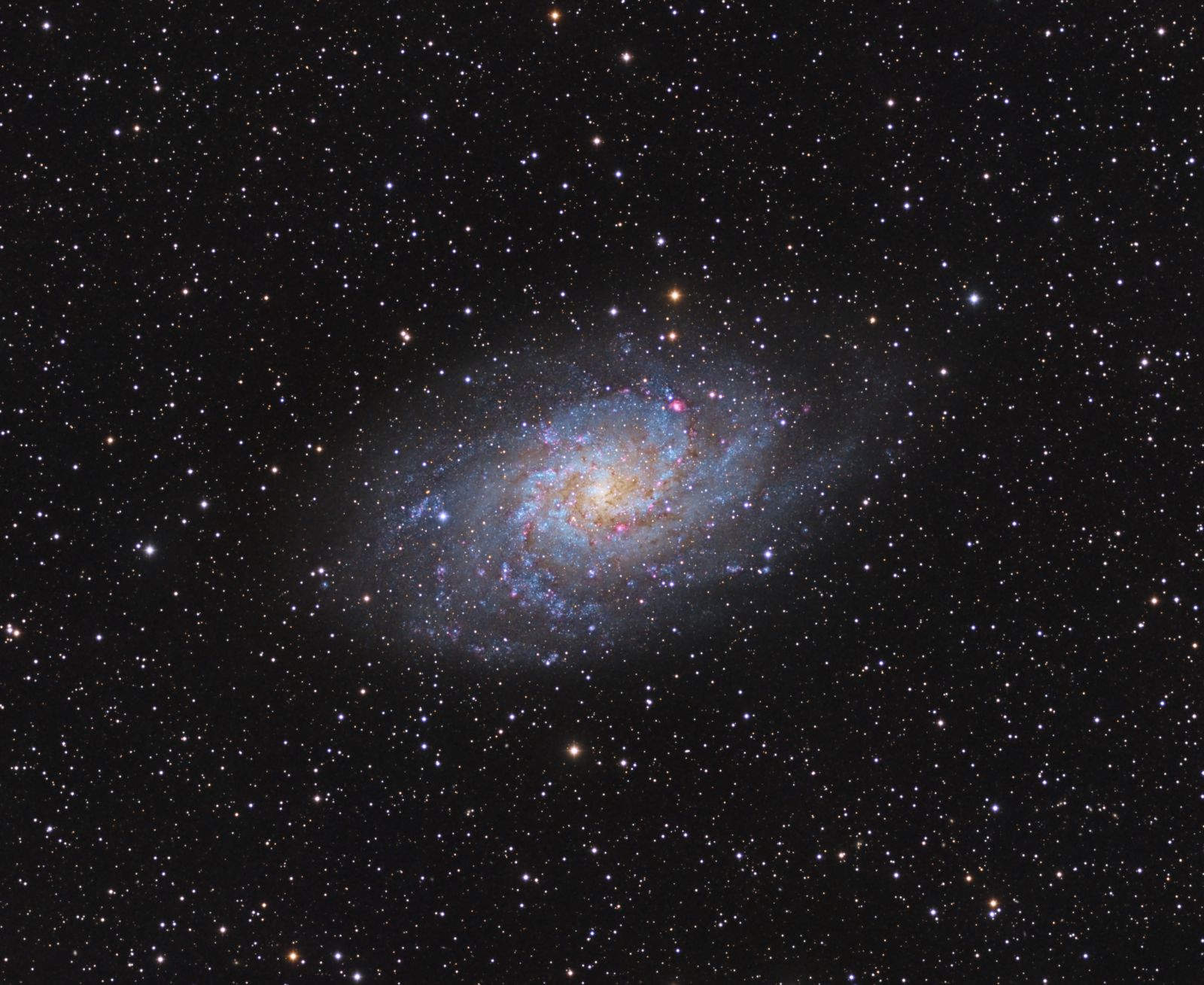 Moravian G3-16200 EC camera (on loan from O’Telescope), Optolong Ha, R, G and B filters, Takahashi FSQ-106 ED IV at f/3.6, Paramount MX, unguided. Acquisition with the SkyX, focused with FocusMax, scripted with CCD Commander. All pre-processing and processing in PixInsight. Acquired from my SkyShed in Guelph. Moderate moonlight for Ha, no moonlight for RGB, average transparency and seeing.

HaRGB Creation:
Creation and cleanup:  The BatchPreProcessing script was used to perform calibration, cosmetic correction and registration of all frames. ImageIntegration and DrizzleIntegration were used to make the Ha, R, G and B masters. The masters were cropped and processed with DBE. ChannelCombination was used to make RGB image which BackgroundNeutralization and ColorCalibration.

Combining Ha and RGB data: The NBRGBCombination script was run with default settings using Ha for red A stretched and blurred copy of the Ha master was used as a mask to blend the resulting image into the RGB image. using PixelMath.

Stretching:  ArcSinhStretch was used to begin the stretch, until just the core of M33 was visible, with the goal of helping to preserve star colours. HistogramTransformation was applied to the HaRGB image to make a pleasing, bright image.

Local Contrast Adjustment: The LocalFuzzyHistogramHyperbolization script was applied in Linear mode using the low end of the range of recommended settings and 10×10 scale.  The result was blended with the original 50:50. Bright areas of the galaxy were processed HDRMultiscaleTransformation (6 layers, max contrast 1.5, strength 0.3) followed by LocalHistrogramEqualization (max contrast 1.5, scale 64, strength 0.65) using a mask for both processes to protect background and stars.

Additional Processing:
Final Steps: MultiscaleLinearTransform was used to sharpen the structures in the bright parts of the galaxy (layers 2-3 at 0.03). Background, galaxy and star brightness, contrast and saturation were adjusted in several iterations using Curves with masks as required.  The result was blended 50:50 with the HaRGB as it was immediately prior to LRGBCombination. Image was rescaled to the original capture resolution