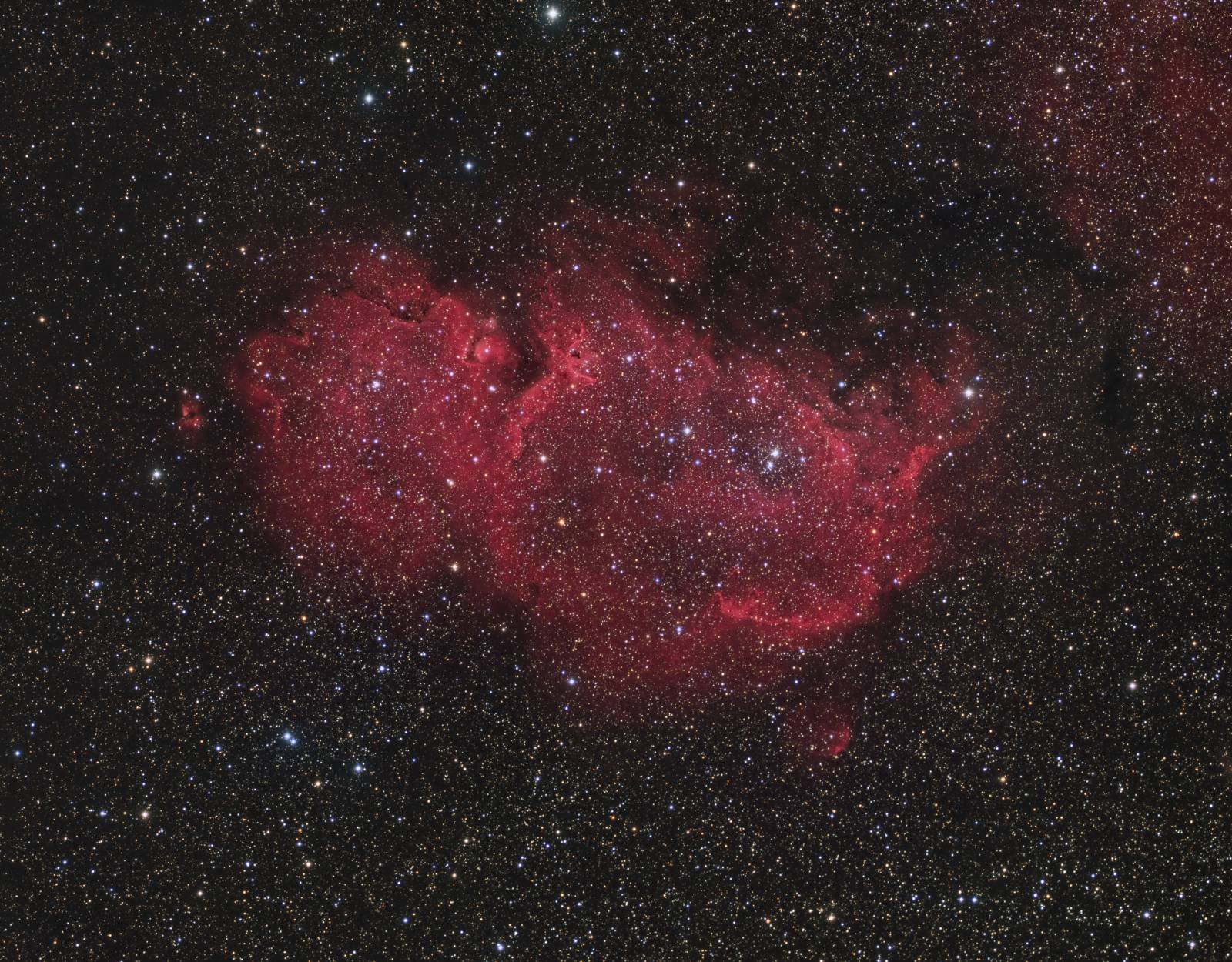 This beautiful cloud of glowing hydrogen gas is the Soul Nebula, catalogued as Sh2-199 and LBN667.  The nebula looks like a baby (and it is also known as the Baby Nebula), especially when presented as it is here.  Others see a footprint (maybe we should call it the Sole Nebula?).  It lies about 7,500 light years away in Cassiopeia.

In addition to the big nebula that dominates this image, this region is home to numerous open clusters.  IC1848 is right of centre, dominated by a pair of bright whitish stars.  The “head” contains several clusters from the Collinder Catalogue of Open Star Clusters (CR32, 632 and 634).

Scientifically, the Soul Nebula is a significant object:  it provided important evidence for the “triggered star formation theory”.  This theory says that older bright stars near the centre push gas atoms outwards and towards each other, causing new stars to form.  Analysis of images of the Soul has shown that its oldest stars are near the centre of the nebula, with age decreasing as distance from the centre increases. 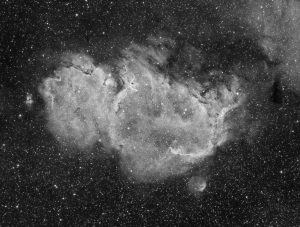 I prepared a black and white version that uses only H-alpha (deep red) data. It shows more subtle brightness differences and smaller stars. Click on the thumbnail to see it full size.

NB-RGB Creation:
Creation and cleanup:  The BatchPreProcessing script was used to perform calibration, cosmetic correction and registration of all frames. ImageIntegration and DrizzleIntegration were used to make the Ha, R, G and B masters. The masters were cropped to remove edge artifacts. R, G and B were combined to make an RGB image which was processed with DBE, BackgroundNeutralization and ColorCalibration.

Combining Ha and RGB data: The NBRGBCombination script was run with default settings using Ha for red narrowband. PhotometricColorCalibration was applied. The result was run the script a second time, using Ha for blue narrowband with a scale of 0.01. The two script results were blended 50:50

Additional Processing:
Final Steps: MultiscaleLinearTransform was used to sharpen the structures in the bright parts of the nebulae (layers 2-3 at 0.1). MorphologicalTransformation was used in selection mode (Selectdion 0.15, strength 0.5) to slightly reduce stars The DarkStructureEnhance script was used (8 layers, strength 0.2) to increase contrast between dark nebula and brighter regions. Background, nebula and star brightness, contrast and saturation were adjusted in several iterations using Curves with masks as required.

Image scale is about 1.6 arcsec per pixel for this camera/telescope combination using Drizzle for integration.