Skip to content
Previous Next
Flying Bat and Squid Nebulae 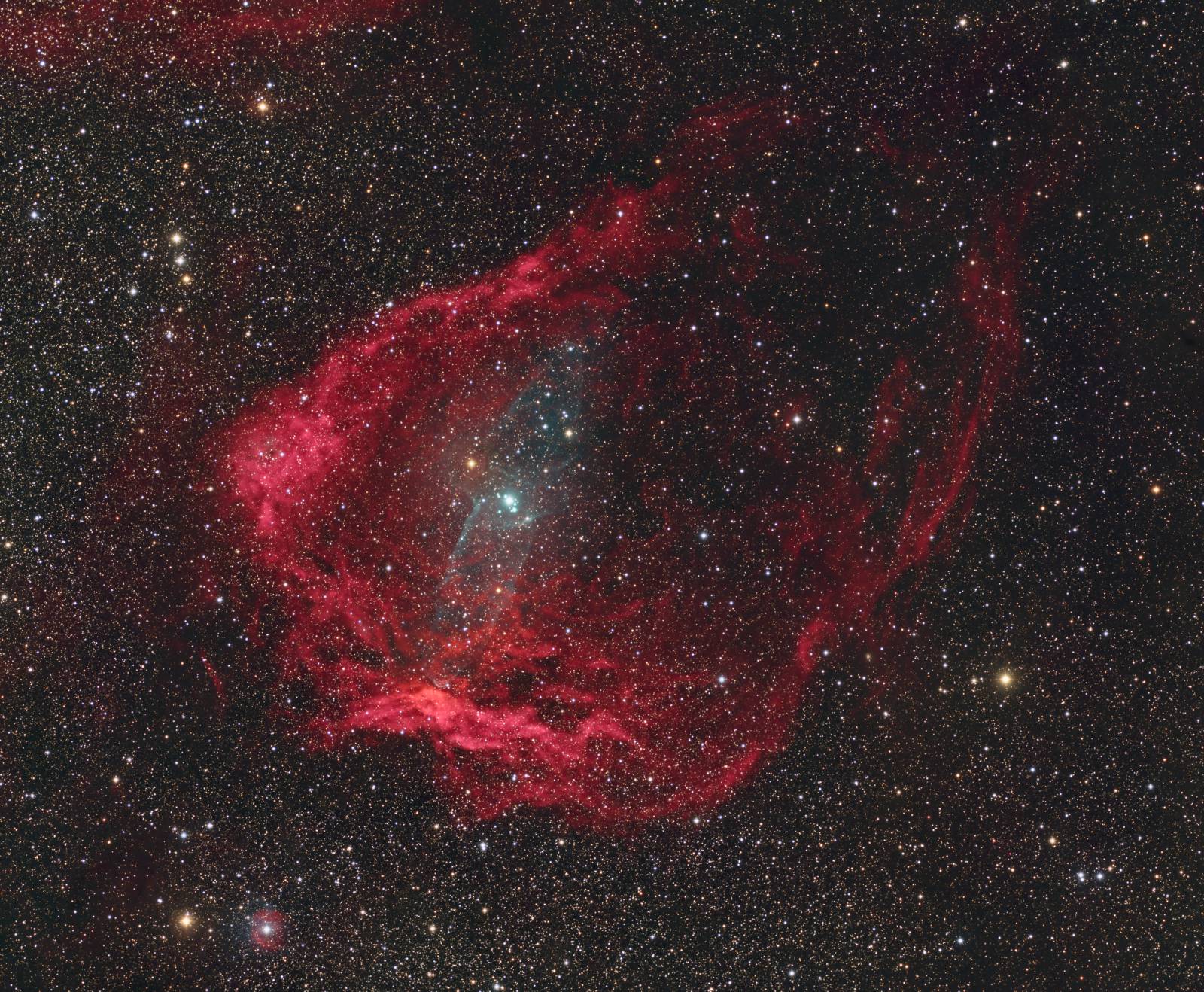 This image shows the Flying Bat Nebula (Sh2-129) and the Squid Nebula (Ou 4). The Squid is a recent discovery, being first observed in 2011 by French astronomer Nicolas Outters. The Squid is thought to lie within Sh2-129 about 2,300 light years away, which makes the Squid about 50 light years in length. The combined emission and reflection nebula near bottom left is LBN 446.

The colours of emission nebulae are due to the gas they are made of being excited by energy from a star. Red comes mainly from hydrogen atoms. The teal colour of the Squid comes from atoms of oxygen.  Both are excited by the bright star (actually a triple star system) near the centre of the Squid.

This is my longest exposure to date, with 104 hr acquired over 3.5 months. This was necessary to bring out the extremely faint Squid from my less than perfect skies.

Moravian G3-16200 EC camera (on loan from O’Telescope), Optolong Ha, O3, R, G and B filters, Takahashi FSQ-106 ED IV at f/3.6, Paramount MX, unguided. Acquisition with the SkyX, focused with FocusMax. All pre-processing and processing in PixInsight. Acquired from my SkyShed in Guelph. Gibbous to full moon for Ha, new to crescent moon for O3 and RGB. Average or better transparency and poor to above average seeing. Acquired July 3 – October 15, 2017.

HaRGB1 and HaRGB2 were blended 60:40 to give a natural colour to the red emission nebulae. The portion of the HaO3RGB image containing the Squid nebula was blended in to the HaRGB using a mask to protect all other regions of the image. PhotometricColorCalibration was applied.

Additional Processing
Contrast Enhancement: HDRMultiscaleTransform was applied to a copy of the image in Median mode (6 iterations) using a mask to protect stars and background. LocalHistogramEqualization was applied twice to the same regions to restore contrast (scales of 50 and 150, maximum contrast of 1.5, strength 0.25).

Final Steps: MultiscaleLinearTransform was used to sharpen the structures in the bright parts of the nebulae (layers 2-3 at 0.05). Background, nebula and star brightness, contrast and saturation were adjusted in several iterations using Curves with masks as required. MorpohologicalTransformation was used in Morphological Selection mode (structure 3×3, selection 0.17, strength 0.3) to slightly reduce the medium sized stars. The image was downsampled by a factor of 2 to the original camera resolution to keep file size manageable for web display.