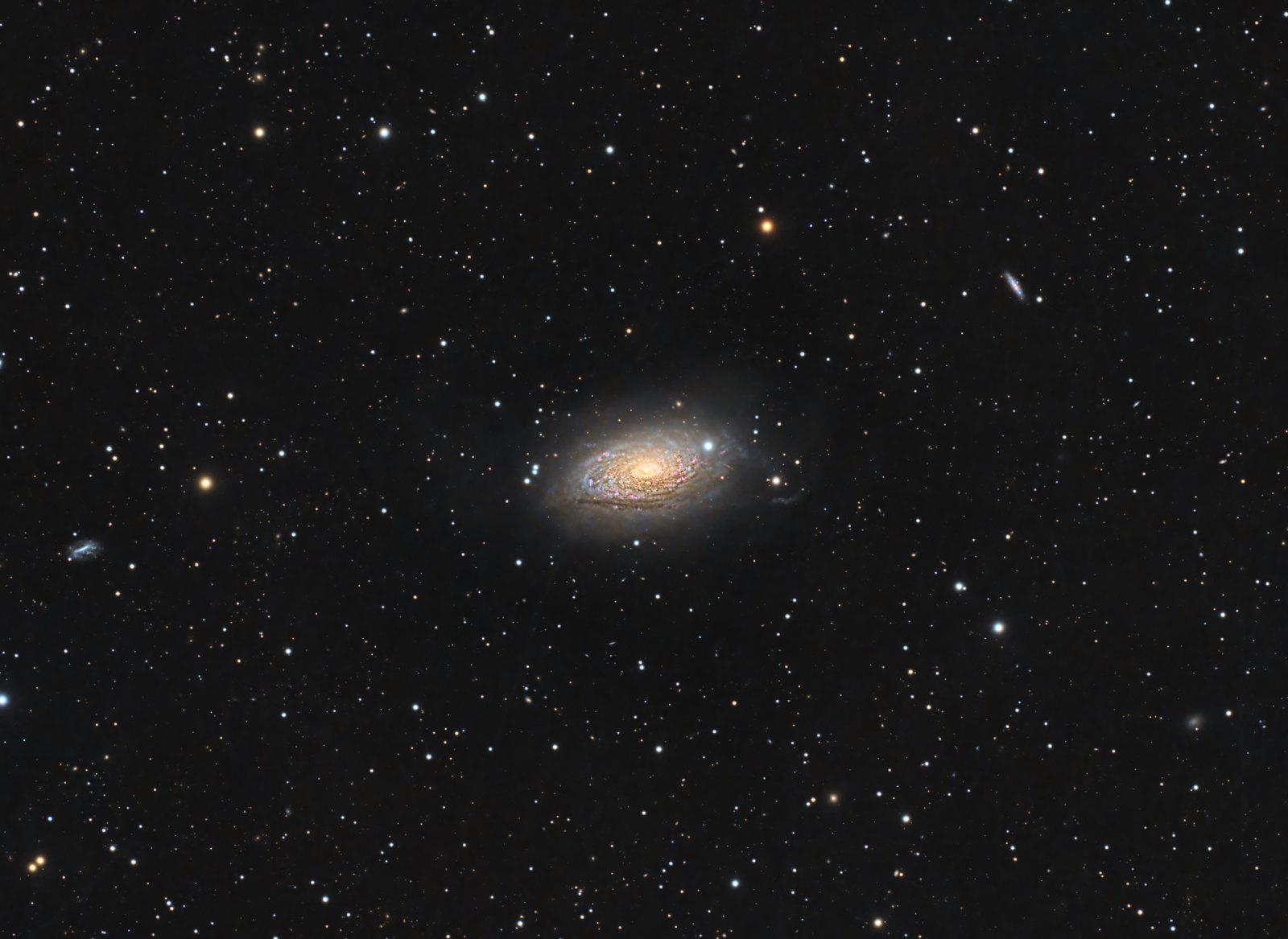 Looking at the mottling in the spirals of this galaxy it’s easy to see why it’s known as the Sunflower Galaxy (also known as M63 – the 63rd entry in the Messier catalogue).  There are a lot of red emission nebulae in this galaxy; these are structures similar to our own galaxy’s Orion Nebula. In spite of its vast distance (37 million light years), it covers more than 1/3 of the moons width — speaking to its immense size.  I prepared an annotated image that shows the location of dozens of other galaxies.

Tekkies:
Acquisition, focusing, and control of Paramount MX mount with N.I.N.A., TheSkyX and PHD2. Focus with Optec DirectSync motors and controller. Equipment control with PrimaLuce Labs Eagle 4 Pro computer. All pre-processing and processing in PixInsight. Acquired from my SkyShed in Guelph. Average transparency and seeing. Acquired January 29-May 11, 2022, mostly under a moon-free sky. 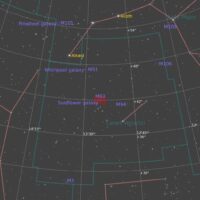 DrizzleIntegration was applied to the OSC frames, and the result was aligned to the Luminance master with StarAlignment. This yielded aligned Ha, Lum and Colour masters.

DynamicBackgroundExtraction was applied to the luminance and OSC masters (not required for Ha).

ColorCalibration was used to calibrate the OSC master..

Linear Noise Reduction: NoiseXterminator was used to reduce noise in the background areas of each image with settings Amount=0.9 and Detail=0.25

H-alpha Blending: The NBRGBCombination script was used to blend Ha with the RGB with default settings. Colour calibration was performed after this additions

Luminance
Deconvolution:  A star mask was made from the Luminance master to use as a Local Deringing Support Image. A stretched clone of the H-alpha image was used to make a mask selecting bright regions of the nebula for deconvolution. Deconvolution was applied (30 iterations, regularized Richardson-Lucy, ParametricPSF mode with default settings; Global dark deringing = 0.02; Global bright deringing 0.007).

Combining Luminance and Color Images
Luminance addition: LRGBCombination was applied to replace the lightness of the RGB image with the Luminance master.

Sharpening: MultiscaleMedianTransform was used to sharpen Layers 2 – 4 with strengths of 0.07, 0.05 and0.03, respectively.

Star Restoration: Stars removed using StarNet2 above were added back into the image using straight addition in PixelMath.