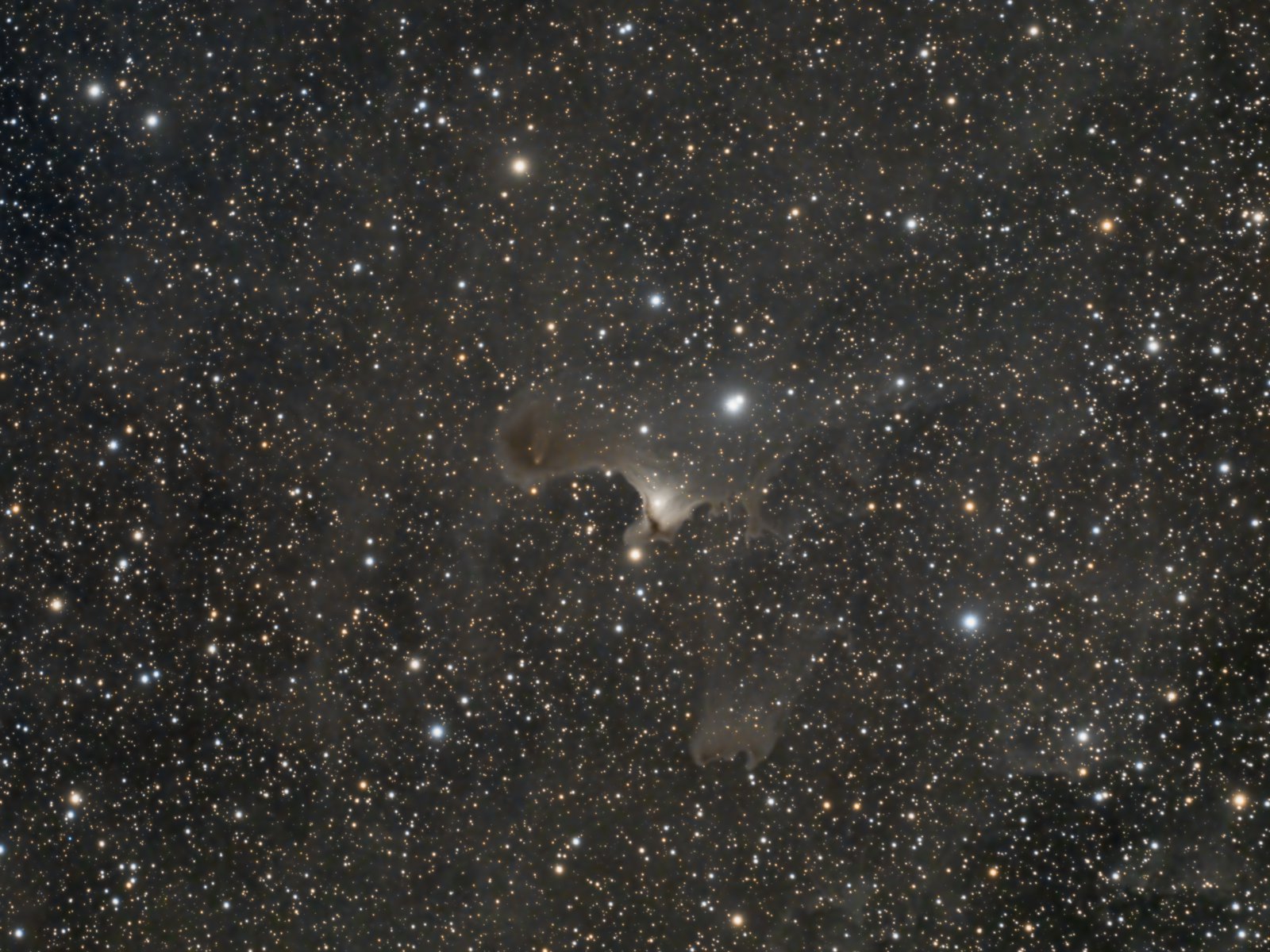 Sh2-136 is nicknamed the Ghost Nebula, and is also catalogued as vdB-141. It glows very faintly in the constellation Cepheus, and is the brightest structure at the centre of this image. It is a classified as a globule, and is 2 light years across. This region of the sky is full of faint reflection nebulae that are visible in photos, shining by reflected starlight. See the finder chart below for its location in the sky. There are also a couple of other catalogued nebulae in this field: dark nebula LDN 1177 and bright nebula LBN 495. Note that so-called bright nebulae aren’t bright at all. They are typically very faint, but are given this name to distinguish them from dark nebulae – patches of dust and soot that block out the light of stars behind them.

Data Reduction and Initial Processing
Preprocessing: The WeightedBatchPreProcessing script was used to create a Luminance master frame from the mono camera and an RGB master frame from the one-shot colour camera. DrizzleIntegration (2x CFA Drizzle) was applied to the RGB set. The RGB master was registered to the Luminance master using StarAlignment.

Temporary Star Removal: Starnet2 was used at default settings to temporarily remove the stars and produce a separate image containing the stars.

Nonlinear Noise Reduction: TGVDenoise was used in L*a*b* mode to reduce noise with the starless image selected as the Local Support image (used like an external mask would be, to target the background areas and protect the stars and galaxy) (max. 1,000 iterations and convergence selected for both lightness and chrominance).

Contrast Enhancement: LocalHistogramEqualization was applied three times to the starless image using a mask to protect the background, with one iteration each at maximum contrast of 1.5 and scales of 20, 50 and 150 (strength 0.2, 0.18 and 0.25 respectively).

Sharpening: MultiscaleMedianTransform was used to sharpen Layers 2, 3 and 4 with strengths of 0.15, 0.07, and 0.05, respectively, through the same mask used for the previous step.

Addition of Stars to Starless Image: PixelMath was used to add the stars back into the starless image using the expression $T + star_mask with rescaling.