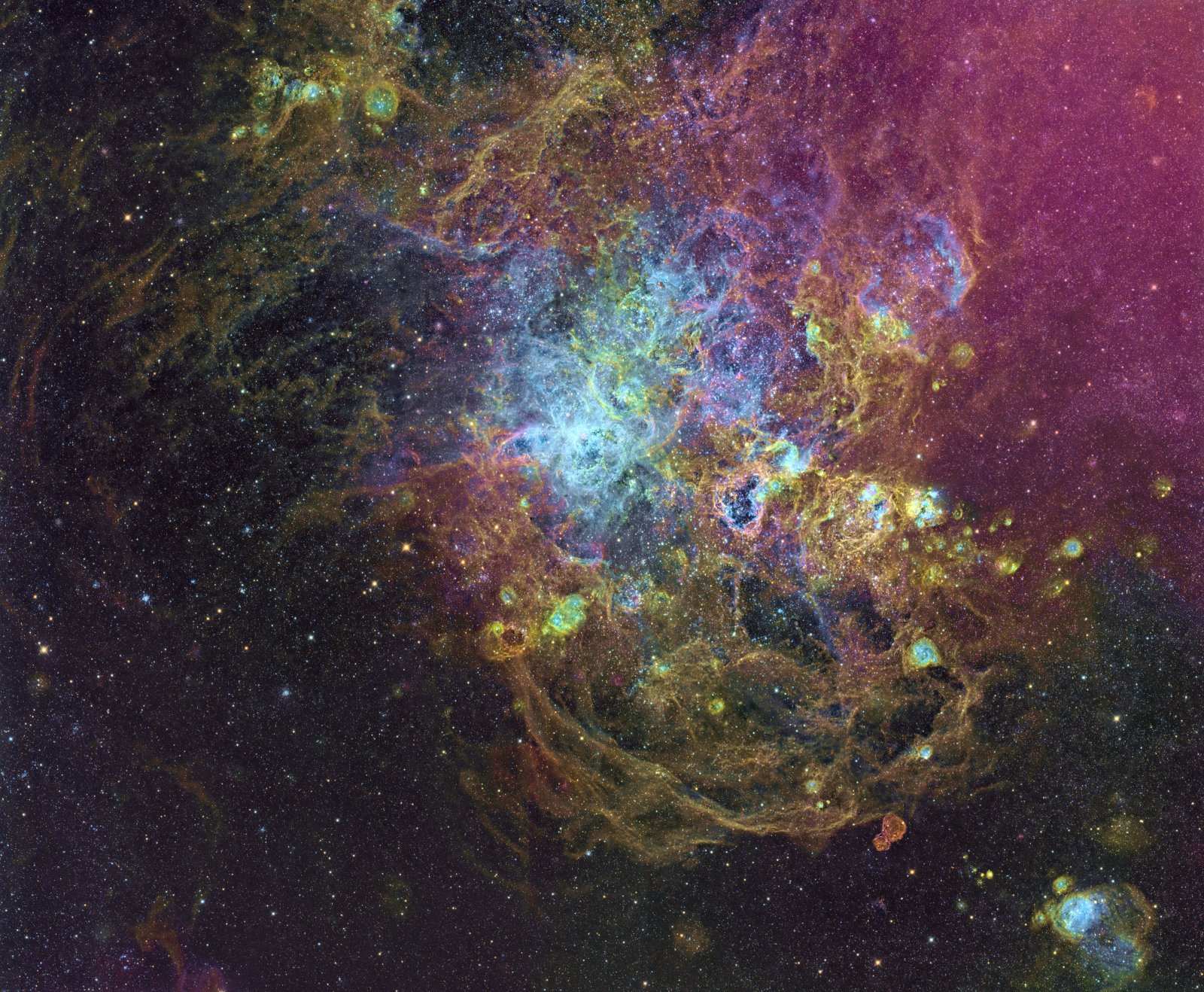 NGC 2070 is more commonly known as the Tarantula Nebula (also known as 30 Doradus). It is a far southern object located in the constellation Dorado, within the Large Magellanic Cloud (LMC) about 180,000 light years away. The LMC is the second- or third-closest galaxy to our own Milky Way. I viewed the LMC and the Small Magellanic Cloud (SMC) with my naked eye and binoculars from Costa Rica (latitude 4oN) over the Pacific Ocean, where it looked like a dim cloud on the horizon.

NGC 2070 a is a gigantic star forming region, a little like the Milky Way’s Orion Nebula (M42). However, the Tarantula is considered to be the most violent star forming region in the lo9cal group of galaxies, and the largest. At its centre is a cluster of stars called R136 whose energy causes the Tarantula’s gases to glow with emissions of gases – mainly hydrogen and oxygen.  There is a lot of dust in the region which blocks visible light but allows infrared wavelengths to pass. The recent James Webb Space Telescope near-infrared image revealed thousands of stars that had never been seen before.

There are dozens of catalogued features within the Tarantula region, many of which are shown in this annotated image.  I recently posted a broadband image of the same region. 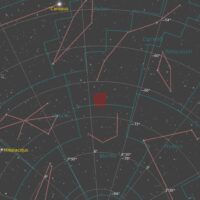 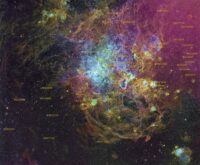 DynamicCrop was used to crop all the masters identically. DynamicBackgroundExtraction was applied to each master.

Linear Noise Reduction: NoiseXterminator was used on boh the SHO and RGB masters with settings Amount=0.9 and Detail=0.25

Stretching:  HistogramTransformation was applied to make a pleasing yet bright image from each of the SHO and RGB masters.

Deconvolution:  A stretched clone of the SynthL image was used to make a mask selecting the bright areas of the nebula for deconvolution. Stars were removed from the mask using StarXterminator. Deconvolution was applied (20 iterations, regularized Richardson-Lucy, ParametricPSF mode with default settings; Global dark deringing = 0.03; Global bright deringing 0.004).

Combining Synthetic Luminance and SHO Colour Images
Luminance addition: LRGBCombination was applied to replace the lightness of the SHO image with the SynthL.

Star Removal:  StarXterminator was used to remove stars from the SynthLSHO and RGB images.

Additional Processing
Nonlinear Noise Reduction: NoiseXterminator was used to reduce noise in the background areas of the SynthLSHO image with settings Amount=0.9 and Detail=0.5

Sharpening: MultiscaleMedianTransform was used with the same mask used for Deconvolution to sharpen Layers 1 – 4 with strengths of 0.03, 0.07, 0.08 and 0.05, respectively.

Star Restoration: The stars extracted from the RGB image by StarXterminator were added back into the SynthLSHO starless image using straight addition in PixelMath.

Star Reduction: MorphologicalTransformation was used in Morphological Selection mode to slightly reduce the size of stars. A clone of the stars extracted from the SynthL image was used as a mask.

Final Steps: Background, nebula and star brightness, contrast and saturation were adjusted in several iterations using CurvesTransformation with masks as required. ICCProfileTransformation (sRGB IEC61966-2.1; Relative Colorimetric with black point compensation) was applied prior to saving as a jpg.