There is so much going on in this image it is hard to know where to start. The image is dominated by hydrogen-rich emission nebula lying just west of the line connecting Deneb and gamma-Cygni (γ-Cyg), and some of the objects within it are identified in an annotated image that I prepared. The Propeller Nebula (DWB 111) is at upper right. The pretty blue patches are reflection nebula; from top to bottom they are NGC 6914, vdB 132 and vdB 131. There are also many bright and dark nebula that belong to the LBN and LDN catalogues, respectively, though they are not labelled in the annotated image. To round out the field, dark nebula Barnard 346 is near top left, and open cluster Cr 421 is just left of centre at the bottom of the image.

All of these objects lie around 6,000 light years away, considerably farther than the 1,600 light years distance to the nearby (in the sky) North America Nebula near Deneb, and IC 1318, which surrounds γ-Cyg. 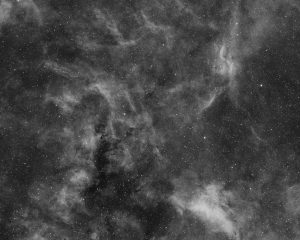 This field is located in a very rich part of the Milky Way, which is why there are so many stars in the image. I prepared a black and white version that uses only H-alpha (deep red) data, and shows more subtle brightness differences and smaller stars. Click on the thumbnail to see it full size.

Synthetic Luminance:
Creation and cleanup of SynthL: Prior to noise reduction of the NB-RGB image, RGBWorkingSpace was used to equalize all the channels and the luminance was extracted for separate processing.

Additional Processing:
Contrast Enhancement: The contrast was boosted with two passes of LocalHistogramEqualization with max contrast of 1.5 (scale 50, strength 0.45 and scale 150, strength 0.18) using a mask to protect background and stars. The mask was made by making a very blurred range mask with the RangeSelection tool and a star mask with the StarMask tool, and then using PixelMath to subtract the star mask from the range mask without rescaling.

Final Steps: MultiscaleLinearTransform was used to sharpen the structures in the bright parts of the nebulae (layers 2-4 at 0.05). Background, nebula and star brightness, contrast and saturation were adjusted in several iterations using Curves with masks as required. Stars were reduced in size using the Morphological Selection mode of the MorphologicalTransformation tool and blending the result with a copy of the image processed with the StarReduction script. The DarkStructureEnhance script was used to increase contrast between dark nebula and brighter regions.