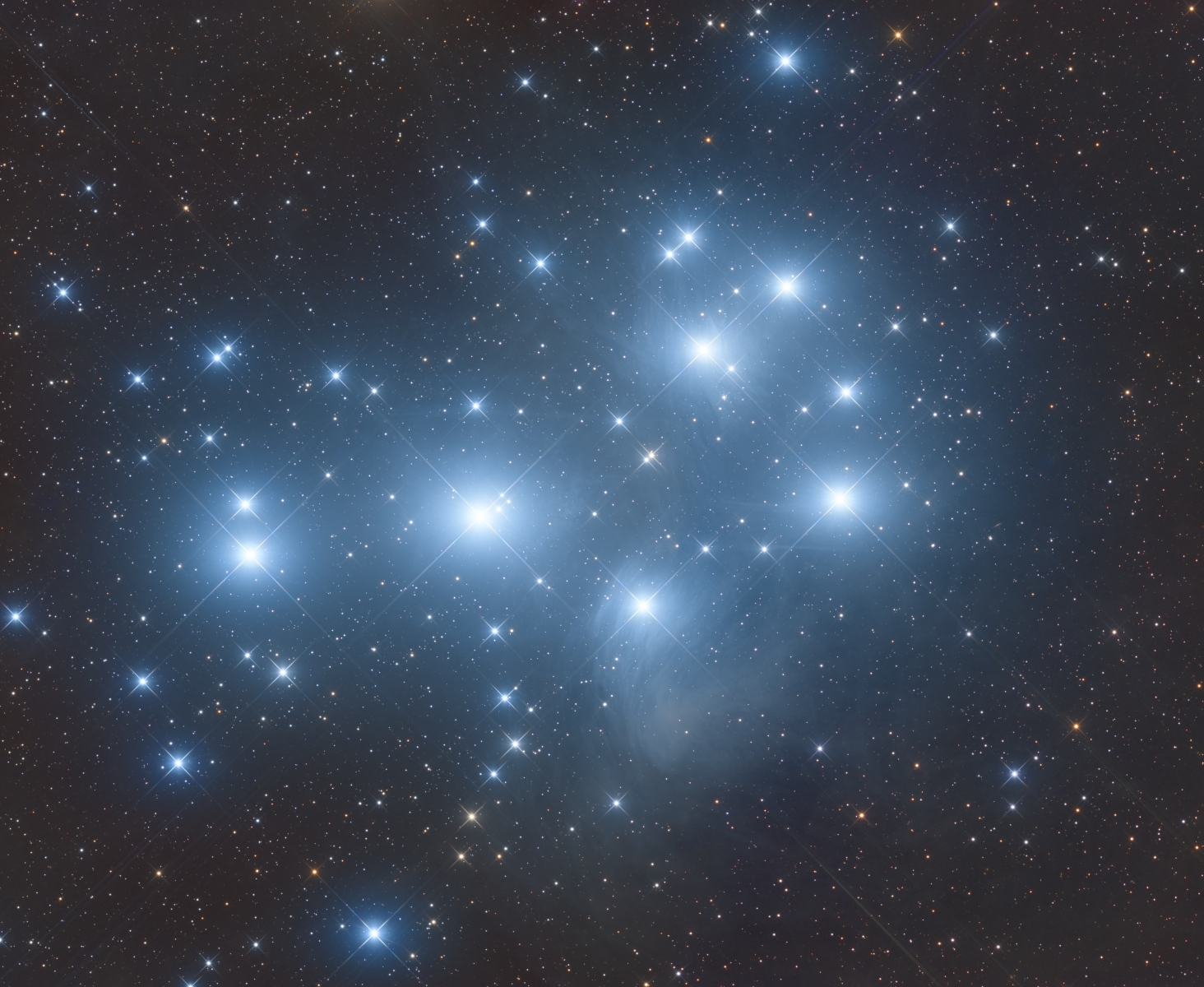 The attached image shows M45, better known as the Pleiades, or the Seven Sisters. In Latin America, it’s called “the Seven Kids”, as in baby goats). The Pleiades was observed and written about long before Messier catalogued it.  Galileo published a sketch in 1610 that showed 36 stars that he could see with his telescope. The earliest known depiction of the Pleiades is from is about 17,000 years old: a cave drawing in the Lascaux Cave in France. If you get a chance, have a look at this object through binoculars.  It is spectacular and well placed high in the eastern sky at dusk this time of year.

The blue haze around this star cluster is a reflection nebula – star light is being reflected of soot/dust particles in the background. There’s also some pinkish emission nebula in the central lower portion of the nebula and dim brownish dust mottling the outer parts of this field (called “cirrus”). 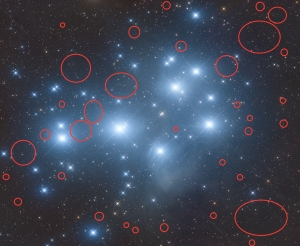 Although the Pleiades is the dominant object in this shot, there are also hundreds of galaxies visible. I have posted an annotated image that highlights the location of some of them. I encourage you to load the image and zoom in on the highlighted areas to see the many faint fuzzies.

M45 is about 440 light years from us and contains at least 1000 members in the cluster.  The stars have been estimated to be between 75 and 150 million years old.  The brightest cluster stars belong to class B, and are very hot bluish stars. The galaxies in the field are much further away, up to hundreds of millions of light years.

Mosaic Creation
R, G and B masters for both frames were cropped to remove edge artifacts and processed separately with DBE. ImageRegistration was used in mosaic/union mode to make a mosaic template from the blue image of Pane 1 and Pane 2. ImageIntegration was used to align each channel of each pane to the template. GradientMergeMosaic was used to merge Pane 1 and Pane 2 of each channel, to give three master images (R, G and B).  Edge artifacts were cropped.

RGB
Creation and cleanup:  R, G and B masters were combined to make an RGB image which was processed with DBE and ColorCalibration.

Deconvolution:  A star mask was made to use as a local deringing support. A copy of the image was stretched to use as a range mask. Deconvolution was applied (50 iterations, regularized Richardson-Lucy, external PSF made using DynamicPSF tool with about 25 stars).

The bright portions of the nebula were slightly sharpened with MultiscaleLinearTransform (bias +0.05 for layer 2 and 3 and bias +0.02 for layer 4).Background and star brightness, contrast and saturation were adjusted in several iterations using Curves with masks as required.