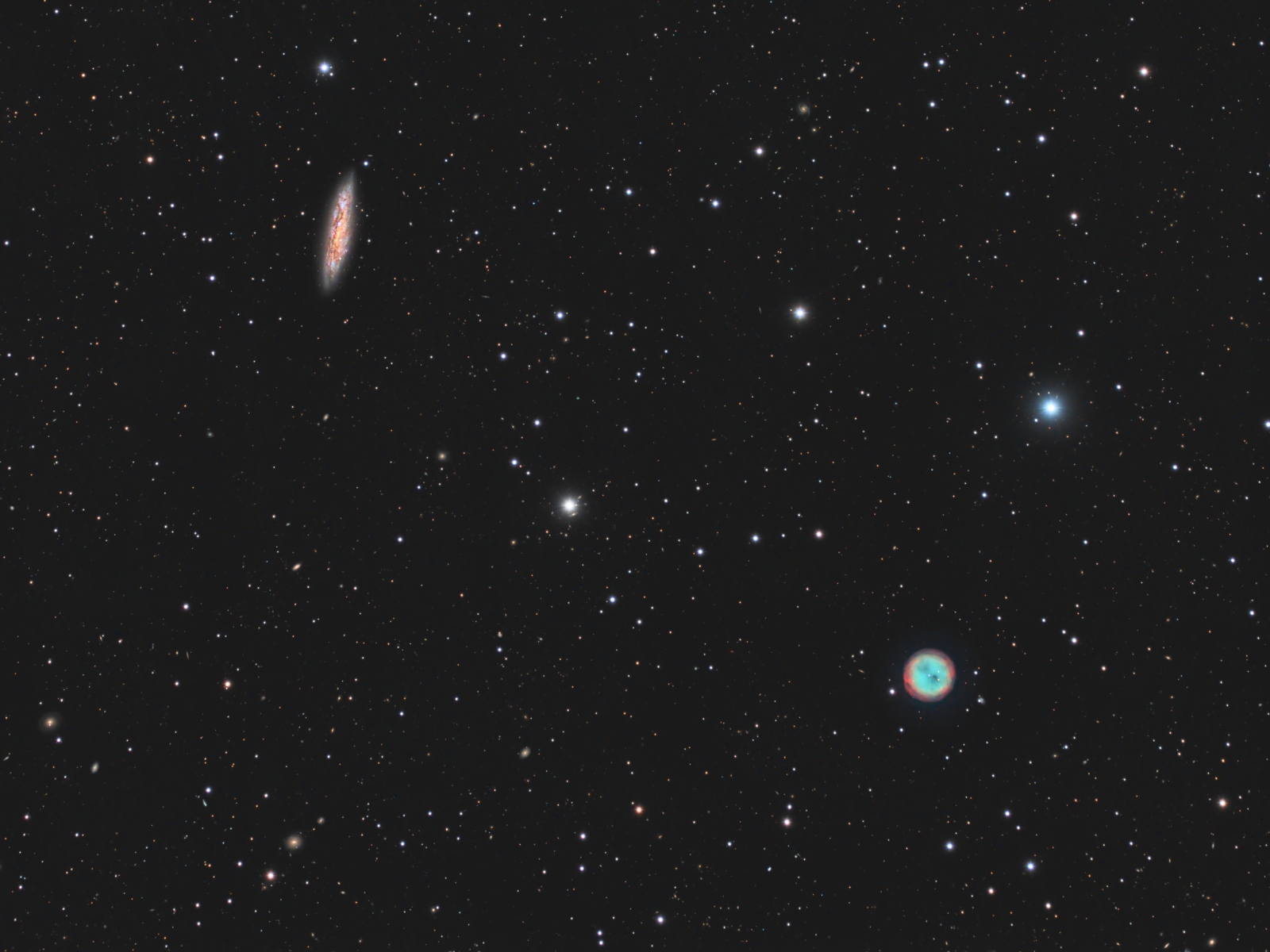 M108 (upper left) and M97 (lower right) are the main subjects of this picture. This field lies in Ursa Major, near Merak, the lower-right star of the Big Dipper’s bowl.

M108 lies about 46 million light years away and belongs to the Ursa Major galaxy cluster, which in turn is a member of the Virgo Supercluster of galaxies. This very active galaxy displays the full range of colours found in some spiral galaxies, including pink nebula, blue star clusters, a yellow/orange core and many dark brown dust lanes throughout. The super-massive black hole at the centre of M108 has a mass about 24 million times the Sun’s.

Compared to M108, the Owl Nebula is just a stone’s throw away at 2,600 light years. The planetary nebula formed about 8,000 years ago from the gas thrown off by the evolving central star. That star has reached the white dwarf stage and is currently much brighter and hotter than the Sun. Its energy causes the nebula’s hydrogen, oxygen and other gases to glow. With a little more than 1/10th the Sun’s mass, M97 is spread out so thinly that there are fewer than 100 particles per cubic centimetre.  It is currently a little less than a light year wide, expanding at a rate of 27-39 km per second, and will eventually become so diffuse that it will no longer be visible. I’ve never really seen the “Owl” in M97. The Owl Nebula’s nickname stuck after the 3rd Earle of Rosse, William Parsons, sketched it in 1848 with an appearance resembling an owl’s head. 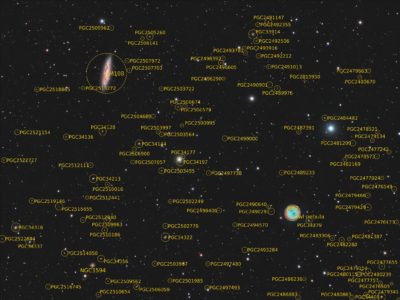 This image includes hundreds or maybe thousands of galaxies that lie much further away than M108.  Look for streaks and smudges that look different from the sharper stars. The annotated image at left shows some of them. One of the most interesting in this field is the spiral galaxy PGC33914, which is at the top of the image to the right of centre. There are many more galaxies in this image that are not marked in the annotated image.

Image scale 1.15 arcsec per pixel (based on Luminance and narrowband resolution)

Data Reduction and Processing
Preprocessing: The WeightedBatchPreProcessing script was used to create Luminance, Ha and O3 master frames (from the mono camera) and a RGB master frame (from the one-shot colour camera). MUREDenoise was applied to the three monochrome masters. The colour master was integrated with DrizzleIntegration.

Gradient Removal: DBE was applied to each master using Subtraction to remove the gradients that remained after integration.

Lightness, Ha and O3
Deconvolution:  StarMask was applied to the Lightness with default settings to produce a Local Deringing Support Image. A clone of the image was stretched to use as a deconvolution mask. Deconvolution was applied (100 iterations, regularized Richardson-Lucy, external PSF made using PSFImage script with about 50 stars).

Stretching:  HistogramTransformation was applied to make a pleasing, bright image from each master, with background set to an intensity of approximately 0.10.

Combining Lightness and Colour Images
Registration of L and RGB: DynamicAlignment was used to register the RGB master to the L master.

Additional Processing and Addition of Narrowband
Nonlinear Noise Reduction: TGVDenoise was used in L*a*b* mode to reduce noise with a mask used to target the background areas and protect the stars (max. 1000 iterations and convergence selected for both lightness and chrominance).

Sharpening:  The nebula was sharpened with a pass of MultiscaleLinearTransform (bias +0.15 on 2nd and 3rd layers and dark deranging = 0.05).

Addition of Ha to Galaxy: A modified clone of the Ha master  (with all but the galaxy black) was used as a mask. Red, Blue and Saturation were boosted using curves to bring out the Ha knots. 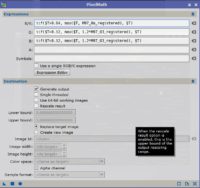 Addition of Ha and O3 to Nebula: The narrowband masters were blended into the nebula using the PixelMath expression shown at left (click to see larger size), with masks to protect the rest of the image.