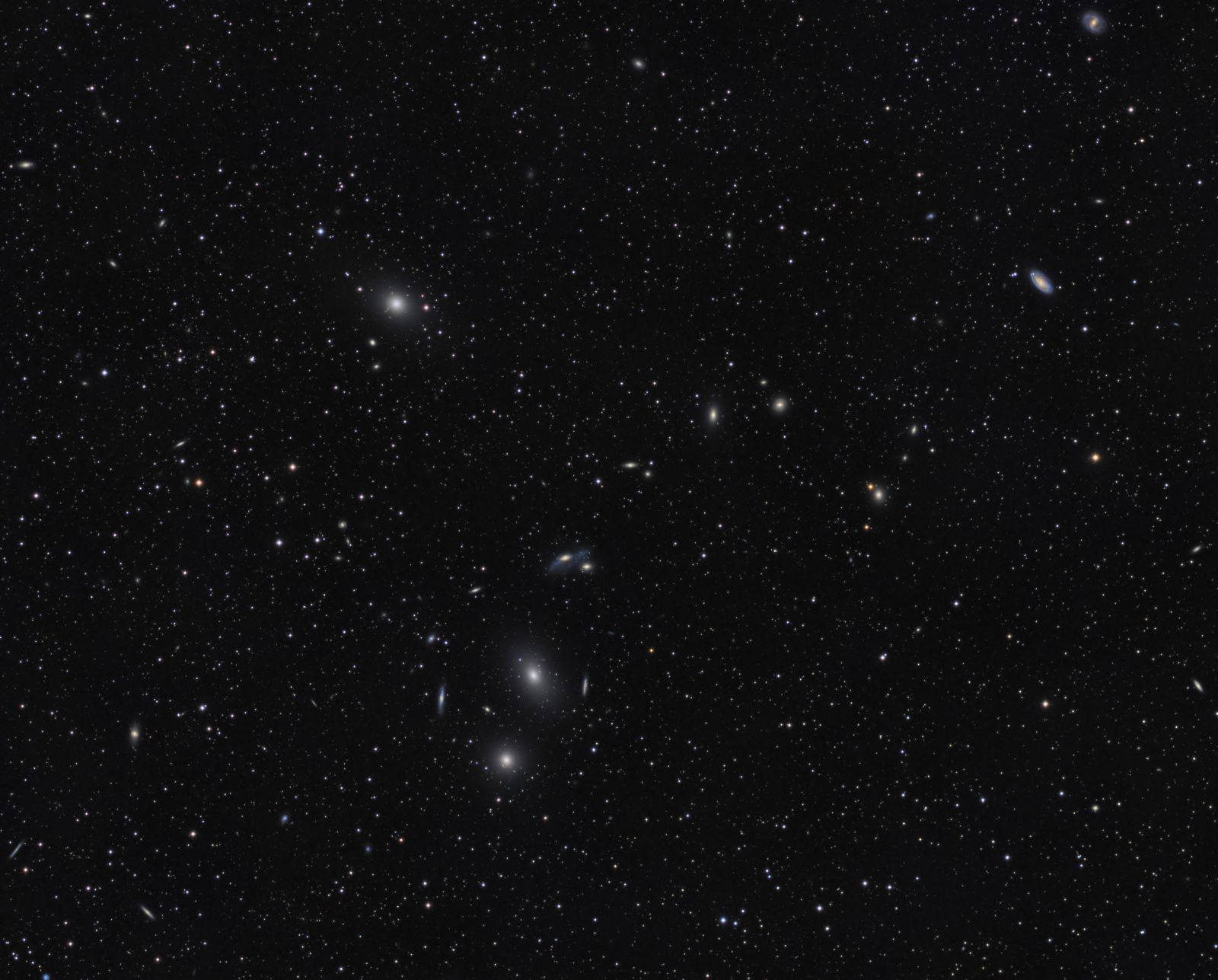 Markarian’s Chain is the name of the curved chain of galaxies prominent in the lower centre of this image. This chain of galaxies is part of the Virgo Galaxy Cluster, the centre of which is about 54 million light years away. This cluster contains about 1500 galaxies and is estimated to have a total mass of about 10 quadrillion times the Sun’s (1 quadrillion = 1 million billion). This image captures less than half the area of the entire galaxy cluster. There are many Messier and NGC objects in this image, some of which show nice detail. I have prepared an annotated image to help you find your way around.   M87, the large elliptical galaxy to the upper left of Markarian’s Chain, is near the physical centre of the Virgo Cluster. M88 and M91, both near the upper right of the image, show striking colour and detail. NGC4438 and NGC4435 make a close pair known as “The Eyes,” near the centre of Markarian’s Chain.  NGC4438 is the larger, more blue galaxy of the pair. I did not include the PGC catalogue galaxies in the annotated image, since the thousands of labels would have rendered it useless. Suffice it to say that there are many more galaxies in this image than are identified on the annotated image.

RGB Creation
Creation and cleanup:  The BatchPreProcessing script was used to perform calibration, cosmetic correction and registration of all frames. DrizzleIntegration was used to make the channel masters. The R, G and B masters were cropped and processed separately with DBE, and then combined to make an RGB image which was processed with ColorCalibration.

Stretching:  HistogramTransformation was applied to the RGB image to make a pleasing, bright image. SCNR was used to reduce green cast in some background areas.

Final Steps: MultiscaleLinearTransform was used to sharpen the structures in the bright parts of the galaxies that displayed structure (layers 2-4 at 0.07), followed by a pass of TGVDenoise on the L channel only, using default settings. Background, galaxy and star brightness, contrast and saturation were adjusted in several iterations using Curves with masks as required. MorphologicalTransformation was applied to the large and medium-sized stars with the Morphological Selection operator (size 3, 3 iterations, amount 0.5, selection 0.23). The image was then down-sampled by a factor 2 using IntegerResample to restore the data to the original resolution at which it was acquired.