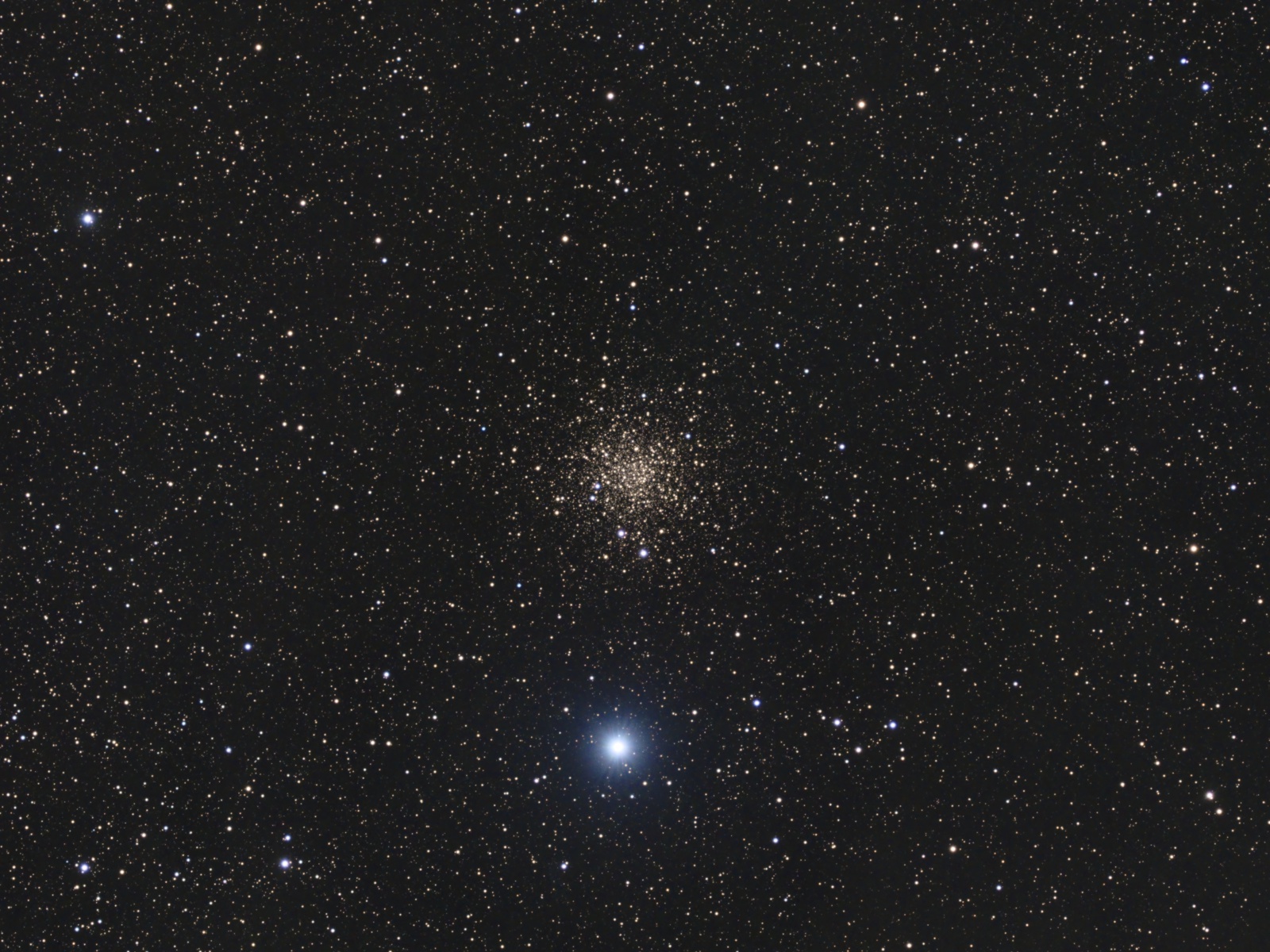 More than 150 globular clusters orbit the Milky Way’s core.  Each is a more-or-less spherical grouping of hundreds of thousands of stars tightly held together by gravity.  Some, like M13 are big, bright, tightly packed and spectacular.  Others… not so much.

NGC 6366 is usually overlooked in favour of the splashier globular clusters of Ophiuchus, like M10, M12 and M14.  It is so sparse that it barely looks like a globular cluster at all. It is small and dim, covering only as much sky as 1/4 of the full moon.

Although it might not compete with its siblings for brilliance, there are some facts that make it interesting: it is a “metal rich” cluster, meaning its stars have relatively large amounts of elements heavier than hydrogen and helium.  It contains relatively few low mass stars; one theory is that the lower mass stars have been stripped away by the main portion of the Milky Way galaxy through “tidal stripping.”

This object was imaged during the week of June 13-20, 2020, the best prolonged stretch of imaging conditions I’ve ever encountered since beginning astronomy in 1998: steady, transparent skies with little or no moonlight for seven nights in a row!

A previous version was published in the September 2015 Astronomy Magazine. Another image, from 2017, is posted here. It’s interesting to compare how my equipment, processing workflow, and results have evolved over only 5 years.

Tekkies:
Acquisition, focusing, guiding and control of Paramount MX mount with TheSkyX. Focus with Optec DirectSync motor and controller. Automation with CCDCommander. Equipment control with PrimaLuce Labs Eagle 3 Pro computer. All pre-processing and processing in PixInsight. Acquired from my SkyShed in Guelph. Average or better transparency and seeing. Data acquired June 13-17, 2020 in a moonless sky.

Data Reduction and Initial Processing
Preprocessing: The WeightedBatchPreProcessing script was used to create a Luminance master frame (from the mono camera) and a Drizzled RGB master frame (from the one-shot colour camera). The MURE Denoise script was applied to Luminance master.  Damaged cores of a few bright stars in the Drizzled colour frame were replaced with corresponding pixels from a scaled-up non-drizzled master.

Colour
Channel Registration:  To improve channel registration, the colour channels of the RGB master were extracted and aligned with StarAlignment, using Thin Plate Splines with Distortion Correction and the luminance master as the reference frame. The registered colour channels were recombined with ChannelCombination.

Stretching: MaskedStretch was followed by a contrast boost with CurvesTransformation to make a pleasing, bright image, with background intensity of approximately 0.10.