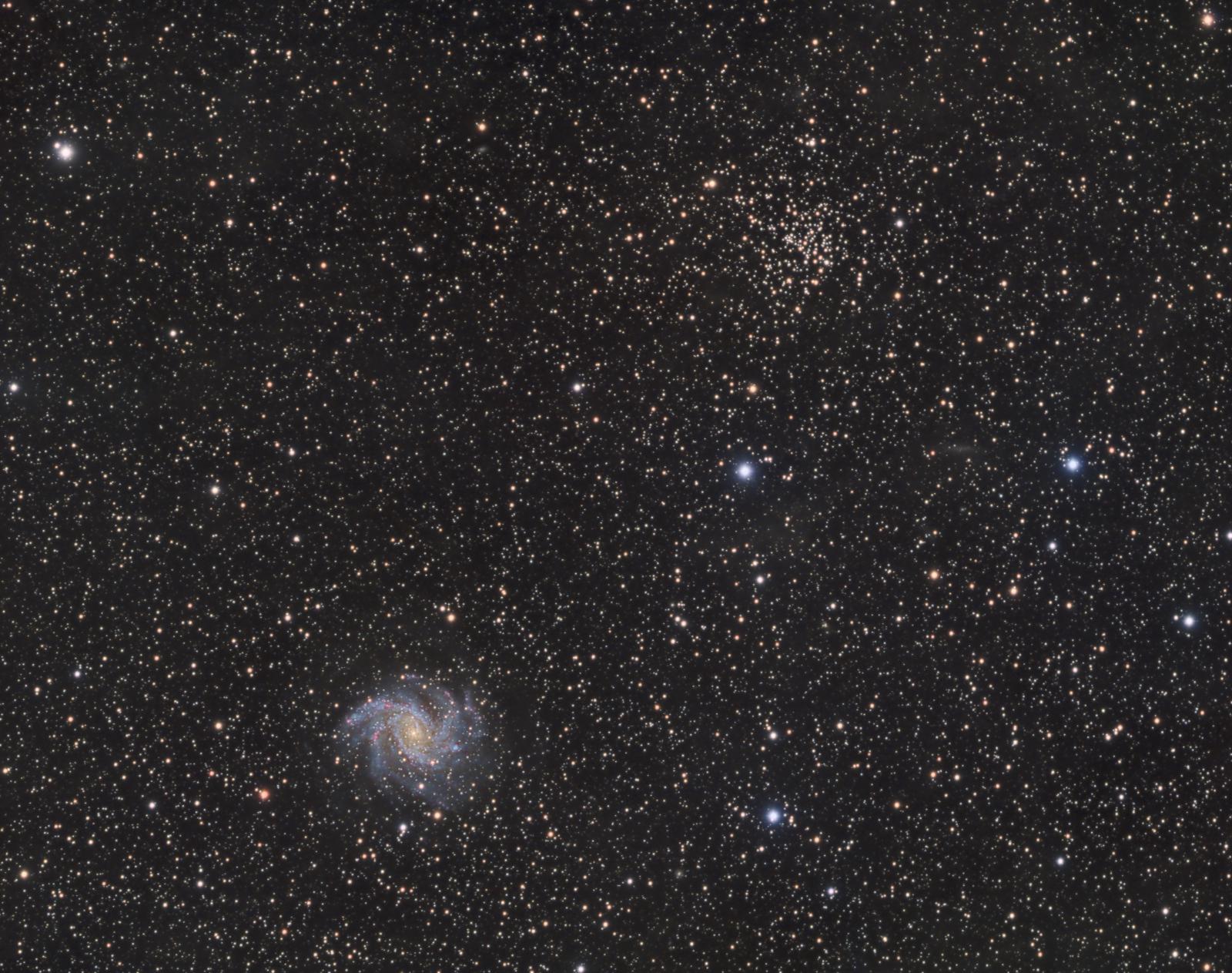 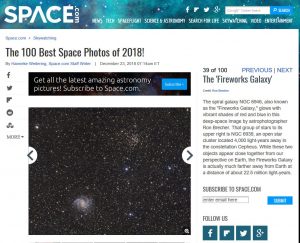 NGC, 6946, at lower left, is commonly known as the Fireworks Galaxy, and it’s easy to see why.  The reddish highlights are star-forming regions, similar to the Orion Nebula in our own Milky Way galaxy. NGC 6946 is 22 million light years away. We see it face on, so it’s possible to see lots of dark dusty lanes between the blue arms full of stars. In addition to looking like a fireworks display, this galaxy has acted like one: there have been 10 supernova explosions observed in it since 1917, most recently in 2017. It would appear brighter if it wasn’t heavily obscured by our own galaxy’s dust lane. There’s likely a black hole gobbling up stars concentrated in the bright core of the galaxy.

At upper right in this image, open cluster NGC 6939 sparkles with a reddish hue due its extreme age of  2.2 billion years. Its blue and white stars have long since exhausted their fuel and are no longer visible. I’ve glimpsed this open cluster in binoculars, and it is lovely in a telescope of any size. It is about 3,860 light years away. Although NGC 6939 and NGC 6946 cover about the same amount of sky (1/4 the Moon’s diameter), the galaxy is nearly 6,000 times further away!

This image includes wisps of the Integrated Flux Nebula — reflections off dust and soot of the combined glow of the Milky Way’s stars. You can see this diffuse glow throughout the image, but most prominently below the blue star that sits right of centre in the image. It is also easy to spot in the upper left quadrant and around NGC 6946.

Sky-Watcher Esprit 150 f/7 refractor, QHY 16200-A camera, Optolong Ha, L, R, G and B filters, Paramount MX. Acquisition with TheSkyX. Guided with 175mm Guide scope and QHY5 camera. Focused with TheSkyX @Focus3. Automation with CCDCommander. All pre-processing and processing in PixInsight. Acquired from my SkyShed in Guelph. No Moon for L, moderate moonlight for Ha and RGB, average to excellent transparency and fair to average seeing. Data acquired August 8 – September 3, 2018.

Data Reduction and Cleanup
The BatchPreProcessing script was used to perform calibration, cosmetic correction and registration of all frames. ImageIntegration was used to make the L, Ha, R, G and B masters. DynamicCrop was used to crop all the masters identically. DynamicBackgroundExtraction was applied to each master, first with Division, then with Subtraction.

Chrominance:
Creation and cleanup:  The R, G and B were combined to make an RGB image which was colour-balanced with PhotometricColorCalibration.

Addition of Ha to RGB:  The NBRGB script was used in linear mode to add the Ha to the SynthLRGB. A multiplier of 1.2 was selected for the narrowband contribution. The resulting image was blended back into the RGB using a mask to protect everything other than the Ha-patches. The mask was made by slightly stretching the Ha image and then using CloneStamp to blacken everything except the Ha knots in the spiral arms.

Deconvolution:  A star mask was made to use as a Local Deringing Support image. A copy of the image was stretched to use as a range mask. Deconvolution was applied (50 iterations, regularized Richardson-Lucy, external PSF made using DynamicPSF tool with about 20 stars).

Noise Reduction and Re-Stretch: TGVDenoise was applied in L*a*b* mode with 1,000 iterations (convergence at 0.004) with a range mask applied to protect high signal areas.  This was followed by a HistogramTransformation to raise the black point (but with no clipping).

Combining Luminance and Chrominance:
LRGBCombination was used to apply the SynthL to the chrominance image.

Additional Processing
Nonlinear Noise Reduction: TGVDenoise was used in L*a*b* mode only on the chrominance channels to reduce noise in the background areas.

Brightening the Integrated Flux Nebula: The large-scale structures were extracted to a new image named “LS” using MultiscaleLinearTransform with the first 7 wavelet layers deselected and Residual selected. LS was subtracted from the original using PixelMath to make a Small-scales image, called “SS.”  LS was processed with Curves to increase brightness and contrast.  LS was then added to SS and the result applied to the original SynthLHaRGB using ChannelCombination.

Sharpening: Using a mask to select the galaxy and protect stars, background and dim nebulosity, MultiscaleLinearTransform was used to sharpen Layers 2 and 3 (strengths of 0.1 and 0.2 respectively).