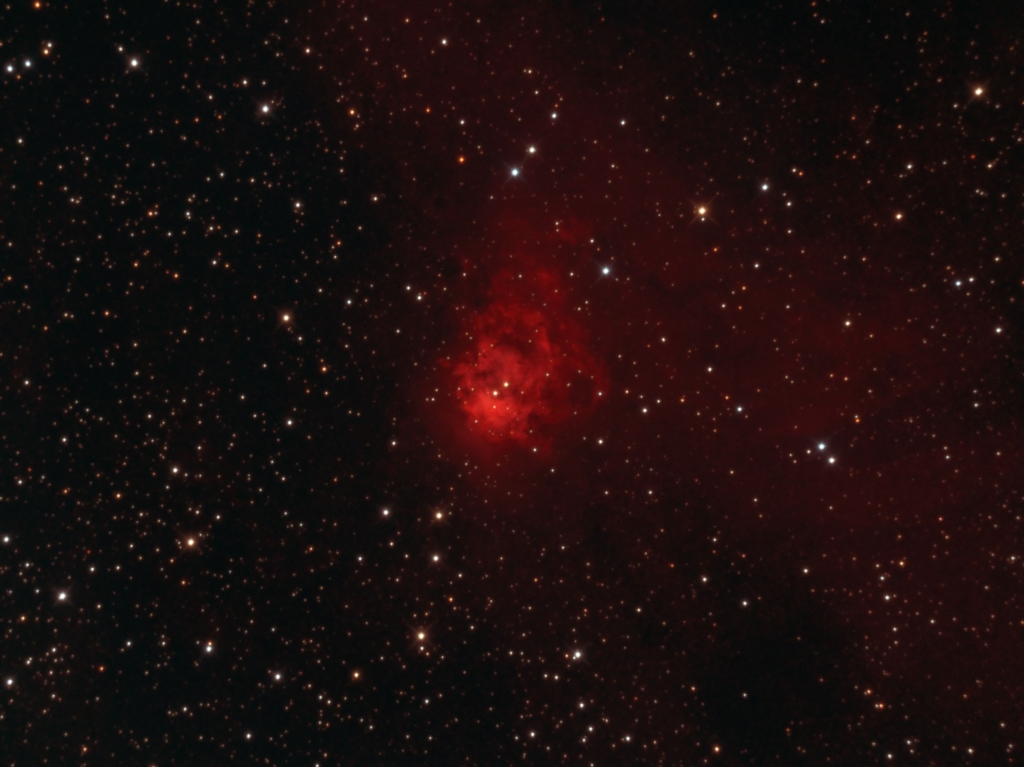 Cassiopeia and Cepheus are the Queen and King of the northern sky.  Just after sunset at this time of year, Cass. looks like a W low in the northeast.  Cepheus lies a little higher up in the northeast.  In and around this area are lots of the open star clusters that lie along the arms of the Milky Way galaxy (the one that we’re in), and also plenty of red emission nebulae.  NGC7538 is in Cepheus and is rather overlooked, probably because there’s a lot of showpiece objects in the area, like the Bubble Nebula.  I shot this picture on the night of August 4 in so-so conditions  NGC 7583 is glowing from the light of excited hydrogen atoms, and contains the largest protostar (a collapsing ball of rotating gas that’s on the way to becoming a star) yet discovered, along with additional ones on the way to being fully-fledged stars.  The distance to NGC7538 is estimated at around 9100 light years.

All processing was done in PixInsight except for one sharpening step.   Dynamic Background Extraction was applied to the Ha and RGB and L images.  Then the red channel was extracted and modified by blending with the Ha data using Vicent Perris’ formula in PixelMath.  The new red channel was combined with the original green and blue channels to make an HaRGB image.  This was processed with Colour Balance, histogram stretch, masked sharpening, curves and noise reduction (masked, 2 different noise scales).   Similar processing was performed on the L channel.  The L was then added to the HaRGB image and saved as a 16-bit tif file. Photoshop was used for slight and selective sharpening with a high-pass filter layer blended using the soft light blend mode, heavily masked, and then a final tweak was made to the colour balance and saturation.  Image scale for this telescope/camera combination is 0.68 arcsec/pixel.