Skip to content
Previous Next
M51, The Whirlpool Galaxy 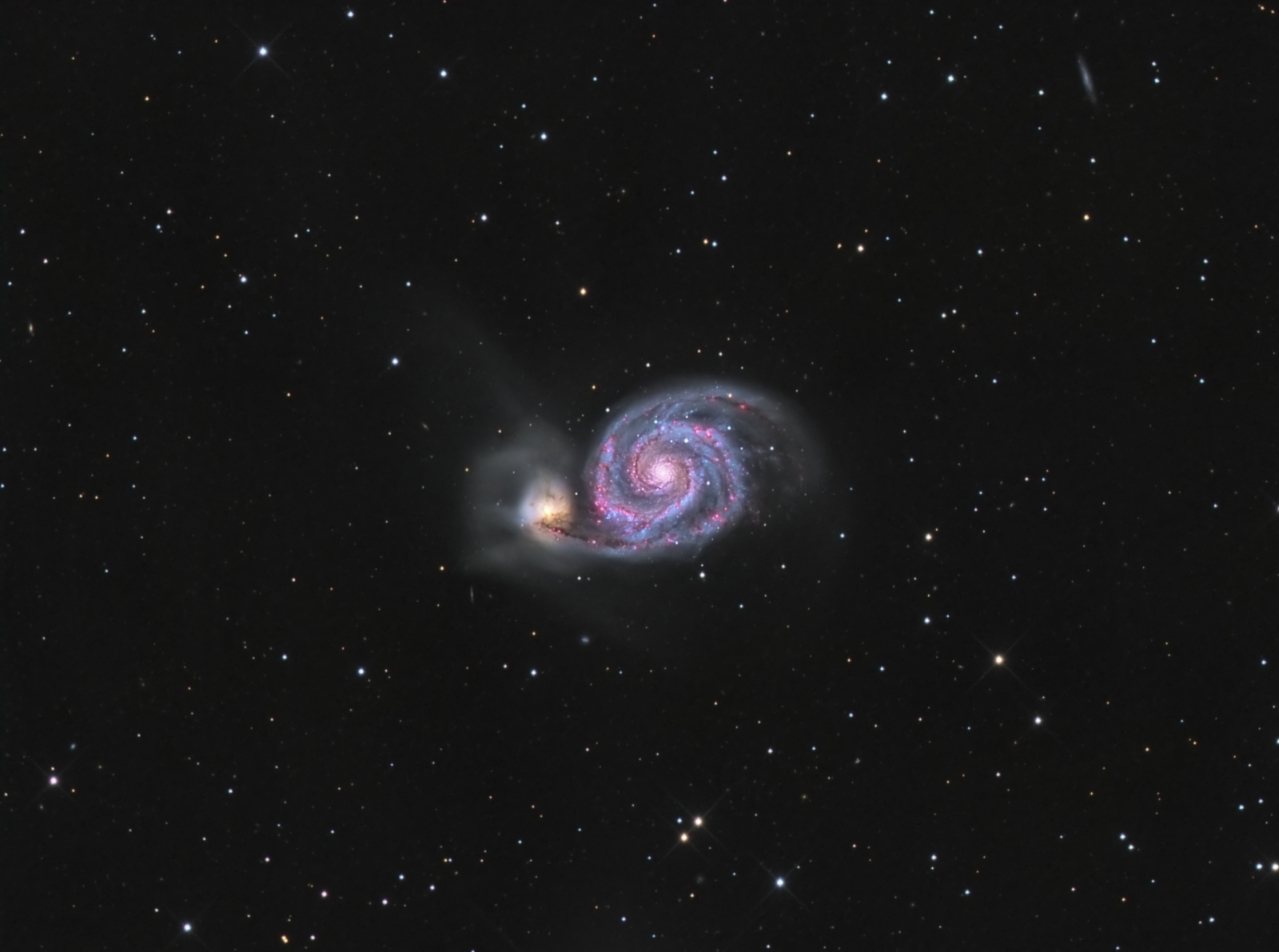 I have taken images of the Whirlpool Galaxy before, several times in fact, with different telescopes and cameras over the years.  This shot is my best result yet, and contains data acquired during March and April 2016.

M51 is the galaxy in which spiral structure was first seen, by Lord Rosse in 1845 using a 72-inch telescope known as the “Leviathan of Parsonstown.”   The galaxy was discovered in 1773 by Charles Messier.  It’s fairly bright and I’ve seen it in binoculars in a reasonably dark sky.

Left of the Whirlpool Galaxy is NGC5195.  The two are interacting, and you can see that the smaller galaxy has distorted M51’s arms.  M51 has also smeared out its companion, towards upper left and lower right.  The pair lie about 30 million light years away, beneath the end star of the handle of the Big Dipper.  The Whirlpool Galaxy is about 60,000 light years across and has a mass of around 160 billion times that of our Sun.  The pink features in M51 are emission nebulae, similar to the Rosette Nebula in our galaxy.  The knots in the blue arms are star clusters, similar to M35 and NGC2158.

M51 and NGC5195 are the largest members of the M51 Group of galaxies.  You can see several other members throughout this field.   This group and two others (the M101 group and the NGC5866 group) may be part of a single, large, loose group of galaxies, since all lie at similar distances.

Luminance:
Cleanup:  DBE was applied to neutralize the background of both the 5m and 15m luminance masters.  HDRCombination was used to combine the masters.

Deconvolution:  A star mask was made to use as a local deringing support. A copy of the image was stretched to use as a range mask. Deconvolution was applied (80 iterations, regularized Richardson-Lucy, external PSF made using DynamicPSF tool with about 20 stars).

Dynamic Range Adjustment and Stretching: HDRMultiscaleTransform was applied at 6 and 4 pixel scales, protecting bright stars with a mask. TGVDenoise was applied in RGB/K mode with default settings, followed by HistogramStretch.  A range mask was made that protected stars and background, and LocalHistogramEqualization was applied to the galaxy at a scale of 50, with a strength of 80%.

[Note – I initially tried using a SynthL for luminance, made by combining all the colour channels, but the results were better using the Luminance alone.  This is likely due to significant moonlight during acquisition of the RGB data.]

Combining Luminance with RGB:
The luminance channel of the RGB image was extracted, processed and then added back into the RGB image as follows:

Final Processing:
UnsharpMask was applied to the galaxy using a mask. Contrast, brightness and saturation were adjusted in several iterations with the Curves tool, with separate adjustments were made for background and stars using a mask.