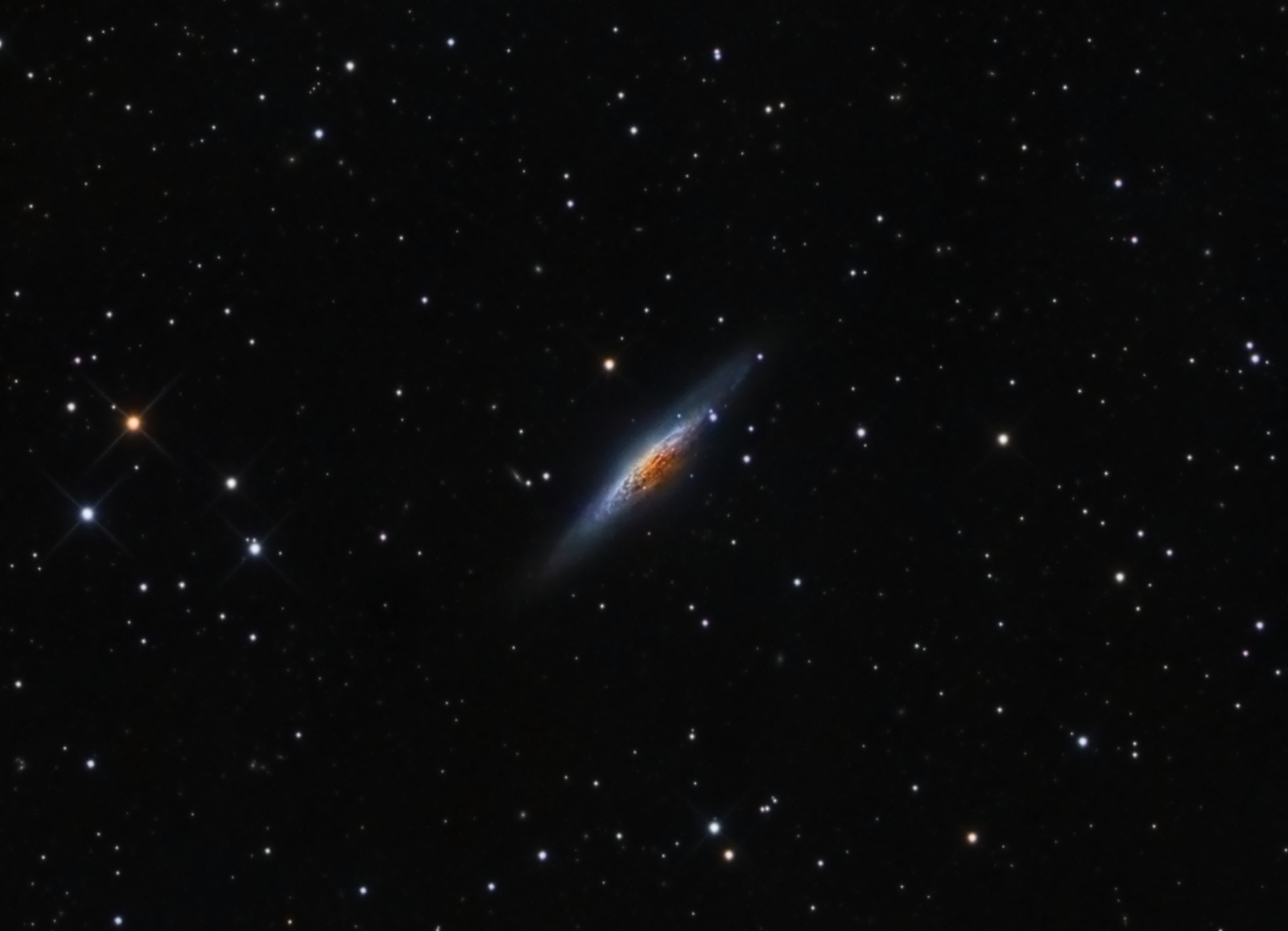 I shot this galaxy at low power in March 2014, and then again over the last few nights at a higher resolution, around 1 arc sec/pixel.   I’ve been trying to follow “the road less traveled” when it comes to choosing objects.  Yes, I am shooting big bright objects too, but I am trying to focus on capturing objects that are less often photographed.  The constellation Lynx is well-placed for early evening observing or astrophotography at this time of year.  However, it is faint and indistinct visually, and I’ve pretty much ignored it up until now.   While flipping through my star atlas, I saw that although it contains many galaxies within its borders, none would be considered real “showpiece” objects.  The most impressive galaxy there is NGC2638.  It is a spiral galaxy (or maybe a barred spiral – there is ongoing debate about this) that lies about 16 million light years away and is nearly edge on to our line of sight.  The galaxy shows a large population of old, yellowish stars and many dust lanes nearer the core, with the bluish tinge of star clusters in the extended arms.  According to a write-up at the NASA APOD website, this galaxy is similar to our own Milky Way galaxy.  There are many other faint galaxies in this image.

Low resolution LRGB (March 2014):  The R, G and B files produced in MaximDL were each background-corrected with DynamicBackgroundExtraction, registered and combined into an RGB image in in PixInsight. The RGB was processed with colour calibration, deconvolution, histogram stretch, HDR Multiscale transform, TGV noise reduction and saturation adjustment.  The luminance was processed with Dynamic Background Extraction, deconvolution, histogram stretch HDR wavelets, TGV noise and Local Histogram Equalization. LinearFit and Lab channel Combination were used to match the luminance of the RGB to the L.  The L and RGB images were then registered and the L applied to the RGB using LRGBCombine in PixInsight. Contrast, colour balance and colour saturation of the galaxy were adjusted using curves.

High resolution Luminance (April 2014):  The luminance master file generated in MaximDL was background corrected with DBE.  Dynamic PSF was used to create a PSF to use with Deconvolution.  The image was then stretched and ACDNR applied to remove fine noise.  After a further stretch, HDR Multiscale Transform was applied to the galaxy core (6 and 4 layers), followed by Local Histogram Equalization to restore contrast.