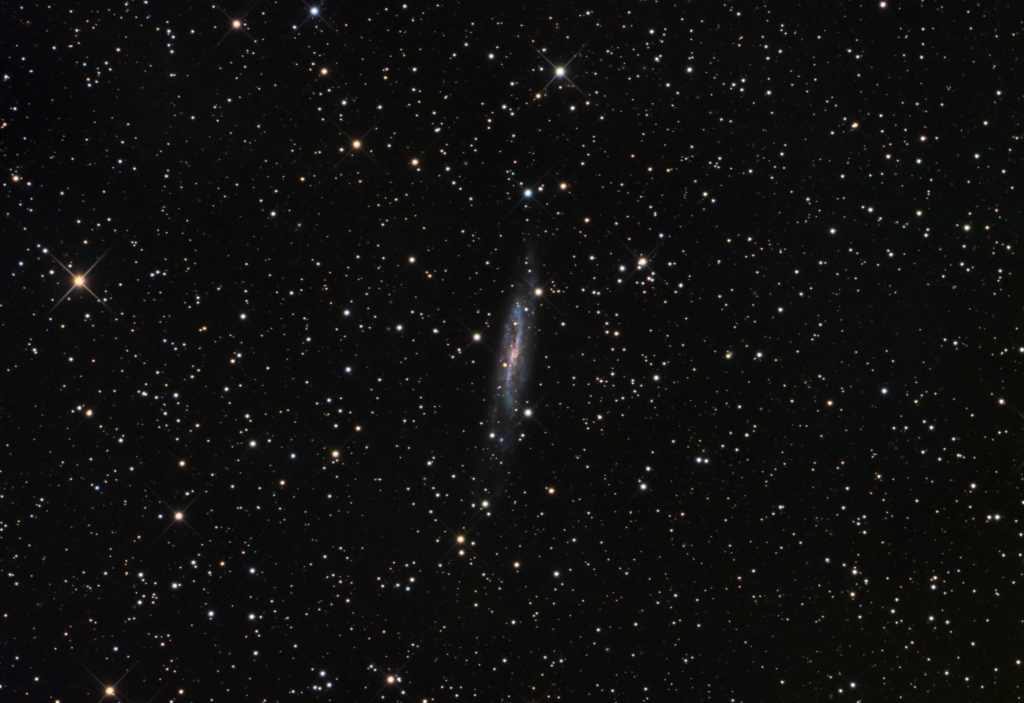 This time of year, there are lots of really big bright objects to shoot, which makes it all too easy to overlook some of the less well known objects.  These objects, although generally smaller, fainter and/or less well-known, are nevertheless just as pretty and interesting to image.   NGC7640 is a perfect example of an overlooked object.  It has to share the same area of sky as the huge, bright and amazing Andromeda Galaxy, M31.  Not far away is the massive Triangulum Galaxy M33.  Amid these riches, this little barred spiral galaxy lies in the constellation Andromeda, nearly edge-on to our line of sight.  You can see the central bar and dust lanes quite clearly, along with plenty of blue star clusters.   It’s around 18 million light years away, and about half the size of the Milky Way galaxy at a diameter of 60,000 light years.  For this reason, it looks quite small, with a length (including the faintest parts) that covers about a third the width of the moon on the sky.

The R, G and B files produced in MaximDL were each background-corrected with DynamicBackgroundExtraction, registered and combined into an RGB image in in PixInsight.  The RGB was processed with background neutralization, colour calibration, histogram stretch, and saturation adjustment.  The luminance was processed with Dynamic Background Extraction, deconvolution, histogram stretch and TGV noise. LinearFit and Lab channel Combination were used to match the luminance of the RGB to the L.  The L and RGB images were then registered and the L applied to the RGB using LRGBCombine in PixInsight. HDRMultiscaleTransform was used at 5 and 3 pixel scales on the core of the galaxy, followed by Exponential Transpformation on the same region.  Contrast and saturation were adjusted using curves.  Image scale is about 1.1 arc sec per pixel.