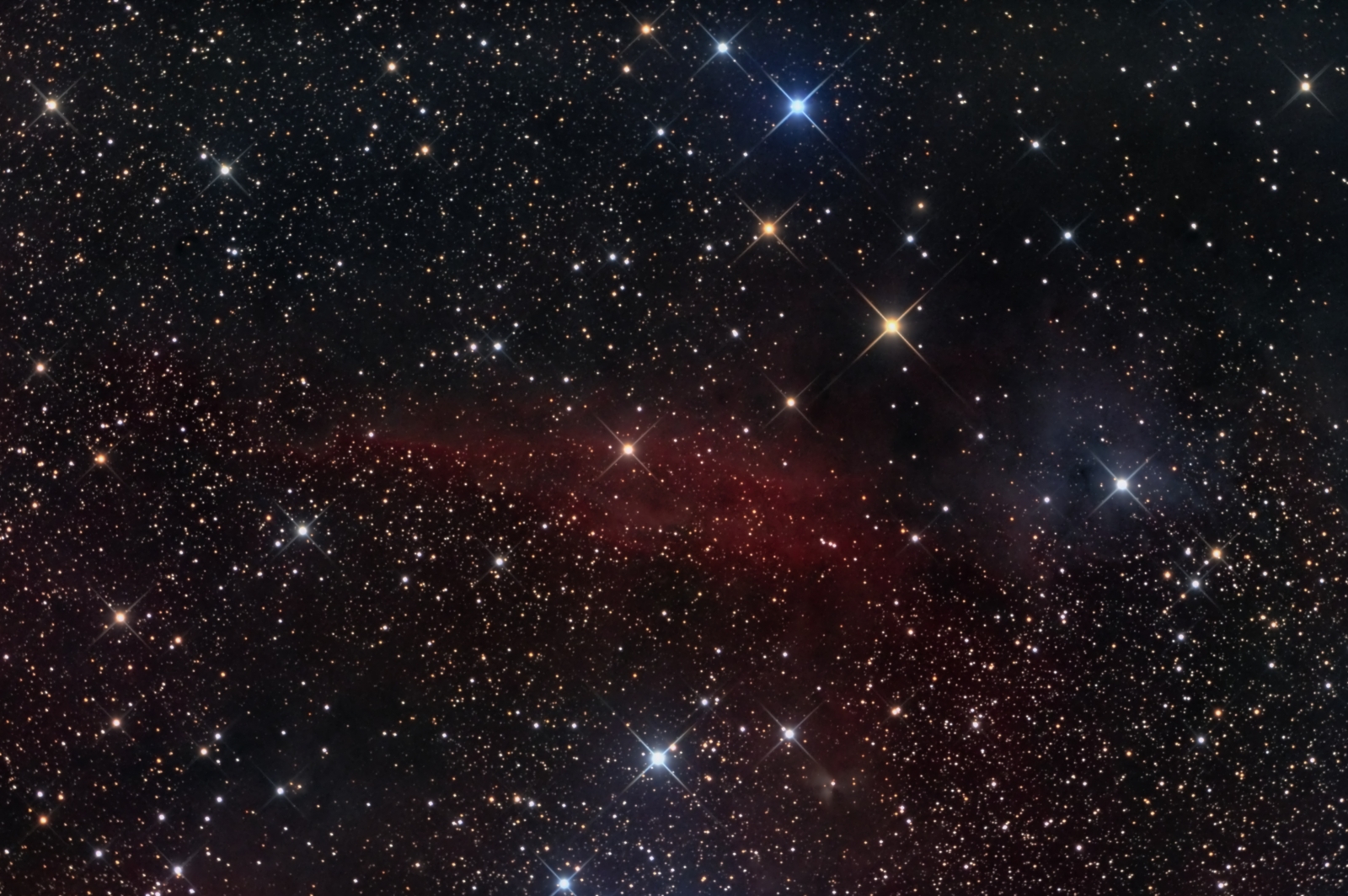 This image shows Sh2-150, the elongated red object, and vdB-154, the blue object at right.  (The abbreviation “vdB” refers to the van den Bergh catalogue of 159 reflection nebulae.)  I captured more than 24 hours of light from this object and it is still dim!  Sh2-150 lies about 2900 light years away in the constellation Cepheus.  I am not sure whether vdB-154 lies at the same distance, because there was very little information available about either object.  There is also a fan-shaped reflection nebula in the faint red glow near the bottom, right of centre.  I learned from my reddit-friend ‘spastrophoto’ that it carries the designation RNO142. The RNO catalog is a list of 170 Red and Nebulous Objects in Dark Clouds compiled in 1980 by Martin Cohen and published in the Astronomical Journal.  Emission nebula glow red due to energy released from excited hydrogen atoms.  The energy is absorbed as infrared light from nearby stars.  Reflection nebula don’t emit light.  As their name suggests, they reflect the light of stars near them.  Emission nebulae tend to be blue or whitish.

Acquisition with TheSkyX.  Focusing with FocusMax4.  All pre-processing and processing in PixInsight.  SBIG STL-11000 with Baader LRGB and Ha filters.  10″ ASA @ f/6.8 on a Paramount MX.  Guiding with SV-80 80 mm f/6 refractor and cameras Remote Guide Head.  Imaging runs were scripted using CCDCommander.   No moon for LRGB, near first quarter for H-alpha.  Transparency and seeing  average for R, G and B and Ha and excellent for L.  Acquired from my SkyShed in Guelph, ON.

R, G and B were combined, and RGB, L and Ha were background corrected with DBE.  The NB-RGB Combine script was used to combine the Ha and RGB data (Ha scale of 1.2).  The resulting HaRGB file was processed with colour calibration, HistogramTransformation, ACDNR (small scale), another HistogramTransformation, and a curve to boost contrast and saturation.