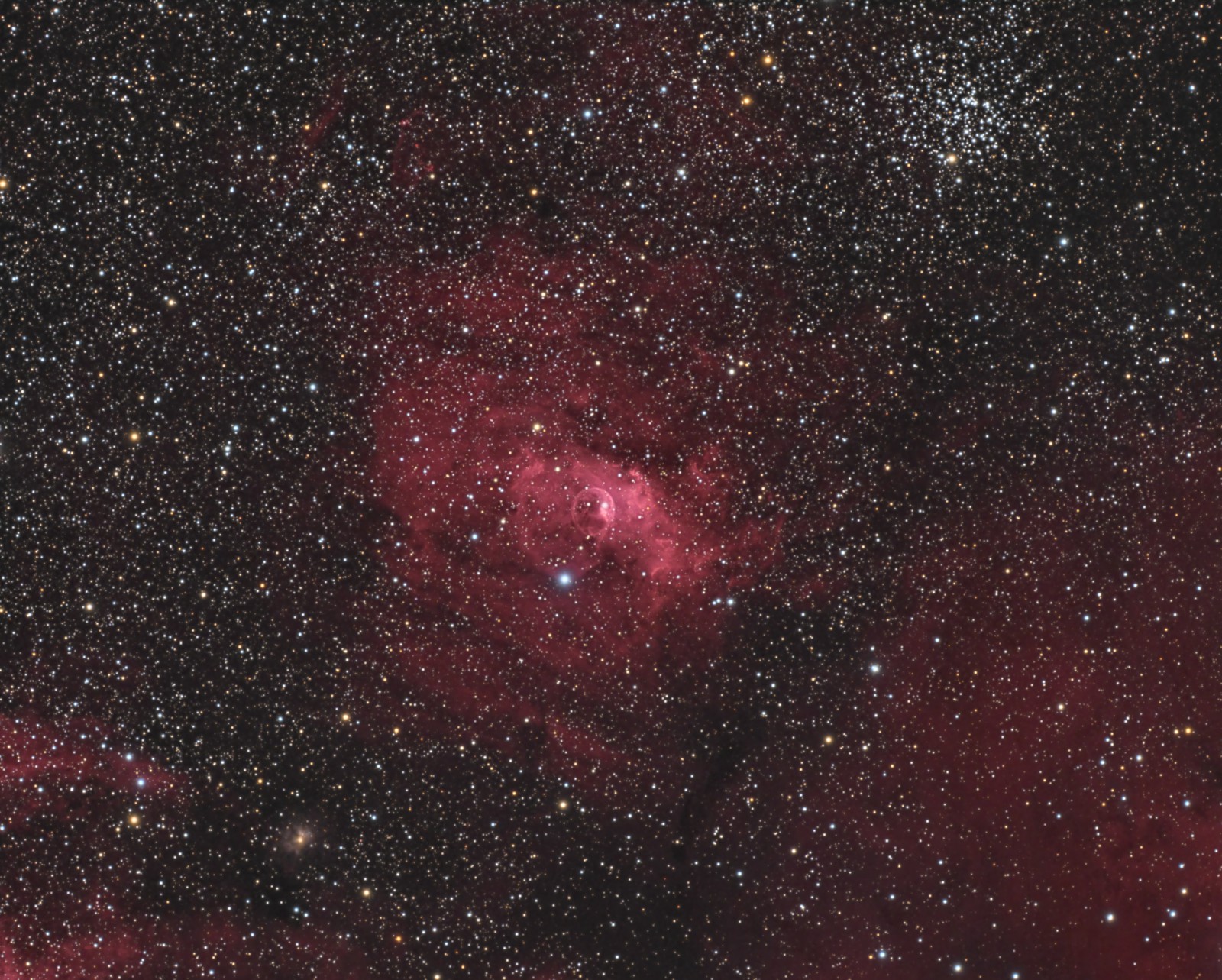 The Bubble Nebula (NGC 7635) lies in Cassiopeia, well placed for imaging in late summer and autumn from my locale. This cosmic bubble’s glows is mainly due to excited atoms of hydrogen. This accounts for the mainly red hues of the nebula in natural-colour images of this and other emission nebulae. The Bubble Nebula is powered by the bright star inside the bubble, which is of a known as a Wolf-Rayet star. WR stars emit a lot of particles and energy, enough that they are blowing the bubble seen in this image.  The central star of the bubble is between 7,000-11,000 light years away. I’ve glimpsed the brightest parts of the bubble visually through my 20″ reflector. Photographically it’s one of my favourite objects to image.

As beautiful as the Bubble Nebula is, it is not the only deep-sky object in this image. The open cluster at upper right is M52. It appears in a small telescope like a beautiful splash of stars. Other notable objects in this image include: 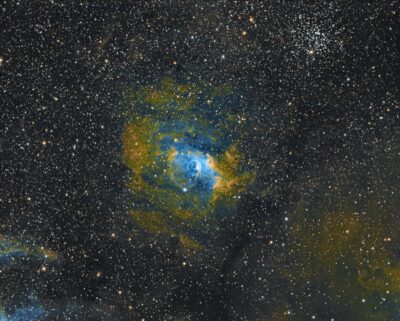 The image at left shows the Bubble in tone-mapped (i.e. false) colours made using sulfur, hydrogen and oxygen filters mapped to red, green and blue. This palette reveals some of the chemistry of this dynamic region of space.

Data Reduction and Initial Processing
Preprocessing: The WeightedBatchPreProcessing script was used to create narrow band master frames (from the mono camera) and a RGB master frame (from the one-shot colour camera).

Colour
Colour Balancing:  Colour of the RGB master was balanced with PhotometricColorCalibration.

Creation of SynthL:  A synthetic Luminance channel was created from the narrowband masters by averaging using ImageIntegration with no sigma clipping, weighted for noise.

Deconvolution:  A star mask was made from the SynthL master to use as a Local Deringing Support Image. A copy of the image was stretched to use as a range mask. Deconvolution was applied (100 iterations, regularized Richardson-Lucy, external PSF made using the PSFImage script; Global dark deringing = 0.03).

Additional Processing
Nonlinear Noise Reduction: TGVDenoise was used in L*a*b* mode to reduce noise with a mask used to target the background areas and protect the stars and nebula (max. 1,000 iterations and convergence selected for both lightness and chrominance).

Sharpening: MultiscaleLinearTransform was used to sharpen Layers 2 and 3 with strengths of 0.1 and 0.08, respectively. A mask was used to select only bright nebular features for sharpening.

Final Steps: Background, nebula and star brightness, contrast, and colour saturation were adjusted in several iterations using CurvesTransformation with masks as required. The DarkStructureEnhance script was run with 0.1 for the Amount. ICCProfileTransformation (sRGB IEC61966-2.1; Relative Colorimetric with black point compensation) was applied prior to saving in jpg format.