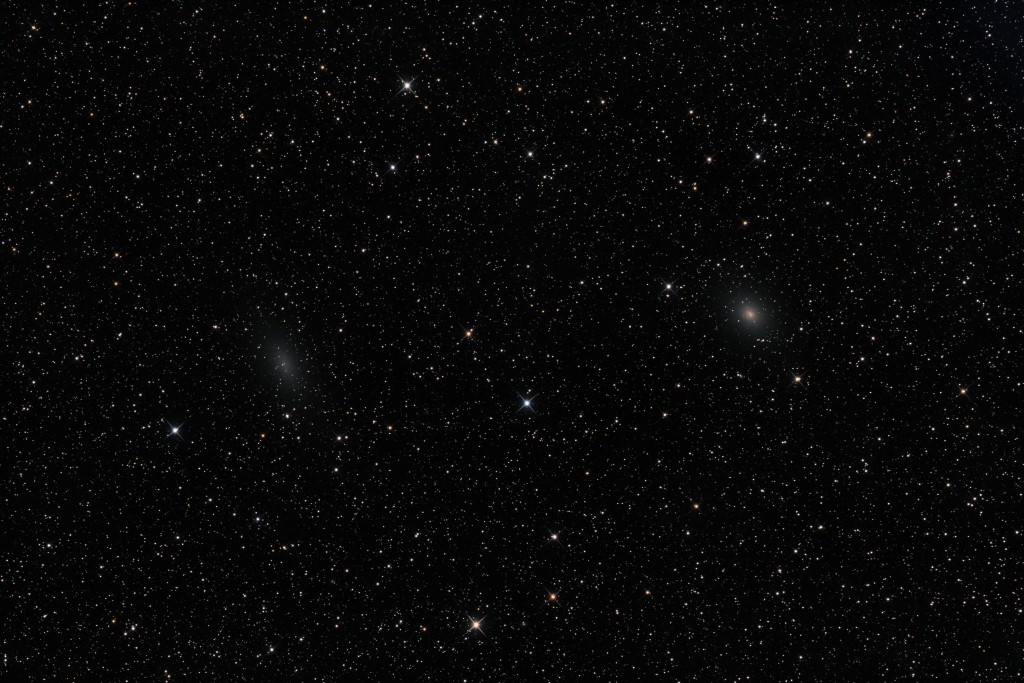 Sir Patrick Moore died at the age of 89 on December 9.  He was a well known figure around astronomy circles, and more widely for his popular and long running BBC TV show “The Sky at Night.”  I decided to try to shoot something in his honour the next chance I had.  The next clear night was December 11, and I selected 2 galaxies as targets, both from the Caldwell Catalogue of deep sky objects.  This catalogue was compiled by Moore, and named after his mother’s maiden name.  It lists 109 bright deep sky objects — nebulae, galaxies and star clusters — that are not included in the Messier catalogue.  I didn’t get very far that night (read on), but came back later and finished it up.  The two prominent galaxies in this image are Caldwell 17 (Left) and Caldwell 18 (Right), also known as NGC147 and NGC185, respectively.  There are many, many more galaxies in this shot; I hope you enjoy cruising through the star field.

“Two minutes of silence,” refers to a single 2-minute exposure, the only data that I kept from the first night I worked on this image.  I had one problem after another, including clouds and frost somewhere in my optical system.  But I figured it all out, it cleared, I focused, and got the first 2 minute frame.  Then it clouded over for good.  A couple days later it was clear again so I did a 3-hour imaging run and produced the colour image shown in this post.

The LRGB file produced in MaximDL was processed in PixInsight with DynamicBackgroundExtraction, colour calibration, histogram stretch, ACDNR (small scale), histogram stretch, curve, saturation.  The image was then saved as a 16-bit FIT file and opened in MaximDL where the red channel was realigned and some artifacts on the stars were fixed.  Final curve was applied to darken the background and increase star colour.  Image scale is about 2 arcsec per pixel for this camera/telescope combination.