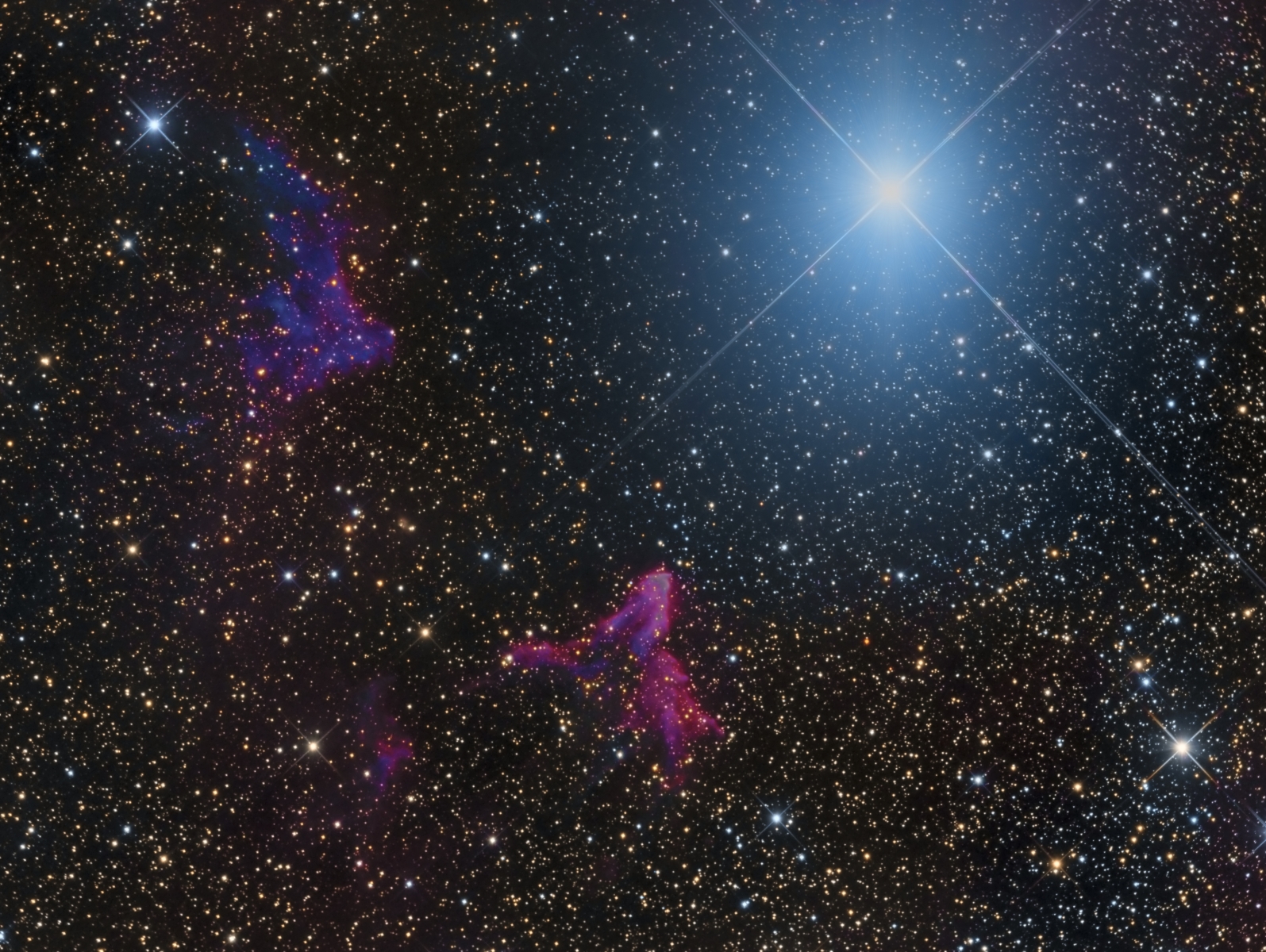 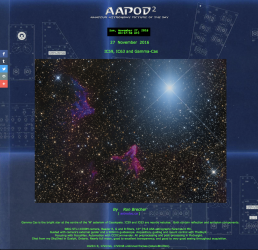 In the autumn sky at dusk, Cassiopeia the Queen is low in the northeast, looking like a ‘W’ tipped to the left. The centre star is gamma Cassiopeia (γ-Cas), a very bright star easily visible to the naked eye. Within 3 or 4 light years from this star, and possibly originatingfrom its dust and gas, lie faint nebulae IC59 (upper left) and IC63 (bottom centre). Both emit red light from hydrogen electrons excited by energy from γ-Cas. Both also contain blue features that shine due to γ-Cas’ reflected light.  γ-Cas is much bigger than the Sun, about 17 times as massive and with ten times the diameter. Because of this, it radiates about 34,000 times as much energy as the Sun. It is pretty close, compared to my usual targets, at only 550 light years away.  The brightness of γ-Cas changes unpredictably; it is a type of variable star known as an “eruptive variable.”

If you look about halfway between IC59 and IC63 you will see a small peach-coloured nebulous patch. My friend Rick Huziak, sent me information about the object. It is catalogued as Cederblad 4a (Ced 4a), and has various other identifiers in other catalogues. It was discovered by Cederblad in 1946. What is interesting is that it is described as various different types of object: galactic nebula, HII region, and even open cluster. You can find more information at the SIMBAD website.

It certainly was a challenge to keep γ-Cas from overwhelming the comparatively faint nebulae. Making it even more challenging, I acquired the data on the nights of September 13 and 14, under a nearly full Moon.

Reducing star halo: A large scale mask was made that protected everything except the halo around γ-Cas.  The mask was heavily blurred to ensure smooth transitions. The curve tool was used to reduce the brightness of the halo, with the greatest reductions near the centre.

MultiscaleLinearTransform was applied to sharpen the brightest parts of the nebula (bias +0.03 for layers 2 and 3), protecting other areas with a mask.

Background, stars and nebula brightness, contrast and saturation were adjusted in several iterations using Curves with masks as required. Great care was taken to protect γ-Cas from getting blown out or interfering with the view of the nebulae.