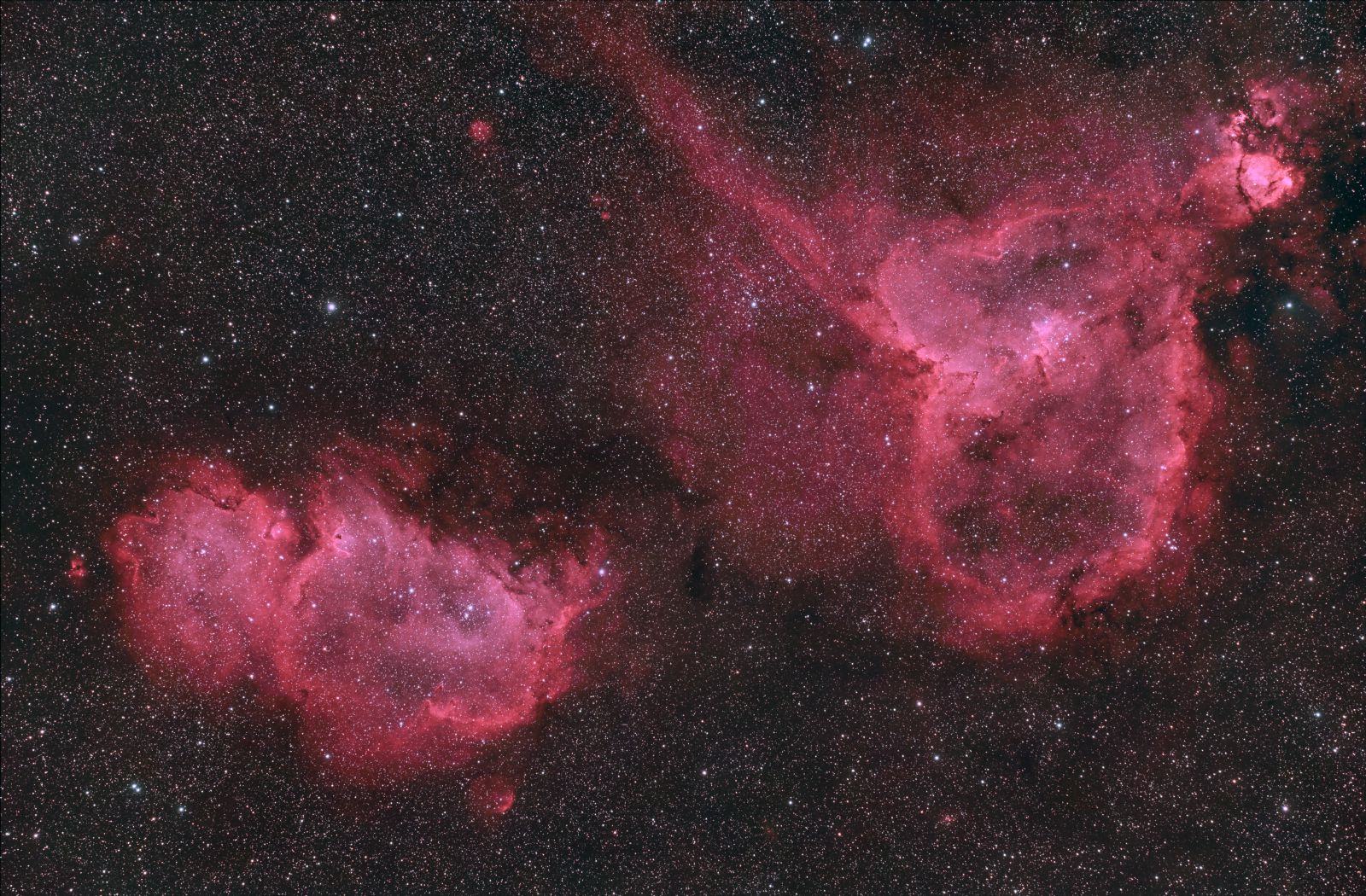 The Heart Nebula (upper right; IC 1805, Sh2-190), and Soul Nebula (lower left; IC 1848, Westerhout 5, LBN 667, Sh2-199) are large clouds of glowing gas. Both are in Cassiopeia and about 7,500 light years away in the Perseus arm of the Milky Way galaxy. The Heart Nebula is about 165 light years in diameter, with the Soul being a little smaller. To the upper right of the image is the Fishhead Nebula (IC 1795, NGC 896), while the open cluster Melotte 15 lies at the centre of the Heart nebula. That cluster is responsible for causing the hydrogen in this region to glow.

In addition to the main subjects of the image, there are numerous other catalogued objects in this shot that are interesting in their own right. I prepared an annotated image to help you navigate this busy field. IC 1871 is the little patch of detached nebuolosity just left of IC 1848, and it shows some structure on close inspection. Sh2-198 appears below the Soul nebula, with tiny Sh2-191 near the bottom of the image, below the Heart nebula. Sharpless 195 and 197 are hard to see, but present, in the bottom centre of this image. Sharpless 192, 193, 194 and 196 all lie to the left of the Heart nebula, just left of top centre of this image.

Contrast Enhancement: LocalHistogramEqualization was applied twice (scale of 54 with strength 1.0; then scale of 150 with strength 0.5) using a mask to protect stars and low-signal regions of the image. The mask was a stretched version of the Lightness image with stars removed using Starnet++.

Final Steps: Background, nebula and star brightness, contrast, colour saturation were adjusted in several iterations using CurvesTransformation with masks as required. Hue was adjusted using the following expression in PixelMath without rescaling, with a star mask used to protect the stars:

The DarkStructureEnhance script was applied with a strength of 0.20. The image was rescaled to its original scale of 2.6″/pixel. ICCProfileTransformation (sRGB IEC61966-2.1; Relative Colorimetric with black point compensation) was applied prior to saving as a jpg. And if you read all the way to here, congratulations. You can see the full resolution Drizzled version (1.3″ per pixel), by sending me a comment asking for it!