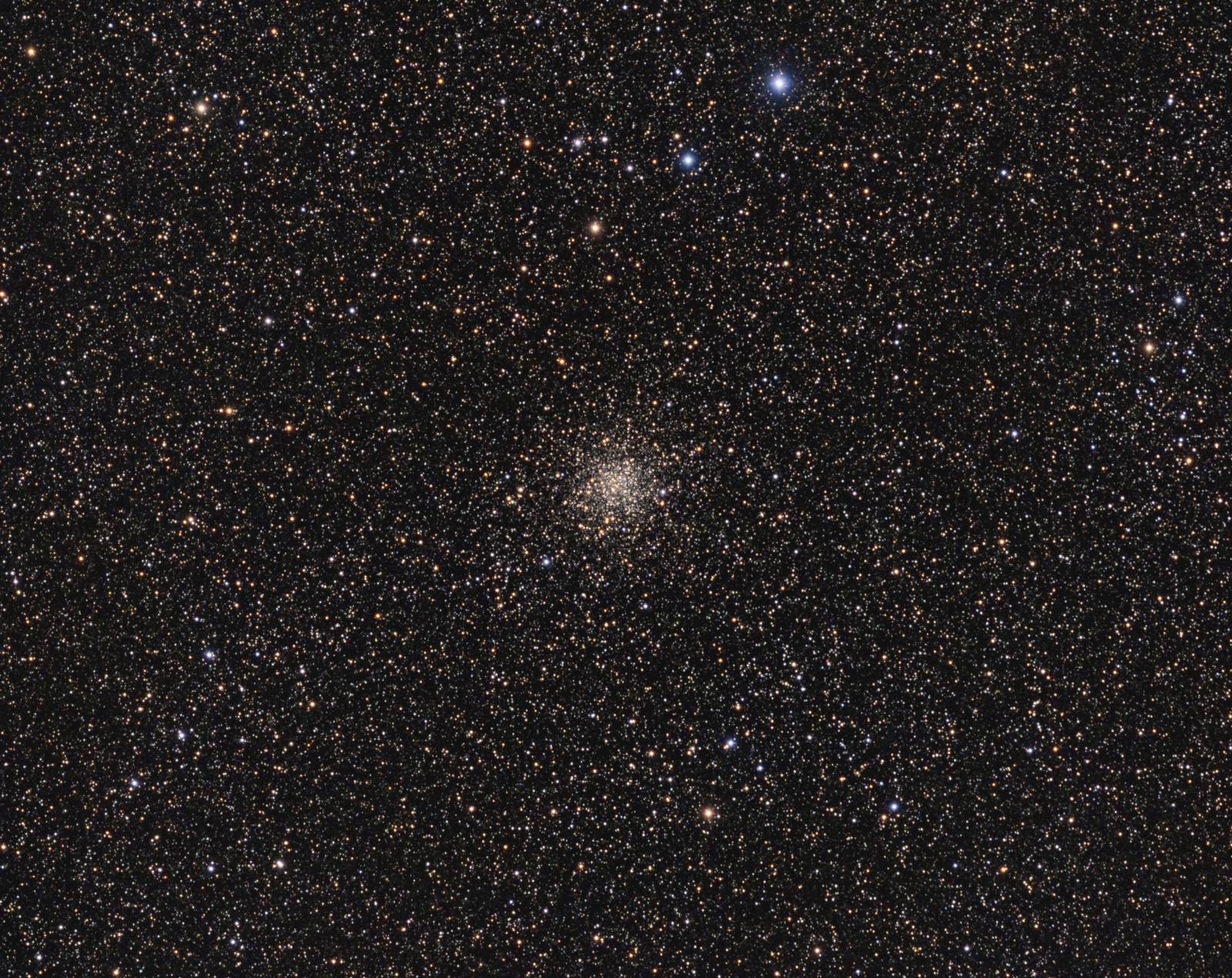 The object at the centre of this image is M71, a globular cluster located about 12,000 light years away. It is about 27 light years across, and relatively young at around 9 or 10 billion years old. It has the mass of around 17,000 suns and the luminosity (basically, brightness) of around 13,000 suns. For a long time, M71 was misclassified as an open cluster.

Open clusters reside in the spiral arms of the Milky Way (and other galaxies) and are also sometimes called “galactic clusters.”  They usually contain a few dozen to a couple thousand stars. In contrast, GCs contain hundreds of thousands to millions of stars, are usually quite densely packed, and form a halo around the Milky Way galaxy (other galaxies also have GCs). Globular clusters reside in a halo outside the main body of their host galaxy.

Although it is rather loosely packed, M71 looks clearly like a globular cluster through an eyepiece. However, images can make it look more like a rich open cluster (e.g. M11).

Sky-Watcher Esprit 150 f/7 refractor, QHY 16200-A camera, Optolong R, G and B filters, Paramount MX. Acquisition with TheSkyX unguided. Focused with FocusMax 4. Automation with CCDCommander. All pre-processing and processing in PixInsight. Acquired from my SkyShed in Guelph. No Moon, average transparency and fair  to average seeing. Data acquired June 26, 2018.

Data Reduction and Cleanup
The BatchPreProcessing script was used to perform calibration, cosmetic correction and registration of all frames. ImageIntegration was used to make the R, G and B masters. DynamicCrop was used to crop all the masters identically. DynamicBackgroundExtraction was applied to each master.

Linear Noise Reduction: MultiscaleLinearTransform was used to reduce noise in the SynthL image. An internal mask was used, with layer settings for threshold and strength as follows:Layer 1: 3, 0.5   Layer 2: 2, 0.3  Layer 3: 2, 0.1.

Stretching:  MaskedStretch, followed by HistogramTransformation, was applied to the SynthL to make a pleasing, bright image. Use of MaskedStretch prevented core burnout.

RGB Creation
Creation and cleanup: ChannelCombination was used to make a color image from the R, G and B masters. The RGB image was processed with PhotometricColorCalibration using a small preview of background sky as the background reference.

Linear Noise Reduction:  MultiscaleLinearTransform was used to reduce noise in the RGB image. An internal mask was used, with layer settings for threshold and strength as follows: Layer 1: 3, 0.6   Layer 2: 2, 0.4  Layer 3: 2, 0.25.

Stretching:  MaskedStretch, followed by HistogramTransformation, was applied to the RGB image to make a pleasing, bright image. Use of MaskedStretch prevented core burnout.

Additional Processing
Noise Reduction and Re-Stretch: TGVDenoise was applied in L*a*b* mode (1000 iterations with convergence = 0.004) using a range mask used to protect high signal areas. HistogramTransformation was used to raise the black point (but with no clipping).