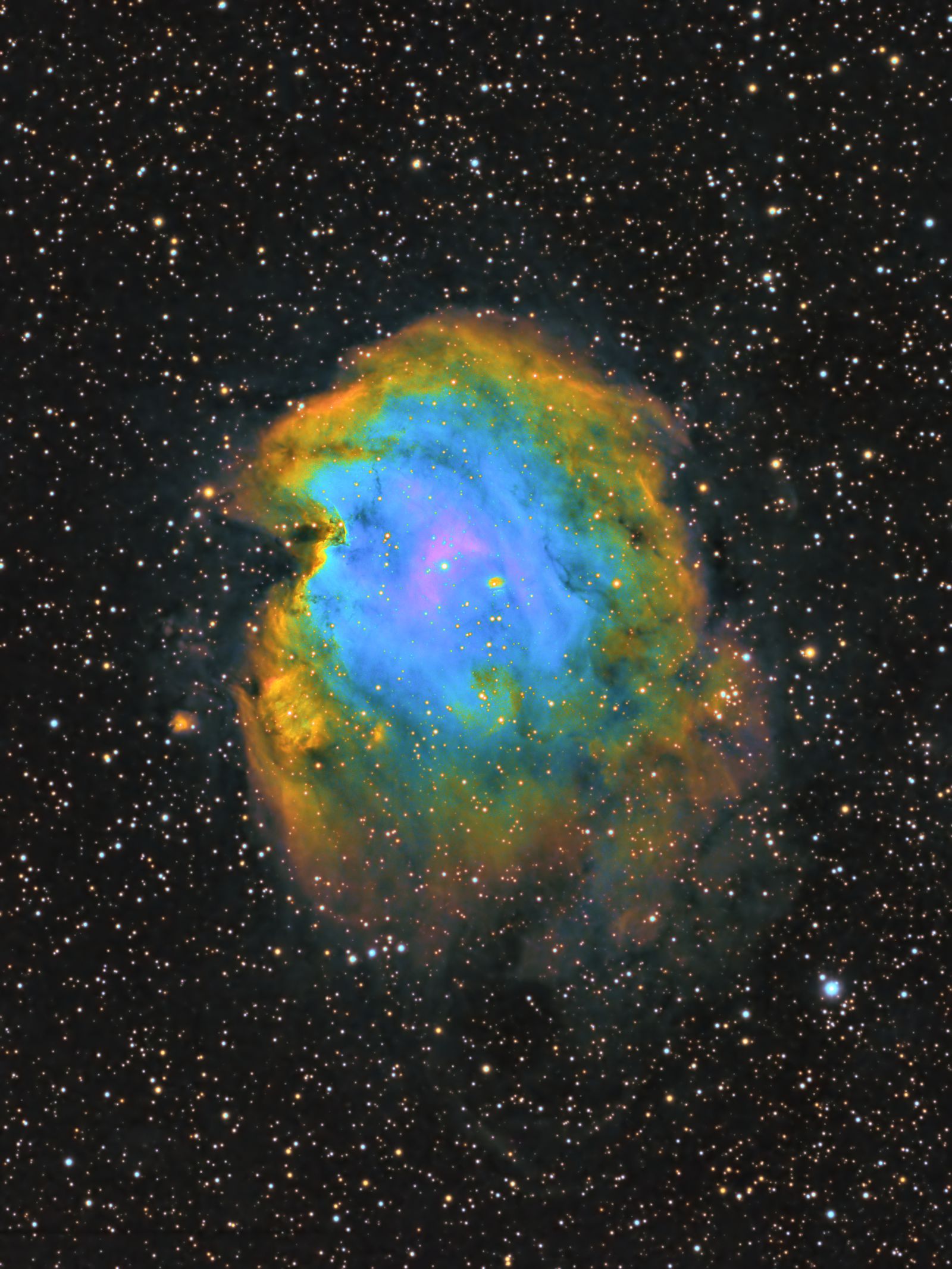 The Monkey Head Nebula (NGC 2174; Sh2-252) surrounds open star cluster NGC 2175 and lies about 6,400-7,200 light years from us. The nebula is a stellar nursery, where new stars are forming. In addition to the reddish emission nebula, it contains bluish reflection components. One is at lower right of the nebula, and another is around the brightest star inside the nebula. This field is located in the northern part of Orion, just below the feet of Gemini. This image was taken through narrowband filters that passed emissions from sulfur, hydrogen and oxygen to the camera. This false-colour image shows some of the chemistry of what is going on within the nebula. I have also separately posted a natural-looking broadband image. Although I find the natural look more aesthetically pleasing, the narrowband palette gives us a look at how the gases vary throughout the object, and give it a more three-dimensional appearance. I used the star colours from the broadband image to make the stars look more natural in this narrowband view.

Being set in the winter Milky Way, the image is full of stars that show a range of colours varying from orange-red to blue-white based on their temperature (blue is hottest; red coolest).

Tekkies:
Acquisition, focusing, and control of Paramount MX mount, with TheSkyX. Focus with Optec DirectSync motor and controller. Guideing with OAG and QHY5III-290 camera. Automation with CCDCommander. Equipment control with PrimaLuce Labs Eagle 3 Pro computer. All pre-processing and processing in PixInsight. Acquired from my SkyShed in Guelph. Average transparency and seeing. Data acquired March 2-14, 2021 in a mostly moonless sky.

Data Reduction and Cleanup
The WeightedBatchPreProcessing script was used to perform calibration, cosmetic correction , registration and integration of all frames.

Deconvolution:  A star mask was made to use as a Local Deringing Support image. A copy of the  luminance image was stretched to use as a range mask. Deconvolution was applied (100 iterations, regularized Richardson-Lucy, external PSF made using PSFImage script with 50 stars).

Sharpening: MultiscaleLinearTransform was used to sharpen Layers 2 and 3 with strengths of 0.4 and 0.1, respectively. A mask was used to limit sharpening to high-signal areas and to protect the stars and background regions.

Hue Adjustment: The green tones were transformed towards blue, and yellows towards red, using CurvesTransformation’s Hue adjustment. SCNR was applied with a strength of 0.20 through a Green mask generated with the ColorMask script.

Final Steps: Background, nebula and star brightness, contrast, saturation and hue were adjusted in several iterations using CurvesTransformation with masks as required. The DarkStructureEnhance script was applied with a strength of 0.25. ICCProfileTransformation (sRGB IEC61966-2.1; Relative Colorimetric with black point compensation) was applied prior to saving as a jpg.