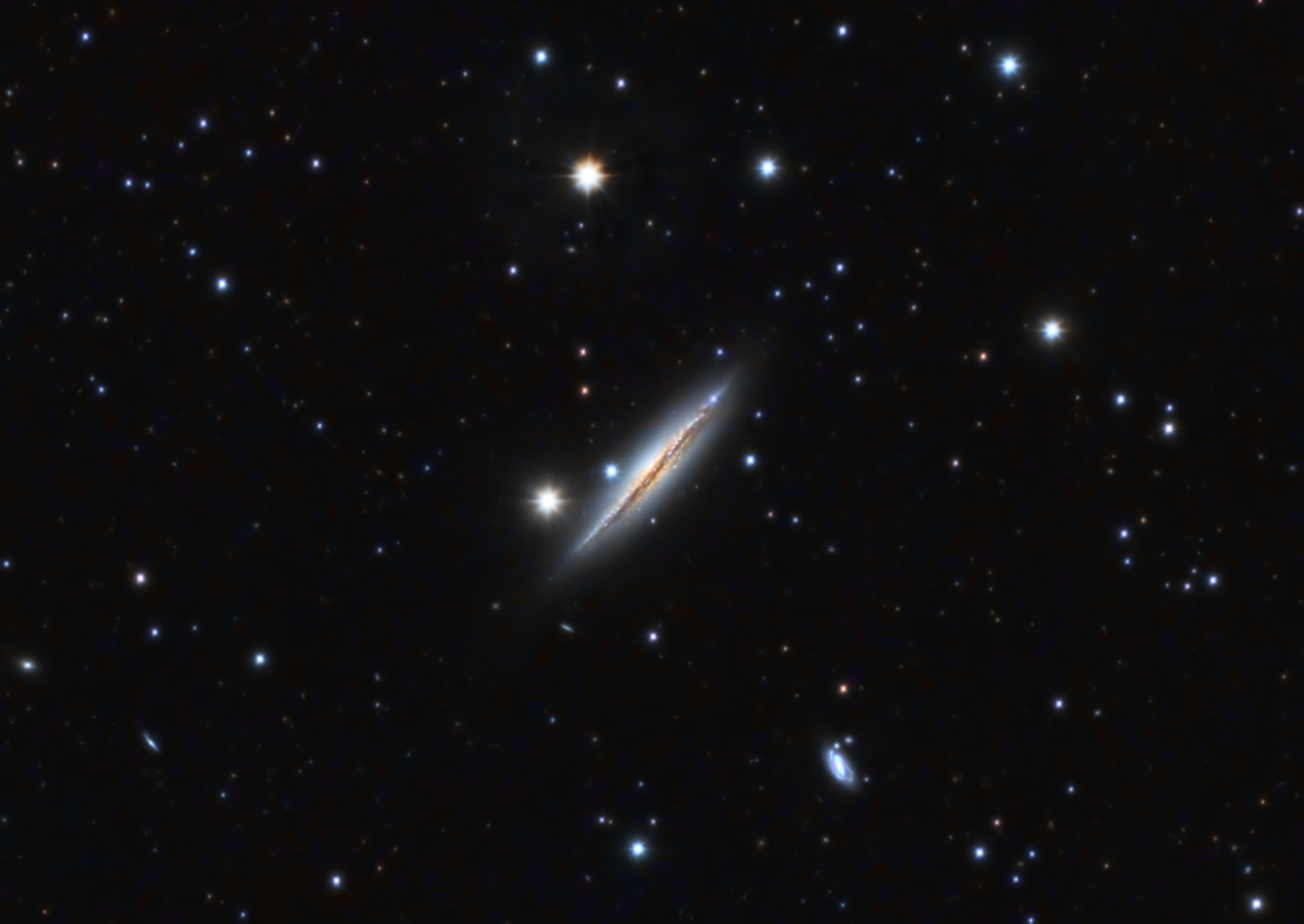 This image of NGC 4217 proves that it is most definitely galaxy season for deep-sky imaging! I came across this pretty little barred-spiral galaxy while imaging much larger M106.  NGC 4217 tends to be overlooked as a small smudge in the field with M106, or cropped out of the frame altogether. NGC 4217 has a really interesting, twisted dark lane, and also shows some knots of star clusters and nebulae. It is located about 60 million light years away in Canes Venatici. Hubble shots show intricate structures in the dust filaments, but my little earth-based telescopes only begin to hint at them.  There are a few other galaxies in this field. NGC 4226 is to lower right of centre. Much fainter PGC213956 is below the bottm tip of NGC 4217.  Two more PGC galaxies are near the left side of the image; one looks like a splinter and the other like a fuzzy slightly elongated star.

Tekkies:
Acquisition, focusing, guiding and control of Paramount MX mount with TheSkyX. Focus with Optec DirectSync motor and controller. Automation with CCDCommander. Equipment control with PrimaLuce Labs Eagle 3 Pro computer. All pre-processing and processing in PixInsight. Acquired from my SkyShed in Guelph. Average or better transparency and seeing. Data acquired March 4-21, 2020 under a mainly moonless sky.

Image scale 1.15 arcsec per pixel (based on Luminance)

Data Reduction and Initial Processing
Preprocessing: The WeightedBatchPreProcessing script was used to create the Luminance master frames (from the mono camera) and Drizzle files (from the one-shot colour camera). DrizzleInegration with CFA Drizzle was used to integrate the OSC drizzle files with 2x scaling.

Colour
Colour Balancing:  Colour of the RGB master was balanced with PhotometricColorCalibration.

Luminance
Deconvolution:  A star mask was made from the Luminance master to use as a Local Deringing Support Image. A copy of the image was stretched to use as a range mask. Deconvolution was applied (100 iterations, regularized Richardson-Lucy, external PSF made using the PSFImage script; Global dark deringing = 0.02).

Combining Luminance and Colour Images
Creation of LRGB: The Luminance was applied to the RGB image using LRGBCombination with default settings.

Sharpening: MultiscaleLinearTransform was used to sharpen Layers 2 and 3 with strengths of 0.3 and 0.08, respectively. A mask was used to select only bright features  in the galaxy for sharpening.