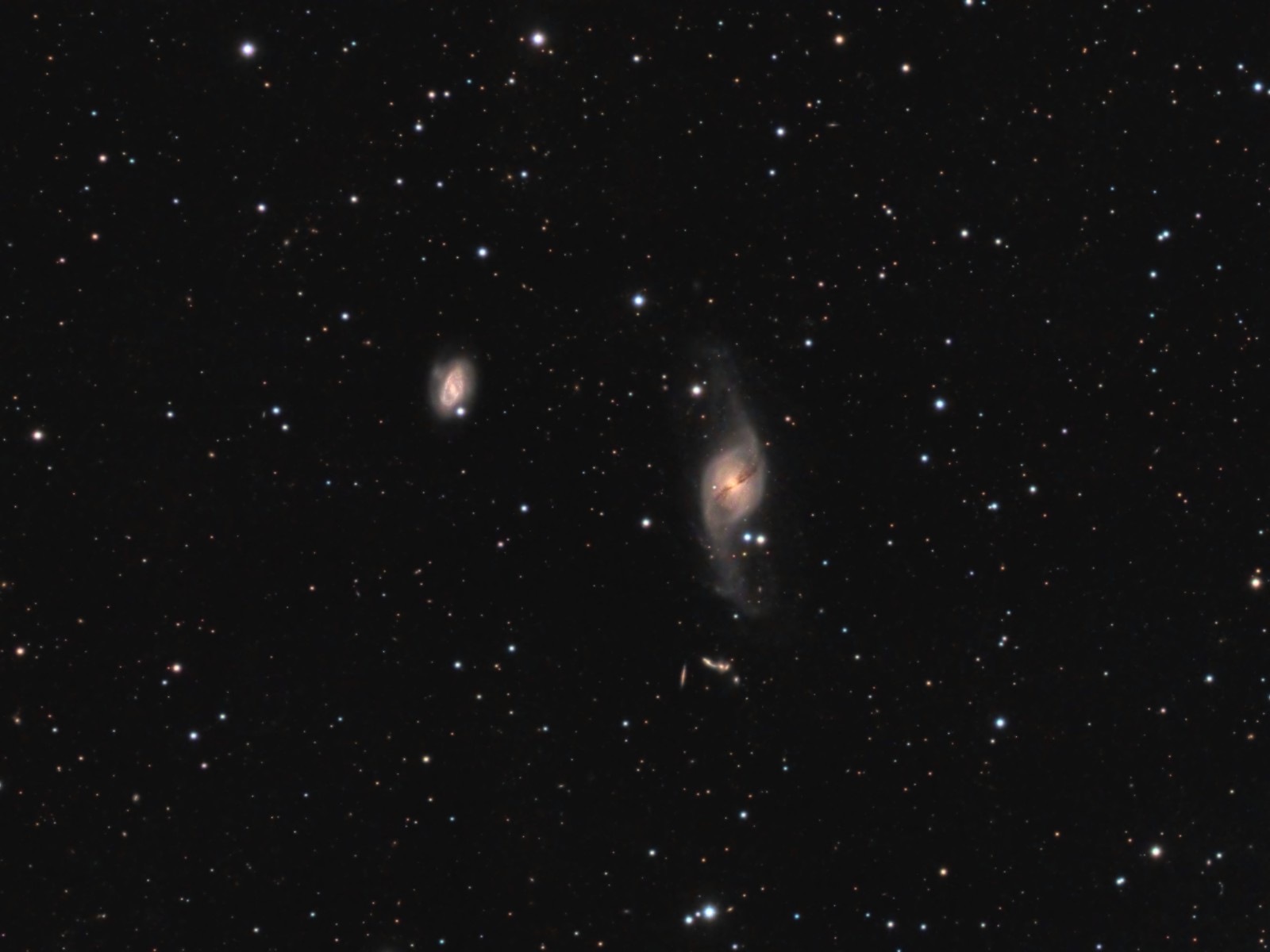 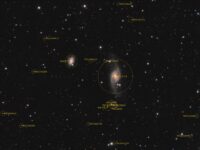 NGC 3718 hangs like a Christmas ornament near the centre of this image. It is not known whether it is a lenticular (lens-shaped) or spiral galaxy. Its warped shape may be due to a gravitational interaction with NGC 3729, which is above-left of centre in the image. At about 150 million light years, NGC 3729 is about three times further from us than NGC 3718, at 52 million light years.  The little group of galaxies below NGC 3718 in this image is Hickson Compact Group 56 (H56). Some more familiar Hickson Compact Groups are H44 and H92 (Stephan’s Quintet). H56 lies about 425 million light years from us.

Just stop and think about that for a minute. As you look at H56, you’re looking at the light-echo of a photon that travelled 425 million years before hitting a pixel in my camera. That’s just crazy! The annotated image shows some of the many other galaxies in the field, some of which are even further away. Click to see it full size.

Tekkies:
Acquisition, focusing, guiding and control of Paramount MX mount with TheSkyX. Focus with Optec DirectSync motor and controller. Automation with CCDCommander. Equipment control with PrimaLuce Labs Eagle 3 Pro computer. All pre-processing and processing in PixInsight. Acquired from my SkyShed in Guelph. No moon, average or better transparency, and average seeing. Data acquired April 2 – May 16, 2020.

Colour
Channel Registration:  To mitigate slight chromatic aberration in the corners of the field, the colour channels of the RGB master were extracted with ChannelExtraction and aligned with StarAlignment, using Thin Plate Splines with Distortion Correction and the green channel as the reference frame. The registered colour channels were recombined with ChannelCombination.

Stare Core Repair: A 2x up-scaled version of the non-drizzled RGB master  (called “non_drizzle”) was used to replace artifacts in star cores in the drizzled master. This was achieved with the PixelMath expression iif($T[0]<0.001, non_drizzle, $T). The HSV Repaired Separation Script was then used to extract, repair and replace the HSV channels.

Stretching: HistogramTransformation was applied to make a pleasing, bright image, with background set to an intensity of approximately 0.06.

Lightness
Deconvolution:  StarMask was applied with default settings to produce a Local Deringing Support Image. A clone of the image was stretched  with HistogramTransformation and Curves in order to use it as a deconvolution mask. Deconvolution was applied (80 iterations, regularized Richardson-Lucy, external PSF made using PSFImage script with about 20 stars).

Stretching:  HistogramTransformation was applied to make a pleasing, bright image, with background set to an intensity of approximately 0.06.

Sharpening:  The galaxies were sharpened with a pass of MultiscaleLinearTransform (bias +0.07 on 2nd and 3rd layers).

Final Steps: Galaxies (overall and dust lanes), background and star brightness, contrast, and colour saturation were adjusted in several iterations using CurvesTransformation  and SCNR with masks as required. ICCProfileTransformation (sRGB IEC61966-2.1; Relative Colorimetric with black point compensation) was applied prior to saving as a jpg.