Skip to content
Previous Next
NGC2244, The Rosette Nebula 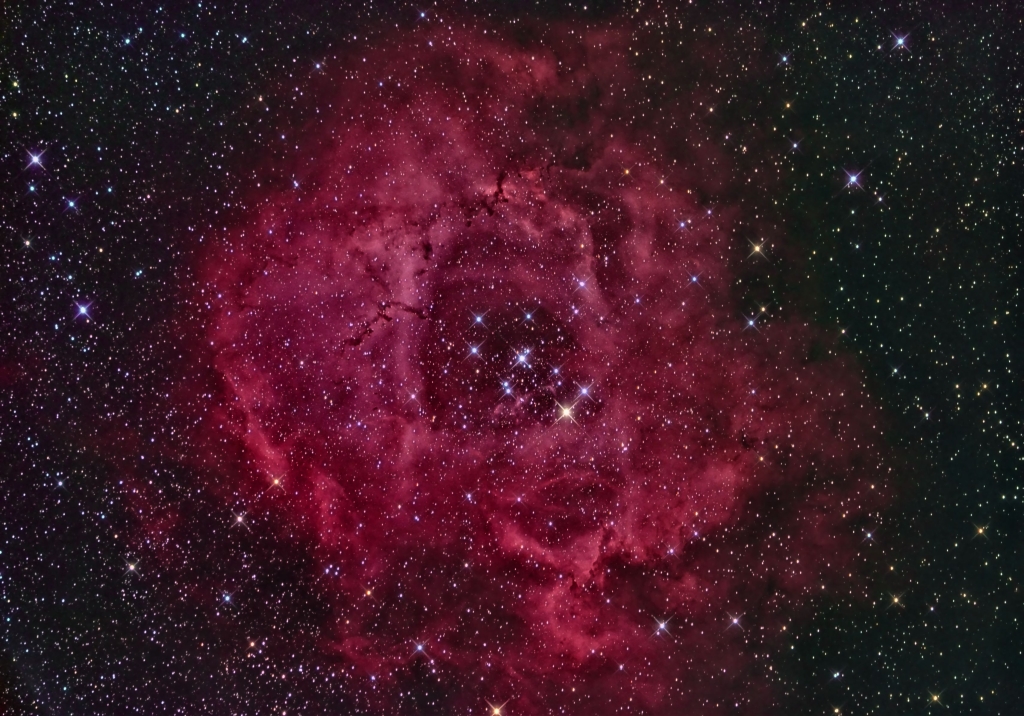 This is the second picture I took on January 14, 2012 – first light night with the new camera (actually first picture night – the camera had been used for test images, but none were distributed broadly). This gorgeous donut is the Rosette Nebula.  It’s very large and diffuse.  I’ve shot it before and been disappointed with the result, but I like this version a lot.  Only 79 minutes on this one, and it is in the most light-polluted part of my sky (badly impacted by the Guelph Auto Mall).  I sent out a test version of this shot last night to a few astrophotographer friends and re-processed based on their feedback (always appreciated). The star cluster NGC2244 is smack dab in the middle of the Rosette.  The nebula itself is a cloud of glowing hydrogen gas that is absorbing invisible infrared star light and emitting it as red light that we can see.  I’ve seen it dimly in my 18×50 binoculars, but this object is just amazing in photos, and is one of my favourites.

I’ve come back to this object many times, most recently in December, 2016.

Ha and LRGB image were created in Maxim-DL using the “Stack” command.  PixInsight was then used as follows onDynamic Background Extraction on the Ha and LRGB images, Colour Balance on LRGB. The cleaned up Ha and RGB images were combined using a script by a PixInsight user named “Silvercup”, based on Vicent Peris’ method (which I used to do manually).  The HaLRGB image was colour balanced, followed by Deconvolution, Stretch, HDRMultiscaleTransform, ACNDR noise reduction (small scale), reset black point,  ACNDR noise reduction (small scale), reset black point, LocalHistogramEqualization, curves, saturation.