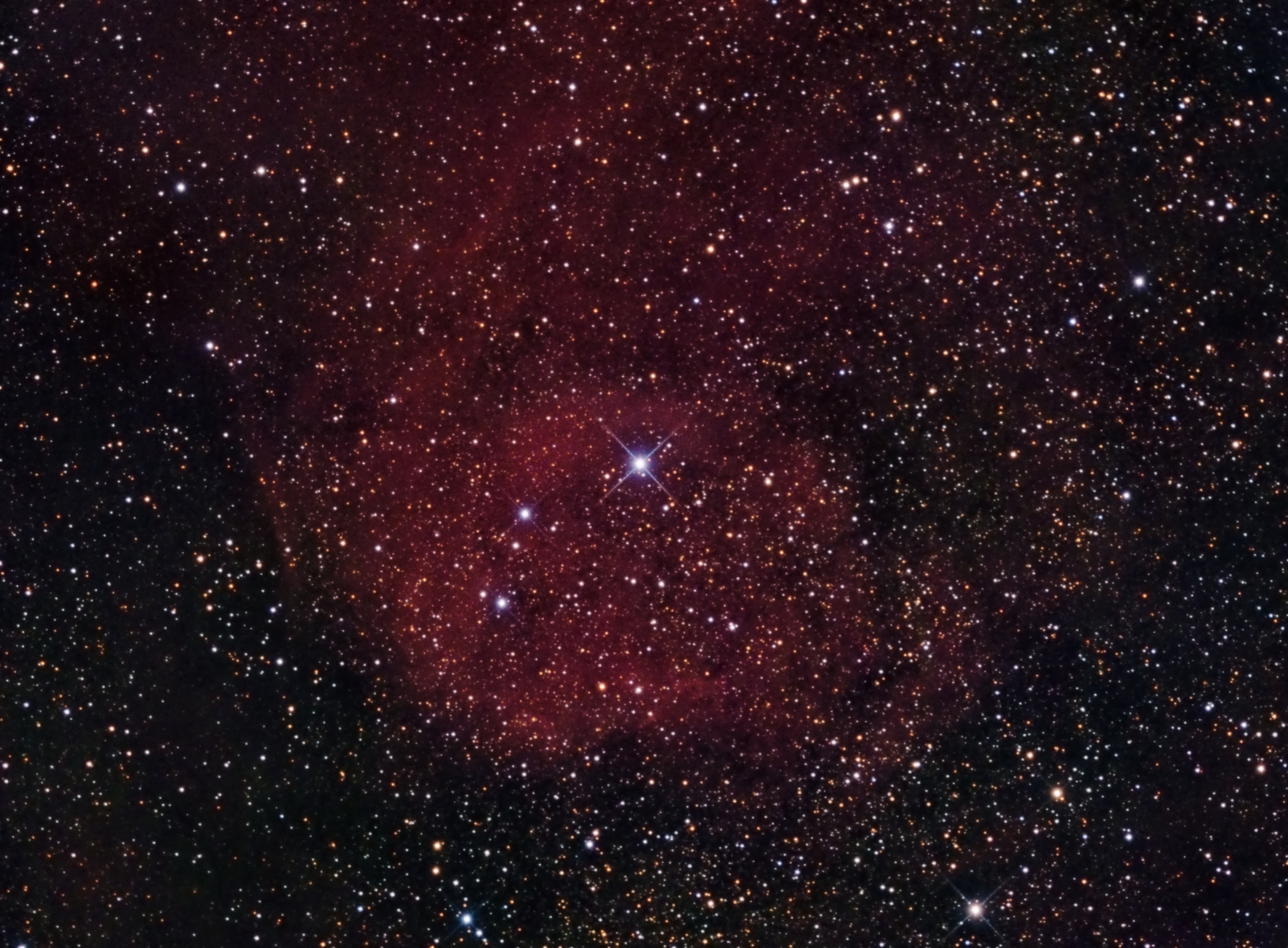 The nebulae in the Sharpless catalogue range from tiny to huge, and from extremely dim to bright. Sh2-46 is is sort of in the middle of the pack; neither very bright nor very dim; and intermediate in size. It lies in Serpens, and is around 2,000 light years away from us. It’s width is about half the Moon’s width. Sh2-46 doesn’t seem to be a very popular imaging target, and I wasn’t able to find many other images or additional information about it. This image blends the typical red, green and blue colour channels with data collected through the deep red Hydrogen-alpha filter.

Tekkies:
SBIG STL-11000M camera, Baader Ha, R, G and B filters, 10″ f/6.8 ASA astrograph, Paramount MX.  Guided with QHY5 guider and 80 mm f/6 Stellar-Vue refractor. Acquisition and guiding with TheSkyX.  Focusing with FocusMax. Automation with CCDCommander. All preprocessing and processing in PixInsight. Shot from my SkyShed in Guelph, Ontario. Nearly full Moon for Ha and no moon for RGB.   Good to average transparency and seeing throughout acquisition.

HaRGB
R, G and B were combined to make an RGB image which was processed with DBE and ColourCalibration.  The NBRGBCombine Script was applied with default settings to produce a linear HaRGB image.  MultiscaleLinearTransform was used to reduce noise in the background areas. HistogramTransformation was applied to make a pleasing yet bright image.

Stretching: HistogramTransformation was applied to make a pleasing yet bright image.  TGVDenoise was applied and the image was stretched again to reset the black point.

1. Equalize RGB channels with RGBWorkingSpace and extract luminance from the HaRGB image.
2. Apply LinearFit using SynthL as the reference.
3. Use ChannelCombination in Lab mode to replace the HaRGB’s luminance with the fitted luminance from step 2.
4. LRGBCombine was then used to make a SynthLHaRGB image.

Final Processing
HistogramTransformation was used to reset the black point and grey point. Then a range mask was produced that allowed used to slightly increase the brightness of the nebula. LocalHistogramEqualization was applied in two passes at scales of 50 and 150 using a mask to protect background and stars. Then overall contrast was increased and saturation and brightness increased slightly with the Curves tool.