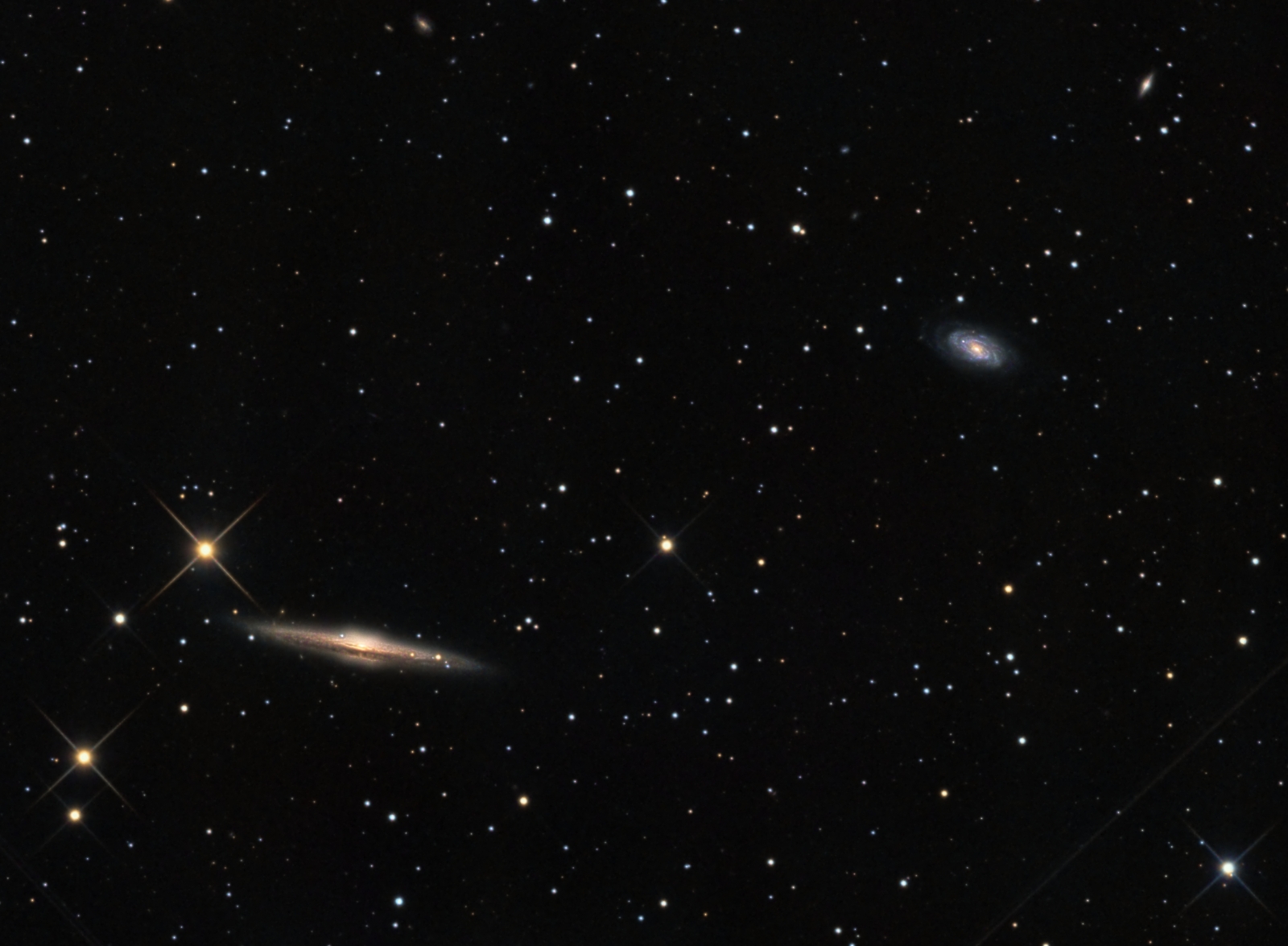 In extreme eastern Virgo lie the two main subjects in this image, NGC5746 (lower left) and NGC5740 (upper right). The two form an interacting galaxy pair within the Virgo cluster and lie about 95 million light years away.

One of the most interesting thing about this pair is how different they appear.  NGC5746 is quite yellowish, and dominated by the central bulge and dust lane that reminds me a lot of NGC891 and NGC4565. NGC5740 shows blue spiral arms with pink nebulae and a yellowish core.

Many other Virgo cluster galaxies are captured in this field, with the most prominent being NGC5738 (top right corner). How many can you spot?

By the way – the diagonal lines at lower left and right are the diffraction spikes from a star so bright that it is easily visible to the naked eye from even a moderately light polluted site. I cropped it out of the picture to avoid distracting attention from the main subjects of the picture.

Tekkies:
SBIG STL-11000M camera, Baader LRGB filters, 10″ f/6.8 ASA astrograph, Paramount MX.  Guided with QHY5 on an 80 mm f/6 refractor.  FocusMax for focusing. CCD Commander to automate the sessions. Acquistion and guiding with TheSkyX. All pre-processing and processing in PixInsight. Shot from my SkyShed in Guelph, Ontario. RGB under moderate moonlight and luminance with no moon. Average to very good transparency and good seeing.

Luminance
Creation and cleanup: An L master was created using ImageIntegration and DrizzleIntegration. The image  was cropped similarly to the RGB master and DBE was applied to remove gradients.

Stretching: HistogramTransformation was applied to make an image with similar brightness to the RGB image. TGVDenoise was applied using an inverted copy of L as a mask, and the image was re-stretched to reset the black point.

Combining SynthL with RGB:
The RGB image was aligned to the L master. LRGBCombine with default settings was used to apply L to the RGB master to make an LRGB image.

Image scale is about 0.55 arcsec per pixel for this camera / telescope combination, since Drizzle processing was used on the luminance channel.