Skip to content
Previous Next
IC 1396 in Narrowband Colour 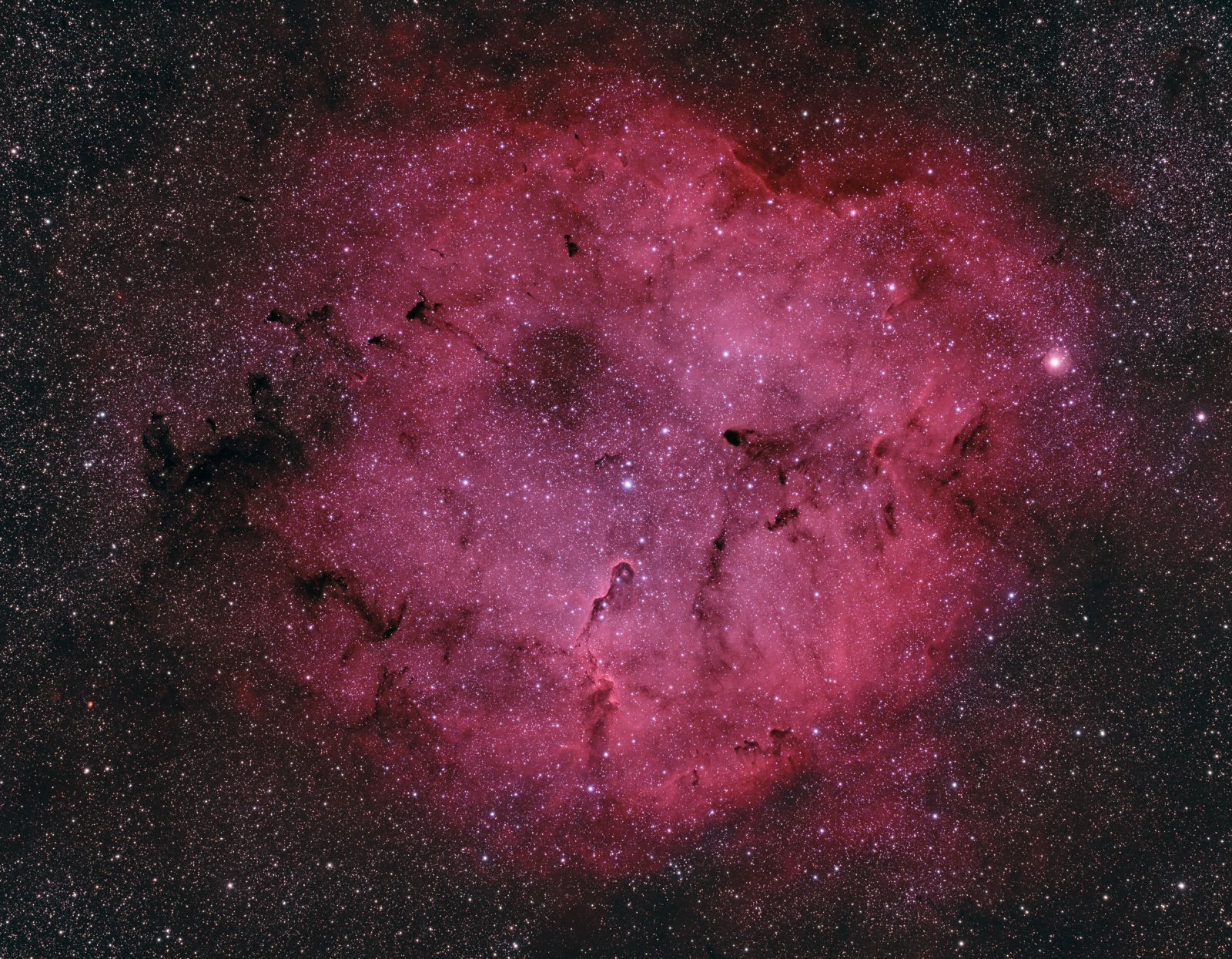 IC 1396 is a large cloud of faintly glowing gas, composed mainly of hydrogen. It is a huge object in the sky, with a diameter more than six times that of the Moon. That’s because it is both relatively close to us (2,400 light years) and big (more than 100 light years across). The energy that makes the nebula’s gas glow comes from the bright star at the centre of the nebula, called HD 206267. Jutting in from the 6 o’clock position is the Elephant’s Trunk Nebula, which features in another image I’ve taken of this object. The Elephant’s Trunk is a star forming region, and there are a number of very young stars — less than 100,000 years old — in its vicinity.  IC 1396 is textured throughout with many dark nebula. It’s hard not to notice Mu Cephei, the brightest star in the image, near upper right. It is about 38,000 times as bright as the Sun. Bring your sunscreen.

Many people prefer these nebulae displayed in greyscale (black & white) images. I usually prepare both. You can find a greyscale version of my 2017 image of this object here. This image was acquired using a narrowband filter – a filter that passes only a few wavelengths of light — along with a colour camera. Since the image doesn’t contain all of the colours of light that stars and nebulae emit, the colours must be “tone mapped,” in other words, selected by me.

Data Reduction and Cleanup
Preprocessing: The BatchPreProcessing script was used to perform calibration, debayering, and registration of all frames. ImageIntegration followed by DrizzleIntegration with the CFA Drizzle option was used to make the master, which was then cropped.

Luminance Extraction:  RGBWorkingSpace was applied to normalize the channels, and the Luminance was extracted for separate processing as described below.

Colour
Colour Balancing:  The colour image was colour balanced with ColorCalibration (note; this did not correct star colours, since this image used a narrowband filter)

Recombining Luminance and RGB
LRGB Combination: The luminance image was applied to the RGB image using LRGBCombine with default settings.

Sharpening: MultiscaleLinearTransform targeting the lightness channel was used to sharpen Layers 2-4 with layers 2 and 3 with strengths of 0.1  and layer 4 having a strength of 0.05. A mask was used to limit sharpening to the regions of the nebula that showed the most detail.

Final Steps: Background, nebula and star brightness, contrast, hue and colour saturation were adjusted in several iterations using CurvesTransformation with masks as required. The DarkStructureEnhance script was applied with a strength of 0.3 and 8 layers. The image scale was returned to the native scale of the camera/telescope using IntegerResample to downsample by a factor 2.