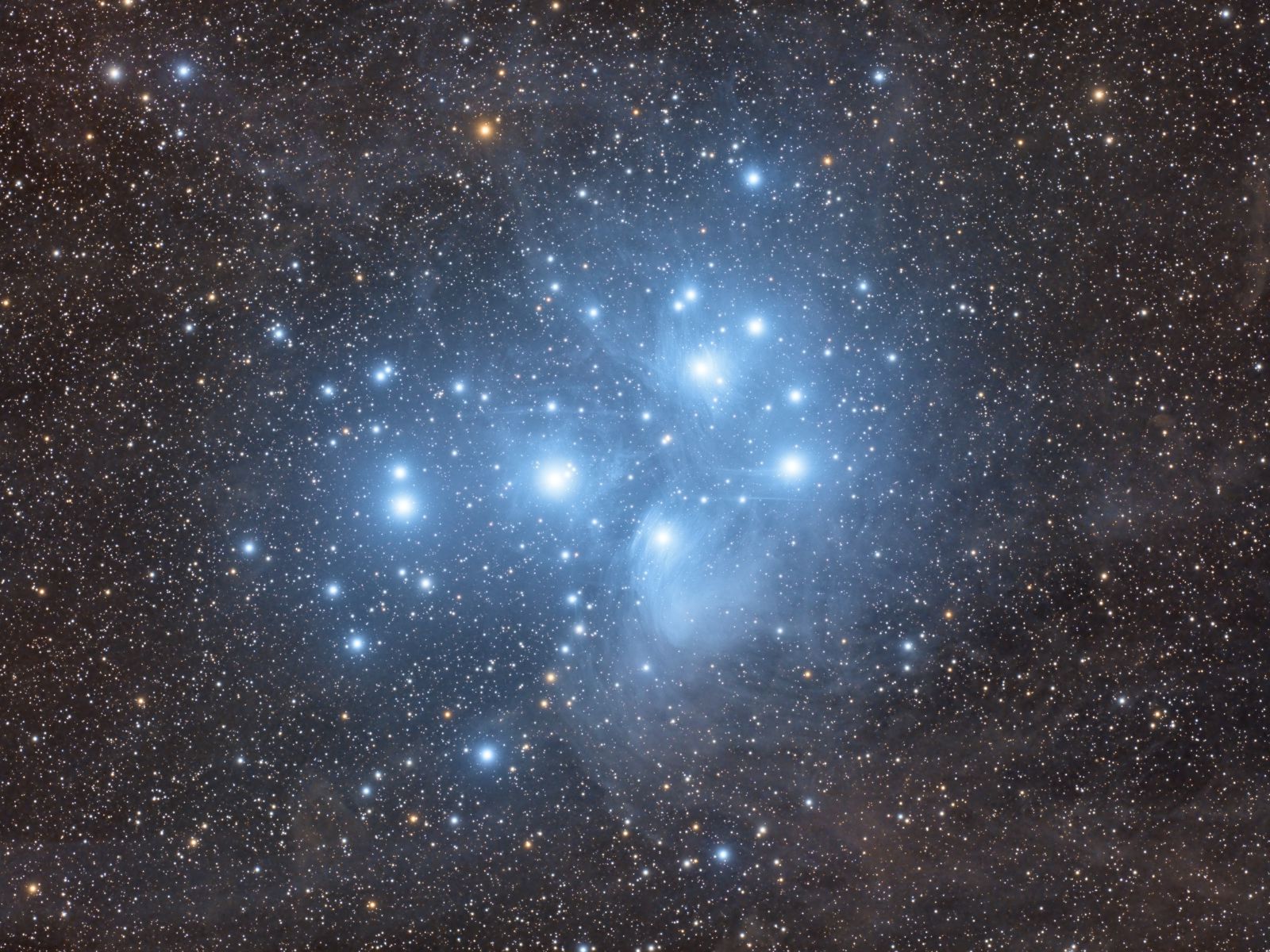 The Pleiades was observed and written about long before Messier catalogued it. Galileo published a sketch in 1610 that showed 36 stars that he could see with his telescope. The earliest known depiction of the Pleiades is from is about 17,000 years old: a cave drawing in the Lascaux Cave in France. If you get a chance, have a look at this object through binoculars. It is spectacular and well placed for imaging in winter in the northern hemisphere.

The blue haze around this star cluster is a reflection nebula – star light is being reflected of soot/dust particles in the background. There’s also some pinkish emission nebula (NGC 1435) in the lower portion of the nebula and dim brownish dust mottling the outer parts of this field (called “cirrus”). M45 is about 440 light years from us and contains at least 1000 members in the cluster. The stars have been estimated to be between 75 and 150 million years old. The brightest cluster stars belong to class B, and are very hot bluish stars.

Although the star cluster and reflection nebula are the dominant objects in this shot, there are also hundreds of galaxies lying far in the background. I have posted an annotated image from 2017 that highlights the location of some of them. In October 2016 I posted a higher resolution image that shows even more galaxies. I’ve also imaged this in a wider field, in 2020.

Data Reduction and Initial Processing
Preprocessing: The WeightedBatchPreProcessing script was used to create registered files. ImageIntegration followed by DrizzleIntegration (with CFA Drizzle option and scale of 1x) was used to make the colour master. The master was cropped to remove edge artifacts using DynamicCrop.

Gradient Removal: DBE was applied to the master using Subtraction.

Stretching:  HistogramTransformation was applied to make a pleasing, bright image, with background set to an intensity of approximately 0.15.

Deconvolution:  A star mask was made to use as a Local Deringing Support image. A copy of the luminance image was stretched to use as a range mask. Deconvolution was applied (30 iterations, regularized Richardson-Lucy, parametric PSF with size of 3).

Stretching:  HistogramTransformation was applied to make a pleasing, bright image, with background set to an intensity of approximately 0.15.

Contrast Enhancement: LocalHistogramEqualization was applied twice (kernel radius of 20 and 150, each with max contrast 1.5 and amount 0.25).

Sharpening: MultiscaleLinearTransform was used sharpen the lightness using a mask used to target the high signal areas while protecting the stars and the background (bias increased to 0.4 for layer 2 and 0.1 for layer 3).

Final Steps:ExponentialTransformation was applied to boost faint nebulosity using a mask to protect stars and bright regions of the nebula. Background and star brightness, contrast, and colour saturation were adjusted in several iterations using CurvesTransformation with masks as required. ICCProfileTransformation (sRGB IEC61966-2.1; Relative Colorimetric with black point compensation) was applied prior to saving in jpg format.