Skip to content
Previous Next
Pacman Nebula in Two Palettes 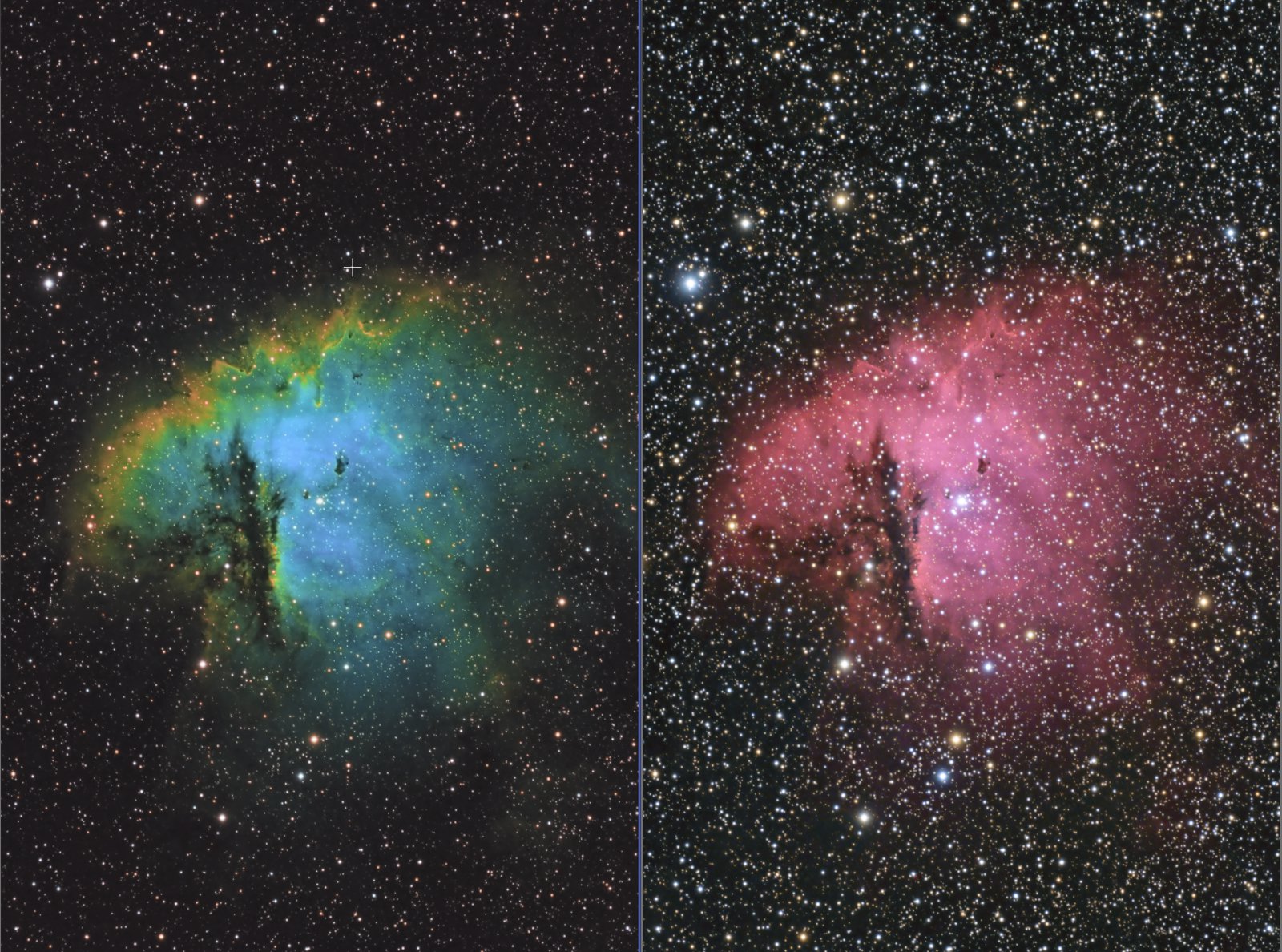 NGC 281 is known as the Pacman Nebula. This nickname comes from its appearance, resembling an early video game character. Open cluster IC 1590 lies near the centre of the nebula. These cluster stars were born out of the Pacman’s hydrogen, and now cause it to glow. Oxygen and sulfur also contribute, but their influence is hard to see in the natural colour version (at right).  The black, dense globules within the nebula are called Bok globules, from which the bright stars are born. The Pacman is about 9,500 light years away, and covers a little more sky than the full Moon.  I have imaged this object previously (most recently in 2018), but the current version shows significantly more detail, particularly in the narrowband version, including lots of curdling in the centre of the nebula and a ton of structure around the dark gash in the nebula. For you Ha lovers, an Ha only version from 2015 is also available.

The blue-and-gold hued image was taken using narrowband filters that pass only a few wavelengths from sulfur, hydrogen and oxygen, which are mapped to red, green and blue. This false-colour or “tone-mapped” palette is aesthetically pleasing, and reveals structures that broadband natural colour images, like the red-hued image on the right, can’t. Hydrogen and sulfur both emit red light, and can’t be distinguished in the broadband image. I used the star colours from the right hand image to lend a more natural appearance to the stars in the narrowband image.

Image scale 1.15 arcsec per pixel (based on monochrome)
Processing for SHO is described below. HaLRGB inset image was processed using a workflow similar to that used for Sh2-150.

Data Reduction and Cleanup
The WeightedBatchPreProcessing script was used to perform calibration, cosmetic correction , registration and integration of all frames.

Deconvolution:  A star mask was made to use as a Local Deringing Support image. A copy of the  luminance image was stretched to use as a range mask. Deconvolution was applied (100 iterations, regularized Richardson-Lucy, external PSF made using PSFImage script with 50 stars).

Combining Luminance and Chrominance
LRGB Combination: The synthetic luminance was applied to the chrominance image using LRGBCombine with default settings.

Sharpening: MultiscaleLinearTransform was used to sharpen Layers 2 and 3 with strengths of 0.4 and 0.1, respectively. A mask was used to limit sharpening to high-signal areas and to protect the stars and background regions.

Hue Adjustment: The green tones were transformed towards blue, and yellows towards red, using CurvesTransformation’s Hue adjustment. SCNR was applied with a strength of 0.20.

Star Colour Adjustment: The a* and b* channels from the natural-colour RGB image were extracted using ChannelExtraction in L*a*b* mode and used to replace the same channels of the narrowband image using ChannelCombination through a star mask, to impart a more natural colour to the brighter stars.

Final Steps: Background, nebula and star brightness, contrast, saturation and hue were adjusted in several iterations using CurvesTransformation with masks as required. The DarkStructureEnhance script was applied with a strength of 0.15. ICCProfileTransformation (sRGB IEC61966-2.1; Relative Colorimetric with black point compensation) was applied prior to saving as a jpg.