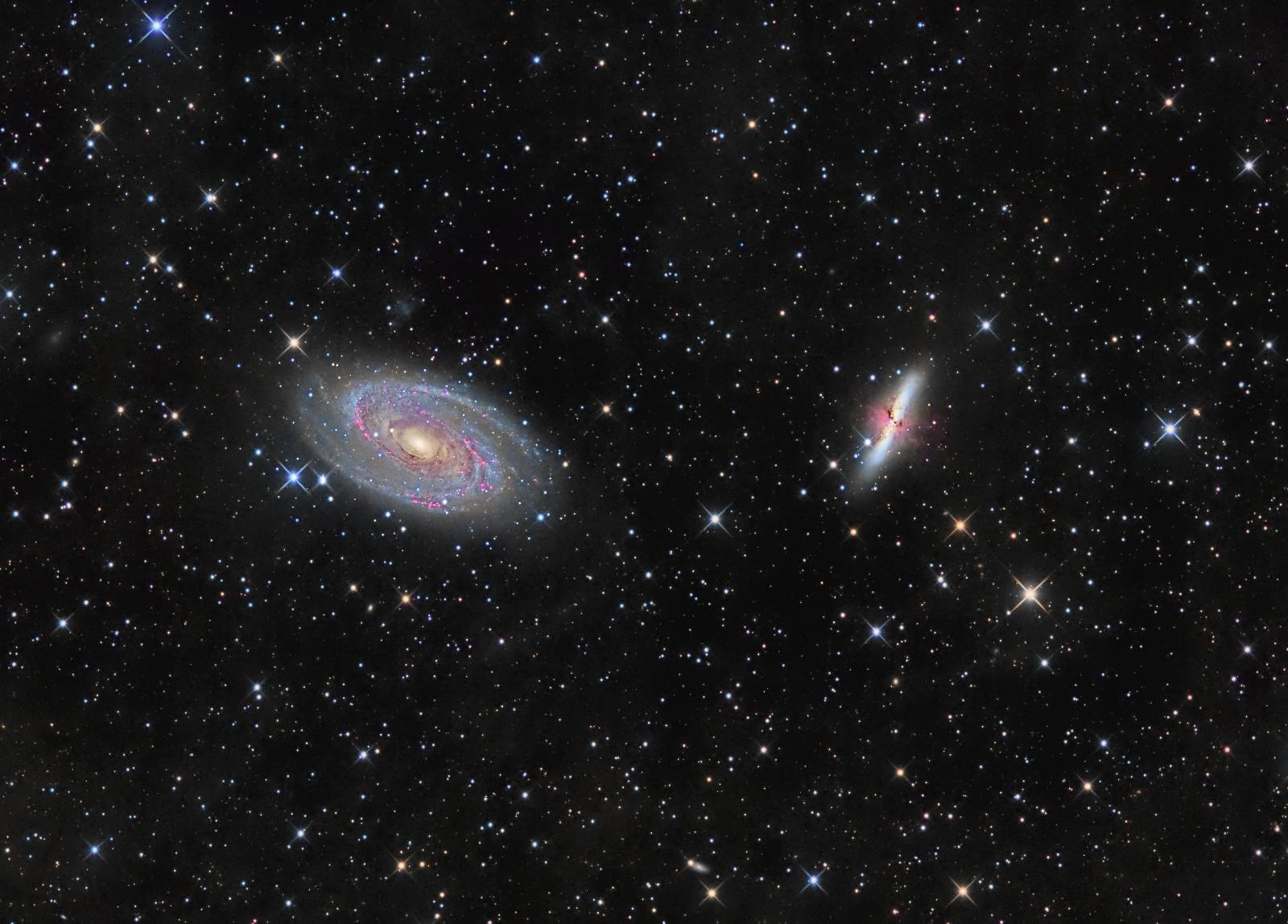 Contrasting its yellowish/brownish core, M81’s spiral arms show clusters of blue stars, similar to star clusters like the Pleiades in our own Milky Way Galaxy. The pink features in M81 are emission nebulae similar to emission nebula like the California Nebula and the Rosette Nebula our own galaxy.

In contrast to M81’s well ordered spiral structure, M82 looks like it is bursting apart. The central area of M82 is spewing clouds of hydrogen outwards in a huge fit of star formation. M82 is classified as an “irregular” galaxy. During the time I took this image a supernova (explosion of a massive star) had just occurred in M82.  It’s shown by arrows in a close-up image of M82.

The slightly unevenness in the background is due to the “Integrated Flux Nebula” — clouds of dimly glowing gas and dust between us and these galaxies.  This is not lit by a single star, but by the integrated glow of all the stars in the Milky Way galaxy.

There are at least 32 other galaxies in the image — look for small hazy patches, short streaks or starlike objects that look a little fuzzy. Click on the thumbnail at right to see an annotated version of the image showing where the galaxies are located. 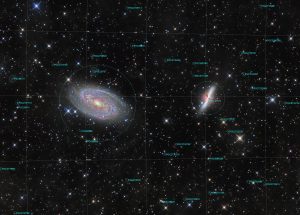 NB-RGB Creation
Creation and cleanup:  The MureDenoise script was run on the Ha master, as it was quite noisy. R, G, B, Ha and L masters were cropped and processed separately with DBE. R, G and B were combined to make an RGB image which was processed with ColorCalibration. The NBRGBCombination script was run using Ha for narrowband red (scale 1.2) and blue (0.02). ColorCalibration was run on the NB-RGB image

Noise Reduction and Re-Stretch: TGVDenoise was applied in Lab mode with 300 iterations (convergence set on at default setting) with a range mask used to protect high signal areas.  This was followed by a HistogramTransformation to raise the black point.

Contrast Enhancement: HDRMultscaleTransform (scale 6, median) was applied to the cores of both galaxies, followed by LocalHistogramEqualization (scale 80, strength 0.5, max contrast 2).  ExponentialTransformation was used with default settings to boost the fainter outer arms of the galaxy and the Integrated Flux Nebula.

Sharpening: The bright parts of the galaxy were sharpened using MultiscaleLinearTransform (Settings for layers 2-5:  0.03, 0.03, 0.2, 0.1) followed by UnsharpMask (scale 0.9, amount 0.5). A mask was used to protect the stars and background.

Final Steps: Large scale noise in the background was reduced with an application of MultiscaleLinearTransform (Layer 5 and 6: threshold 1 and strength 0.5). Background, galaxy and star brightness, contrast and saturation were adjusted in several iterations using Curves with masks as required. A few “hot” pixels were removed with the CloneStamp tool.

Image scale for this camera/telescope combination is about 2.1 arc sec per pixel.