Skip to content
Previous Next
NGC457, The Owl Cluster 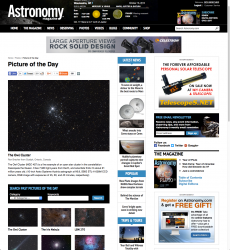 NGC457 is known as the Owl Cluster (also the E.T. Cluster, after the movie E.T.).  It is a fine example of an open cluster, a cluster of gravitationally-associated stars inside our galaxy.  I don’t often shoot these objects, because they tend to look better through an eyepiece than they do in pictures.  However, they make good imaging targets in mediocre conditions.  Other examples include the Double Cluster, and M37.  Whereas globular clusters have hundreds of thousands of stars, open clusters have dozens to hundreds of stars.  Open clusters are easier to resolve into individual stars than globulars, because they are closer and the stars are less densely packed.  This shot shows off the variety of colours that stars can have from quite red, to yellow, creamy, white and blue.  Colour is a function of temperature (redder is cooler; bluer is hotter  — exactly the opposite of how we usually think of red as hot and blue as cold.  I have also imaged NGC457 and neighbouring NGC436 in a wider field.

There are at least a dozen dim galaxies in the field, all 17th magnitude or fainter.  They are tough to spot; look for little smudges or fuzzy “stars.”  The brightest is halfway from the brightest star to the left edge, slightly higher in the image than the brightest star.

Final Processing
LinearMultiscaleTransform was applied to a copy of the image to sharpen the first 5 wavelet layers (no residual).  This image was renamed SS (small scale).  PixelMath was used to subtract SS from the SynthLRGB with no rescaling.  The resulting image was renamed LS (large scale).  Colour saturation was decreased on LS and increased on SS (goal was to increase star core colour and decrease all other colour).  Contrast was adjusted in LS to darken the background.  PixelMath was used to add SS and LS (no rescaling).  Convolution was applied to slightly soften the star cores.