Skip to content
Previous Next
NGC6960 and Pickering’s Triangle 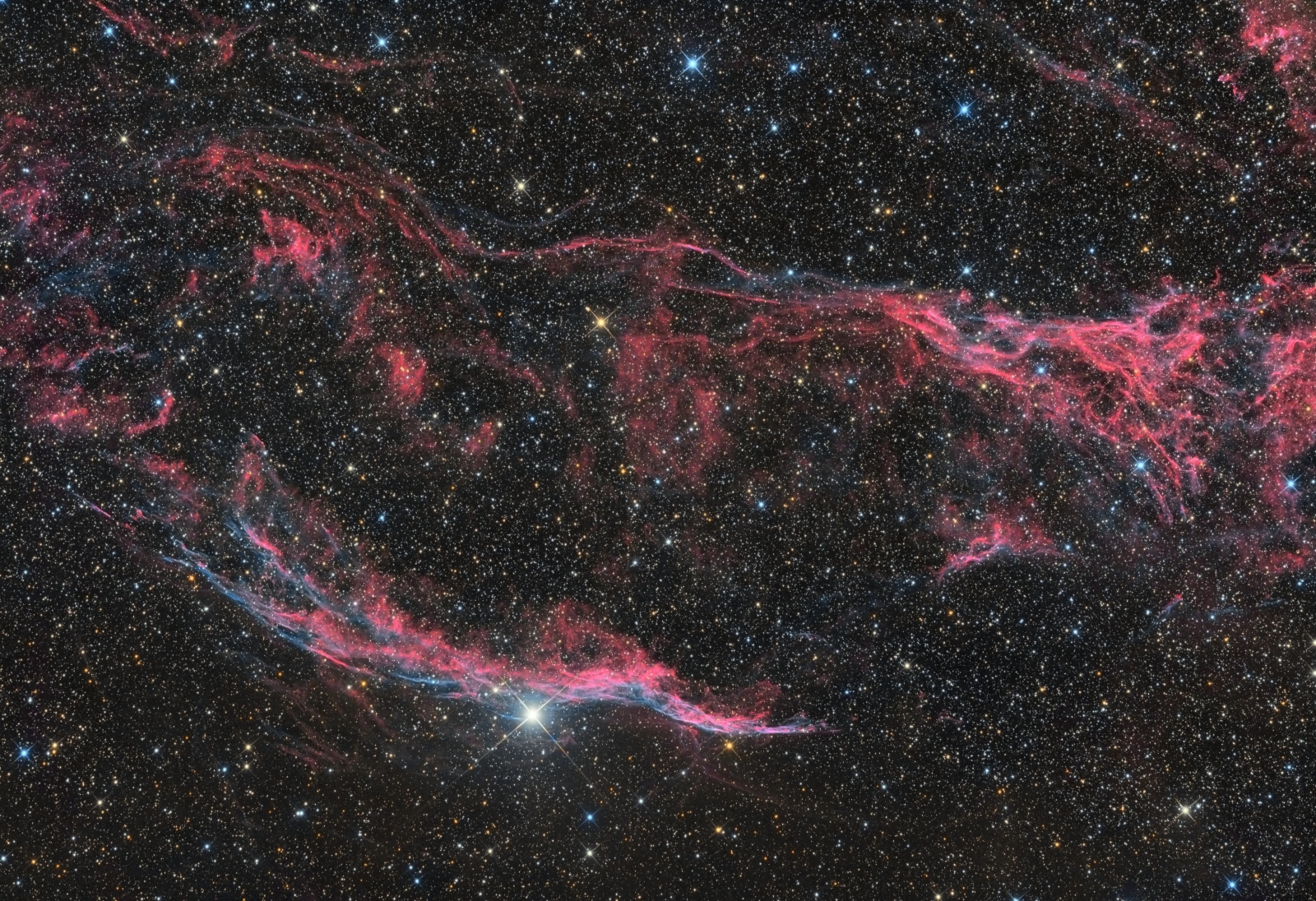 The Veil Nebula complex is huge, covering about 7 moon widths on the sky, so I can’t get it all into one image.  This image shows NGC6960 (sometimes called “The Witch’s Broom”) at lower left, Pickering’s triangle at right and through most of the centre, and a little bit of NGC6979 at upper right. All of these objects are part of a supernova remnant.  You can find an image of the Eastern Veil Nebula here.  A more complete image of NGC6979 is here.  And a high resolution version of the broadest part of Pickering’s Triangle is here.

The supernova that created the Veil Nebula happened between 5000-8000 years ago and the nebula has been expanding ever since.  The glowing gas is mostly hydrogen and sulphur (red) and oxygen (teal) whose atoms are being excited by the pressure waves created by the massive supernova explosion.  The progenitor star whose explosion created this object was about 1,470 light years away.

This image, acquired in the summer of 2012, began as a test shotafter some surgery on my telescope in the summer of 2012.  A bare aluminum part inside the telescope focuser was causing some funny reflections inside the telescope.  My wife, Gail, painted the offending part black.  This required removing the focuser.  After it was replaced I pointed at the Veil and took a test shot.  I liked it and stayed there!

HaRGB:
Ha, R, G and B masters were cropped to remove edge artifacts from stacking. The R, G and B channels were combined to make an RGB image. Ha and RGB were processed with DBE, combined with the NB-RGB script, and Colour Calibration was applied.  PixelMath was used to blend 3.5x RGB with HaRGB with rescaling.  This was done to restore the teal regions of the object.
HistogramTransformation was applied using autostretch settings from ScreenTransferFunction.

Final Steps:  A star mask was used to apply MorphologicalTransformation to the brightest stars (1 iteration; strength 0.51). A contrast adjustment and colour saturation tweak was applied.  SCNR was applied to the background.