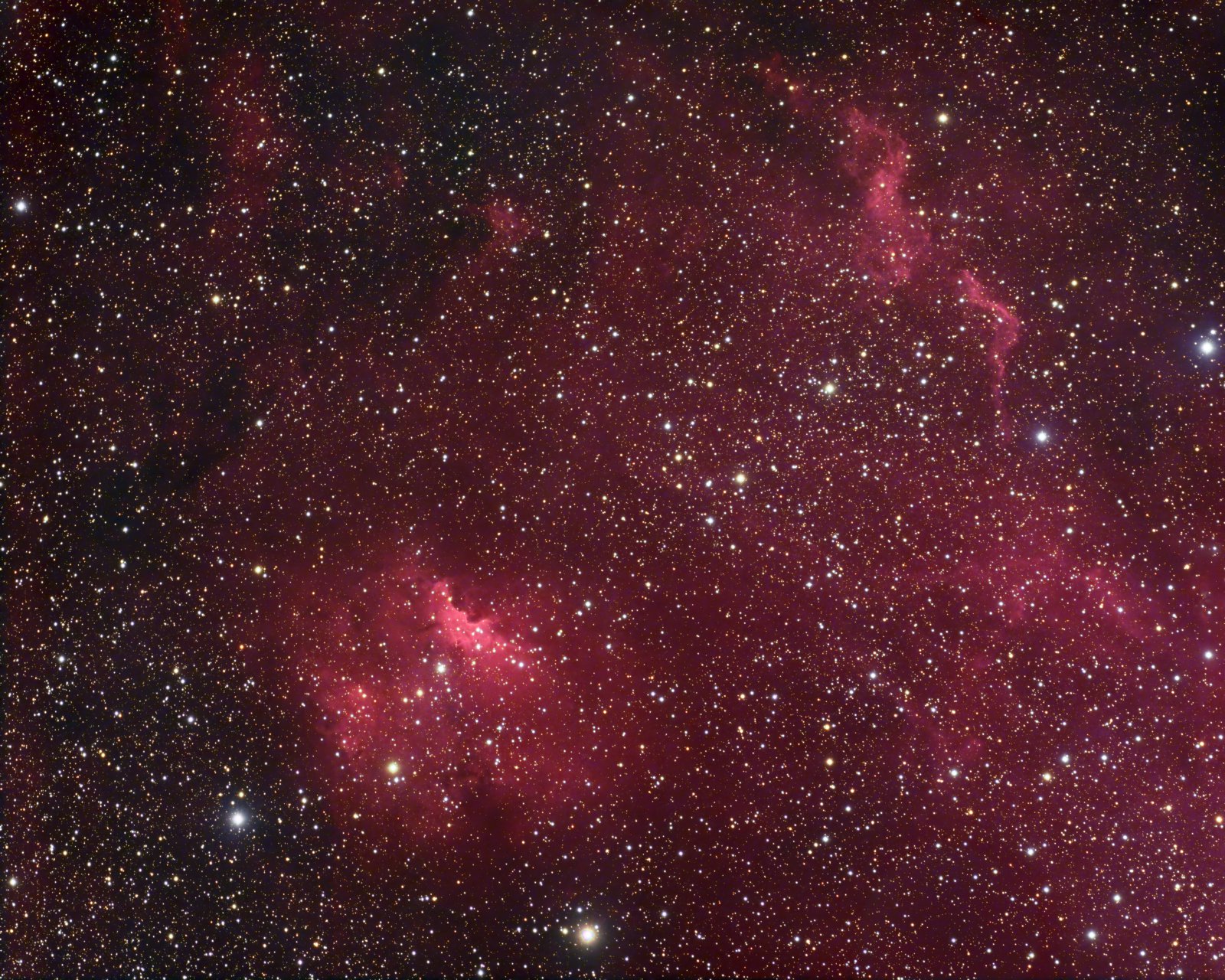 Sh2-135 is the largest and brightest nebula in this field, which lies in Cepheus, approximately midway between the Bubble Nebula and IC1396. I have shot this region before in a wider field, but wanted more detail so I used a longer focal length this time. The estimated distance to Sh2-135, similar to most of the Ha regions in this part of the sky. There are many other catalogued objects in this image. See the annotated image for information. 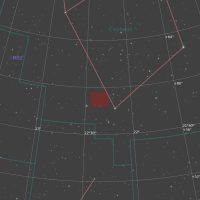 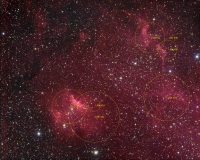 Data Reduction and Initial Processing
Preprocessing: The WeightedBatchPreProcessing script was used to create Luminance and H-alpha master frames from the mono camera and an RGB master frame from the one-shot colour camera. DrizzleIntegration (2x CFA Drizzle) was applied to the RGB and Lum sets. The RGB and Ha masters were registered to the Luminance master using StarAlignment.

Luminance and H-alpha
Deconvolution:  A star mask was made from the Luminance master to use as a Local Deringing Support Image. A stretched clone of the H-alpha image was used to make a mask selecting bright regions of the nebula for deconvolution. Deconvolution was applied (30 iterations, regularized Richardson-Lucy, ParametricPSF mode with default settings; Global dark deringing = 0.02; Global bright deringing 0.007).

Combining Luminance, Colour and Ha Images
Luminance addition: LRGBCombination was applied to replace the lightness of the RGB image with the Luminance master.

Star Removal:  StarNet v2 was used to remove stars from both the LRGB and Ha images.

Additional Processing
Nonlinear Noise Reduction: NoiseXterminator was used to reduce noise in the background areas of each image with settings Amount=0.9 and Detail=0.25

Sharpening: MultiscaleMedianTransform was used with the same mask used for Deconvolution to sharpen Layers 1 – 4 with strengths of 0.05, 0.2, 0.1 and 0.05, respectively.

Star Restoration: The stars extracted from the LRGB image by Starnet2 were added back into the image using straight addition in PixelMath.

Star Reduction: MorphologicalTransformation was used in Morphological Selection mode to slightly reduce the size of stars.

Final Steps: Background, nebula and star brightness, contrast and saturation were adjusted in several iterations using CurvesTransformation with masks as required. ICCProfileTransformation (sRGB IEC61966-2.1; Relative Colorimetric with black point compensation) was applied prior to saving as a jpg.