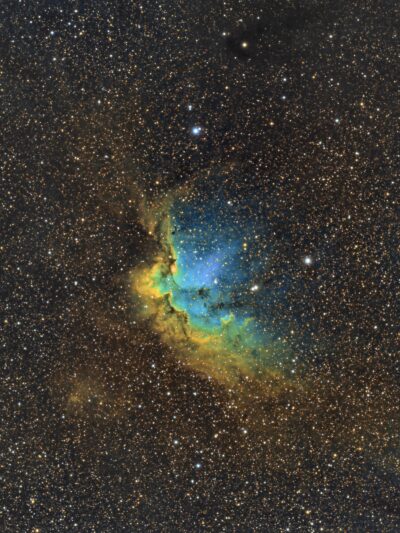 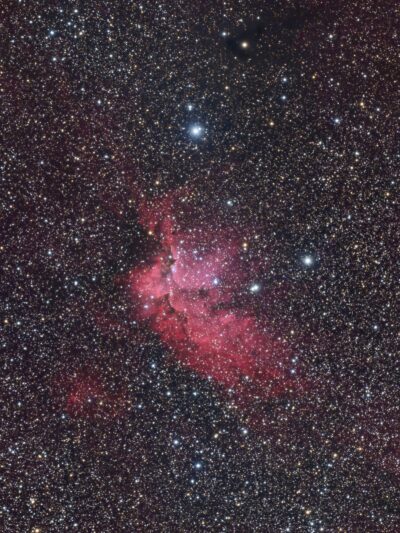 The Wizard Nebula (Sh2-142) is an emission nebula in the constellation Cepheus, who was a king of Ethiopia. Personally, I don’t see a wizard no matter which way I rotate the picture, but maybe someone can set me straight. The object is made mostly of glowing hydrogen atoms, but other elements like sulfur and oxygen also contribute. Just right of centre is the star cluster NGC 7380, but I find it hard to see against the rich background of the Milky Way. Both the cluster and nebula are a little more than 7,000 light years away, relatively close in cosmic terms. The small patch of nebulosity at lower left is Sh2-143.

The blue-and-gold hued image was taken using narrowband filters that pass only a few wavelengths from sulfur, hydrogen and oxygen, which are mapped to red, green and blue. This false-colour or “tone-mapped” palette is aesthetically pleasing, and reveals structures that broadband natural colour images, like the red-hued image on the right, can’t. Hydrogen and sulfur both emit red light, and can’t be distinguished in the broadband image.

Stretching: HistogramTransformation was applied to make a pleasing, bright image, with background set to an intensity of approximately 0.12

Hue Adjustment: The ColorMask script was used to  create a mask to select green regions.  The green was transformed towards blue, and yellows towards red, using CurvesTransformation’s Hue controls.  The Hue channel was extracted from the RGB image was extracted using ChannelExtraction in HSL mode and used to replace the same channel of the narrowband image using ChannelCombination through a star mask, to impart a more natural colour to the brighter stars.